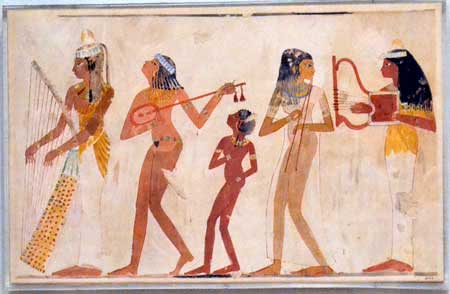 We all know what guitars are ; we know what they do and what they sound like. But where did they come from?

The history of what we know of as the guitar starts less than 200 years ago - but instruments similar to guitars have been around for a lot longer than that. In fact, drawings of instruments closely resembling guitars found in the Mesopotamian and Babylonian areas were found to be over 3000 years old . Many historians also agree that the possibility of stringed instruments such as these existing before recorded history is very likely.

We're not gonna sit around and talk about the what-ifs of prehistoric times, though. We're gonna talk about what are arguably the forefathers of almost every guitar-like stringed instrument out there: the tanbur and the oud. 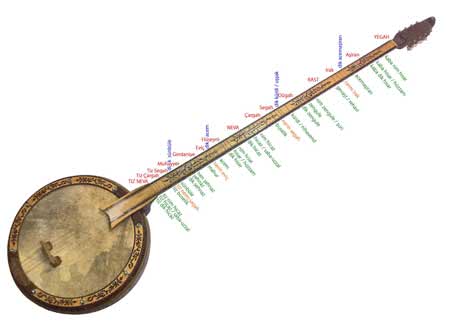 First, let's talk about the tanbur. The tanbur is a very, very old instrument. The Persian/Kurdish tanbur is a pear-shaped instrument with a deep hollow and traditionally made of Mulberry wood. It has a long neck with around 14 frets and two to three strings connected to front and side tuning pegs. The traditional tanbur was carved out of a single block of wood, but is now made using ribbing instead of carving. Originally, much like many ancient instruments, the tanbur was fretted and strung with guts of slaughtered animals, usually cats or cows.

The origin of the tanbur is currently unknown, as it dates back to before recorded history. The first record of it, however, comes from ancient Babylon. There are also sculptures and statues depicting a similar instrument in ancient Egypt (circa 600 B.C.E) and Greece, though the Greeks had renamed it pandoura. It's also been known to have been used by the Zoroastrians and Sassanians. It was used by court performers and peasants alike.

Unfortunately, the name tanbur, has been used for many instruments in recorded history, so there some confusion over what really constitutes as a tanbur. However, most historians believe the Persian tanbur is the original, and regard that as the true tanbur.

The instrument was made popular in the 12th century by Shah Khoshin, and was used exclusively for prayer and meditation within the Ahl-e Haqq. In fact, no one outside of the Ahl-e Haqq played the tanbur; the songs written for prayer were also guarded closely. Song and technique were passed down from mentor to student, since the Ahl-e Haqq began using it in the 14th century. For 700 years, the tanbur was a secret for the Ahl-e Haqq only, but is now contributed as the ancestor of the guitar, buzuki, tamburitza, tambura, and sitar.

For thousands of years, the tanbur only had two strings. That is, until Nur Ali Elahi - a peerless master of the instrument - added a third string and 14th fret. His innovations were extremely important, and spurred on an era of evolution, in both playing technique and form. 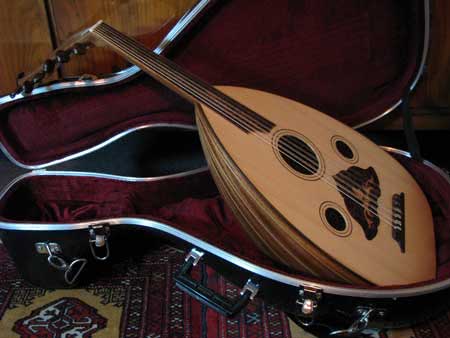 The oud is considerably less secret, and is the ancestor of the modern lute. It was created in Arabia over 3,500 years ago and is similar to the tanbur, but with 10 to 12 strings, no frets, a shorter neck, three sound holes, and a slightly rounder body. Some say that the oud is one of the oldest instruments in the world, and is considered one of the most central instruments in the Middle East. It's often thought of as the forebear of the Persian barbat and the inspiration of the Egyptian hieroglyph nefer.

The oud was brought into Europe via north Africa when the Moors invaded Spain in the 9th century. The oud eventually transformed into the lute. It was given more strings - anywhere from 15 to 24 - and fretted, although it was still played with a feather, like the oud. The lute was fretted to adhere more to Western scales and music, while the oud was unfretted so Arabic musicians could play quarter-tones. 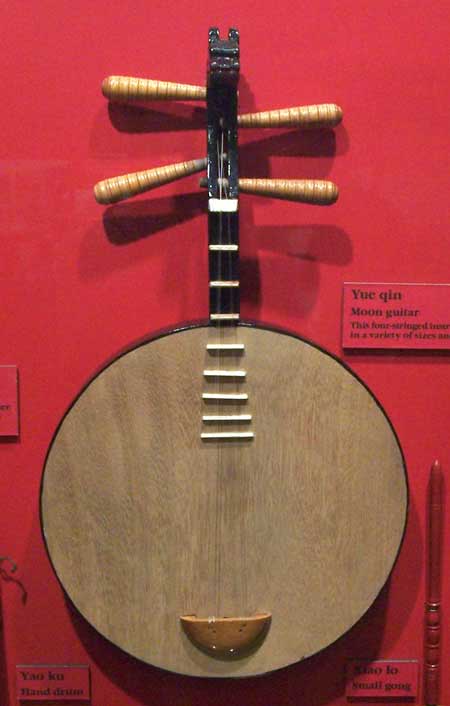 Remember when I said 'almost all guitar-like instruments'? Well, the Chinese have their own ancient guitar - the qin-pipa. The qin-pipa was created in roughly 200 B.C.E., during the Qin period. However, before that, there was the xiantao: an instrument that was played horizontally and is considered the predecessor of the qin-pipa. It is said that the workers forced to build the Great Wall of China played the instrument, and used songs to 'express their resentment'. Eventually, the original design of the qin-pipa became known as ruan, after a master of the instrument, Ruan Xian.

The traditional qin-pipa looked much like what we know of as a banjo, but eventually became elongated and pear-shaped like the oud (tang-pipa). However, the qin-pipa had frets and only 4 strings (as opposed to the 11 of the traditional oud). During the Tang Dynasty, musicians from Persia brought with them their barbat and performed for the Emperor.

This is when the qin-pipa began to transform. It morphed to look a bit more like the modern lute, and became the tang-pipa. The playing style had also changed, and instead of playing horizontally with a plectrum, they began playing it much like the lute and guitar, using their nails instead of plectrums. Once steel string became the norm, instead of silk strings, they had to switch back to plectrums.

These new plectrums are shaped much like fake nails, attached to each finger of the right hand to strum. Up until the middle of the last century, the tuning of the tang-pipa was still pentamic, but it is now chromatic. This created the new, modern pipa.

Ancient history is full of stringed instruments. Each culture had their own variations, twisted and evolved from where countries clashed and merged. There is no direct line between modern instruments and their ancient counterparts. They're all convoluted and knotted, but if you follow the thread carefully enough, you can see where dozens of different instruments and cultures came together to create what we know today. So next time you pick up a guitar , try and remember just where it came from.

Sarah Jacobs is a keen blogger and has written many articles, primarily about guitars and ukuleles for Know Your Instrument . When not writing about guitars, Sarah enjoys the great outdoors and walking her pet dogs.