This lesson will teach you everything you need to become a guitar scales master.

After learning strumming chords, the next most common step is to start playing single-note melodies, and knowing your scale patterns is helpful for this process. So let's get started! 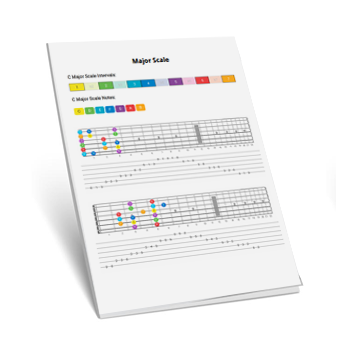 To help you learn guitar scales in the most effective way, we have created this downloadable free resource. It contains the fretboard patterns for the most used guitar scales. Download it for free by clicking the button below:

Get The Free Guitar Scale Ebook

What Is A Guitar Scale?

Scales are not the same as chords. When we practice scales we play them one note at a time, unlike a chord in which you play all the tones simultaneously.

Let's see this example on the guitar: take the C note at the 3rd fret of the A string , and the C one octave upper, at the 15th fret of the same string.

If you count the number of the frets between the lower C and the higher C, you get 12. So this confirms that an octave spans 12 frets .

Of course, this holds true for ascending and descending both (from the lower C to the upper and from the upper to the lower)

The most important thing you must understand is that scales are not patterns. See a scale as a sound: each scale type has its own characteristic sound. Patterns are just ways to play scales on the guitar fretboard, due to the nature of the instrument.

The relationship between each selected fret determines the scale structure and thus its name. We can create scales of all of the types. Probably you've already heard of major, minor, pentatonic, harmonic minor, whole-tone , augmented , lydian, dorian, to name a few; there is even a Neapolitan scale. Later in this article you'll find a table with all guitar scale.

Each scale type has its own unique combination of distances between the frets in the octave. This is called scale formula.

In music theory, frets translates to semitones, or half-steps. On guitar, it's safe to consider frets, semitones and half-steps the same measure.

Distances from the root are called intervals.

Usually, there are 7 notes to each scale within a one octave range, but not always: pentatonic scales have 5 notes, and there are even scales, like bebop scales, that have 8 notes!

Considering that the scale doesn't change with an octave change we don't need to repeat it past 7 notes.

A C scale will always end and start on a C, and the same for each successive note. So a C major scale spanning 2 octaves is simply:

How To Read Guitar Scale Diagrams

Playing scales horizontally, on one single string, is a great way to visualize and understand the structures, but is impractical when it comes to making music, so usually, we use patterns that use all the strings.

Let's see how to read the scale diagrams that you'll find in this article. Have a look at the diagrams below, that shows you the C major scale

Often, on the Internet, you'll find scale tabs. Tabs are of course far more popular than actually reading music because they use specific fret numbers of what to play.

Did you notice that the C major scale pattern above is just four frets wide? We call these box shapes, they span 4, 5 or 6 frets.

The reason why guitarists prefer to play scales along these box patterns are that the motion if more efficient: 1 finger for each fret (we're going to see this topic in the following)

The great thing about a guitar scales box is that it will work anywhere you place it on the guitar as long as you follow the pattern.

Each scale type has a specific box pattern which can be shifted to other keys. So, for example, if we want to play a D major scale , we move up the C scale pattern by two frets. Want an F major scale? Move the C pattern up by 5 frets!

To play the F major scale, we move the C major scale pattern five frets up, so that the root of the pattern (yellow note) is F

If you want to understand better how and why the frets are placed across the strings, have a look at the guitar notes tutorial .

The Most Common Used Guitar Scales

Here below you find some of the most used guitar scale.

The major scale is the foundation of Western Music so here it's the first in the list.

Pentatonic scales are composed of 5 notes (penta) and the Major pentatonic is a Major scale without the 4th and the 7th.

The Minor pentatonic is another 5 notes scales.

The same concept can be applied to open major scales

The Blues scale is a Minor pentatonic with a flattened 5th added. It has a unique sound that you immediately recognize.

The minor scale is another important scale to learn, and it's the relative to the major scale.

The Dorian scale is massively used in Jazz and Rock; it's a variation of the minor scale.

The Mixolydian scale is a Major scale with a flattened 7th, it has a Bluesy feeling.

The Lydian scale, thanks to its raised 4th, has an unique dreamy effect.

You find many more guitar scale diagrams in my complete ebook Scales Over Chords.

In the following video you find some other nice scale patterns:

How To Play Guitar Scales and Exercises

There are different ways to play scales on the guitar. Due to the nature of the fretboard, we have multiple options for going from one note to the upper octave.

This is the common method for beginners when first learning to play scales. There are four frets for each finger, keeping your scale in a nice box already to play without much hand movement.

Each finger frets the notes on the nearest fret (for example, index finger on fret 1, middle finger on fret 2, ring on fret 3, and the pinky on fret 4)

This is a way of playing scale often used by heavy metal shredders, and fast picking guitar players. Basically, your fingerings have exactly 3 notes per string: this is useful for high-speed alternate picking and legato.

The picking patterns are equal on all the strings (down, up, down, next string and repeat) and this allows very efficient motion .

When you play with legato , you pick only the first note on each string; again this is efficient.

Scales boxes and patterns are useful, but when you'll advance in your guitar studies you could feel yourself trapped in these fixed schemes.

Here below you find a great exercise that will help improve your scale speed and agility. It's based on the C major scale, I suggest to approach the pattern with the medium finger at the 8th fret.

Here's a chart with the most used scales. Each link will take you to a new page that shows you several fretboard patterns for playing that scale.

P.s. All the charts show the scale with the note C as the root, you can move the patterns up and down the neck to play a scale with a different tonic.

If you wonder where all these scales come from, you need to learn a bit about modes, a concept strictly related to scales, be sure to have a look at modes tutorial.

Also, is really important to practice scales in context, over a backing tracks or other means.

Be sure to download the Guitar Scales Patterns and Arpeggios Ebook . It's an handy reference pdf with tons of fretboard scale diagrams that you can print out.

You'll find the ebook in your free download area .

Modes from the Major Scale

Modes From The Harmonic Minor Scale

Modes from The Melodic Minor Scale

Which Scales Should I Play Over This Chord? 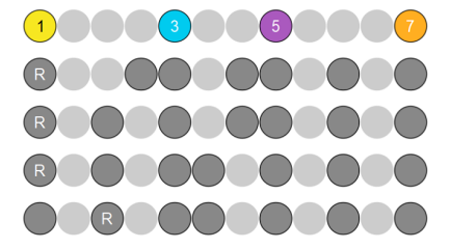 Which scales play well over those chord types? A good approach is to check the tones that compose the chord and what scale matches well with them.

You can learn more about this method in my scale chord application tutorial.

Our introduction to guitar scales ends here. I'll leave you with some more resources to further deepen your music knowledge.

This ebook is all about guitar scales.

You'll find plenty of 1 and 2 octaves patterns over the entire fretboard.

To further experiment with scales, fingerings, and keys, try our Guitar Scales Finder.

It's a free interactive tool that will help you learn you more than a hundred scales patterns. It's also available for left-handed guitar players , bass, ukulele and alternate tunings.