Play over backing tracks helps you improve your improvisation skills. There are some adjustable backing tracks software that let you play with a virtual band

The old adage about learning any instrument still rings true today; playing with other people is one of the best ways to grow as a musician. But what if you’re in a situation where you can’t find anyone to practice with? What if no one else wants to stay up until 5 AM going over chord changes to your favorite songs? While jamming with friends is certainly the most fun and social way to grow, if that’s not an option, customized backing tracks can be a very useful tool.

Traditionally, several publishers have released collections of backing tracks. Some of the more popular series, including those published by Music Minus One and Jamey Aebersold , are some of the best-selling practice tools of all time. One drawback to these pre-recorded backing tracks is that they are often not customizable. Many times, each track is released in several different keys, tempos, and styles, but this results in purchasing a collection of music that contains many tracks you will never use. Luckily, for today’s musicians, plenty of ways to customize, or create your own, backing tracks exist.

If you need a quick and easy tool to generate backing tracks, on this website is available a free online app that let you create simple 4 chords progressions. Check it out!

One of the more famous software options for creating your own backing tracks is Band-in-a-Box . Band in a Box allows the user to program custom chord progressions and tempos, as well as practice to pre-loaded tracks. This software has come a long way since its inception; now in its 12th edition, Band in a Box allows for expanded time signatures and features a virtual “soloist,” that will create what the developer describes as “awesome sounding” solos to any chord progression you enter. The sounds included in Band in the Box are better than most software options out there; it’s not just your standard MIDI accompaniments. While this doesn’t really affect the harmonic qualities of the chord progression you’re practicing along with, it does enhance the experience. In the 12th edition for Mac, you can also import files from Apple’s GarageBand software. Band-in-a-Box Pro 2013 comes in at around $100, depending on the retailer, but offers a lot of features that some cheaper programs leave out.

Another very easy to use and much cheaper program is ChordPulse. ChordPulse offers is a very functional backing track creation software. It is literally 1/4 of the price of Band in a Box, so it’s not as fancy or as loaded with features, but it gives you absolutely everything you need to create practice tools. You can select from a variety of styles and sounds, and the interface is very easy to use. A fully functional 14 day trial of ChordPulse is available through the developer’s website . One of the drawbacks to ChordPulse is that it’s only available on Windows, but if you have the right operating system, this can be a handy and affordable tool for honing your skills.

Another option to create your own customized backing tracks is to record your own into a digital audio workstation, or DAW. This can be as simple as recording the chords to your favorite song so you can practice along to them later, or recording a bass line alone so you can practice “comping,” or the art of accompanying a bass line with chords. There are plenty of DAW options available, and as with everything else, they run from cheap and simple to extremely expensive and complicated. There are also many free ones; Mac computers generally come pre-loaded with GarageBand, which has more than enough capability to help someone produce a simple backing track. Many software companies also offer a free download or a trial period for their products. Check out Cakewalk, Cubase, Logic, or Pro Tools for a wide range of DAWs. Of course, you can also use the tried-and-true method of recording a guitar using a microphone and tape recorder (if you can still find a cassette tape today)!

Now that we’ve taken a look at a few different ways to create customized backing tracks, let’s take a look at how to put them to use in practice.

In my over 5 years of teaching and 15 years of performing, the one question aspiring musicians ask me is, “how to I learn to improvise?” The answer is easy – just do it. You can memorize all the scales, modes, chords, and theory fundamentals in the world, but they won’t do anyone any good unless they’re put to use! Let’s take a look at one of the most common progressions, a 12 Bar Blues, and look at improvising over this progression.

The 12 Bar Blues is a chord progression that occurs over and over in popular music. Many jazz standards, folk songs, and rock and roll classics follow this pattern. Here’s what a 12 Bar Blues in the key of C would look like in ChordPulse: 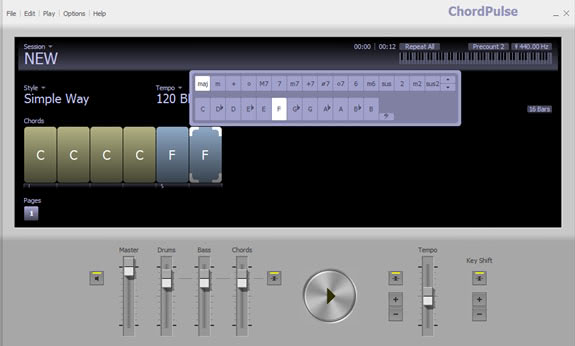 So now, as you can see, you have a chord progression that you can repeat over and over to try different licks and scales. To get started, try using a “blues scale” over this progression. Since we’re in the key of C, we’re going to use a C blues scale. You can play a blues scale on any instrument and in any key! The formula for a blues scale is 1, b3, 4, b5, 5, b7. If you have no idea what this means, that’s ok! I will cover this theory in a separate article, but just know that the notes you want to play are C, Eb, F, Gb, and Bb. You can do these in any octave you chose.

Play the backing track, and play the scale in order, up and down, a few times. Then create a two-note phrase and repeat it over different chords. Slowly expand your phrase to three notes, four notes, etc. until you are comfortable with soloing over the chord progression. Keep in mind that this is a long process; you probably didn’t learn to talk in a week, so learning how to talk with your instrument is going to take some time as well.

This is just one way to use a backing track to get better at your craft. Remember, you can use any instrument you want to practice along to your customized backing track; they’re not just for guitarists! These tools are easy to create and are incredibly useful to learn improvisation, comping, bass lines, vocal harmonies, and pretty much anything else you want to learn when it comes to your music. Dust off your instrument and get to practicing!