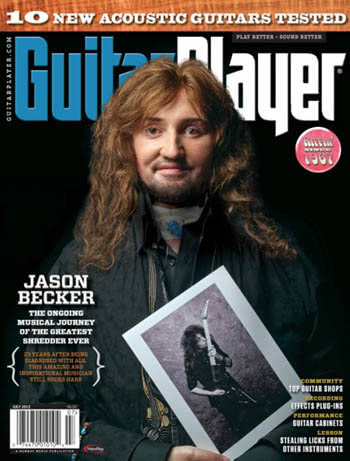 You know, I’ve always believed that great talent exists around us in abundance . What’s truly rare is the hard work and resilience it takes to take that talent and forge it into something of transcendence. And if there ever was a musician who epitomizes this amalgamation of incredible talent and infallible resolve, that’s Jason Eli Becker .

Born on the 22nd of July, 1969 to Gary and Pat Becker, in Richmond Hospital, California , Jason’s first forays into the world of music and guitar came at the tender age of five. Influenced by his father and uncle, both accomplished guitar players with strong classical and blues influences , what truly set the five year old Jason apart was his work-ethic. Sure, most kids who pick up the guitar at such a young age dream about someday becoming a guitar god, but most rarely manage to find the discipline and dedication needed to make these dreams a reality. Jason, however, was soon practicing over ten hours a day and playing his favorite Clapton and Hendrix tunes note for note. In fact, Jason got so good so fast that he was gigging regularly by the time he was in sixth grade and even giving lessons to his own music teacher.

These early influences, along with the likes of Stevie Ray Vaughn, Jeff Beck and shredders like Eddie Van Halen and Yngwie Malmsteen shaped mold Becker’s playing into the perfect marriage of speed, technicality and soul. In fact, at the tender age of sixteen, Becker was playing at a virtuoso level and entertaining audiences by playing super fast licks and complex guitar passages with one hand while yo-yoing with the other! But what truly defined and set apart Jason’s musical ethos was the various types of world music , ranging from classical, jazz, blues, rock, Indian, Native American and even Japanese music, that he started absorbing religiously.

Jason’s big break came when word of his playing reached living guitar legend Marty Friedman . Marty immediately got in touch with Jason and the two formed a guitar duo named Cacophony. Their debut album, " Speed Metal Symphony " was released within a year and the album is still worshipped as one of the most virtuosic masterpieces of guitar work that combines immense technical ability with undeniable melodic essence. Jason was soon touring with Marty and playing regularly to tens of thousands of people across Japan and America .

It was around this time that Jason’s name really started circulating in the L.A music scene, and in 1989, at just 20 years old, Becker managed to land a gig that most guitarists would kill for – replacing Steve Vai in David Lee Roth's band . Although this would have felt like a pretty damn big deal to Jason Becker, Roth writes in his autobiography that he actually felt like the lucky one to work with Becker. He writes that, "trying to hire genius is like designing art by a committee – damn near impossible. But I came so close you could feel the heat coming off it, with a fellow named Jason Becker ."

At just 20 Jason Becker had so far managed to do what most guitarists take a lifetime to accomplish. He was on the very top of the guitar world with millions of adoring fans and thousands of followers , and at an age where most guitarists would still be honing their chops, he had already been a part of some of the most iconic pieces of guitar music ever recorded. But lady luck is as fickle as she is capricious, and it was at this highest point in his life that Jason’s world was torn apart.

It all started with a strange "lazy limp" that Becker noticed in his left leg while recording the David Lee Roth album "A Little Ain’t Enough". And although this limp would cause him to trip and fall at random, Becker didn’t take much notice of it until a strange sensation of numbness started to spread to his other leg and hands. Urged on by his friends and family, Becker finally got himself checked out and was diagnosed with ALS or amyotrophic lateral sclerosis . Also known as Lou Gehrig’s disease, the condition was a degenerative nerve disease so debilitating that doctors at the time gave Jason just three more years of life at best.

In fact, Jason’s case was seen as so hopeless that doctors even went as far as telling him to not bother changing his diet because there was absolutely no hope of recovery. But at the boisterous age of 20 with the entire music world at his fingertips, Jason’s only response had been, " no way, I have things to do and I'm invincible. "

However, within weeks the effects of the disease started to increase and Jason barely managed to finish recording the album with David Lee Roth. By this point his hands were starting to get so weak that he had to use progressively lighter gauge strings on his guitar to even be able to finish recording the album. And although the album went gold and was a worldwide hit, Jason’s condition made it impossible for him to join the band on tour to promote the record.

Jason's condition continued to worsen over the next few years, but his passion for music and will to survive continued to prove stronger than his disease. Although his weakening hands were never able to do the same things he once did with the guitar, Jason continued to compose new music with the instrument. When he lost what little strength he had in his hands to hold the guitar, he turned to composing music with a keyboard .

And when he completely lost the use of his hands, Jason kept composing with the help of a special computer that responded to his head movements. The computer's mouse pointer would move inch by inch in response to Jason turning his head, and would click when Jason opened his mouth. And using this computer , Jason spent five years painstakingly composing music for his second solo album " Perspective ".

Half a decade might seem like a long time to record an album, but we can only imagine how difficult it would have been for a musical genius like Becker. In fact, during a T.V. interview around the time he released "Perspective" a reporter asks Becker if he still has new music ideas in his head and Becker's eyes light up as he responds saying that he has so much flooding into his mind each moment that it drives him crazy .

Now in his mid 40s, Jason's condition has remained stable since 1997 . A remarkable thing in itself considering the fact that he wasn't given more than a few years to live by doctors that diagnosed him. But the real miracle is the fact that to this day, Jason still continues to compose and release music that uplifts and inspires tens of thousands of people the world over. Since 'Perpetual Burn' Jason has released two more studio albums and is also working on a movie about his life with actor Matt Schulze . 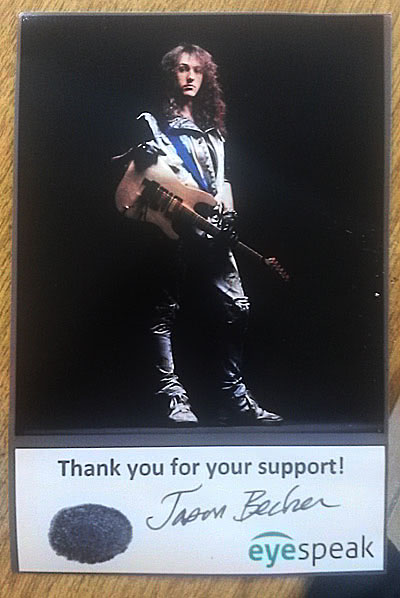 Recently Jason has been involved in the EyeSpeak project . My site supported the fundraising on KickStarter and Jason sent my this postcard with his fingerprint. I'm really proud to help this kind of projects. The aim of the Eyespeak project is to create eye tracking augmented reality glasses with hands free interface, designed for SCI, ALS and MD patients. Learn more here .

Most of us live under the impressions that our lives are infinite . We keep putting off what we can achieve today until there isn't any more time left for us to chase our dreams. But think about this – if a man who has lost pretty much every physical function of his body can continue to chase his dreams and make a change in this world , why can’t you and I who are still blessed with the full use of our bodies and minds achieve all that we have the potential to achieve? In Jason’s own words, " We live thinking we will never die, we die thinking we have never lived. Cut it out! "