Guitar players are notoriously lazy when it comes to learning music theory. We tend to look at the guitar chords and scales as a series of patterns to be memorized. 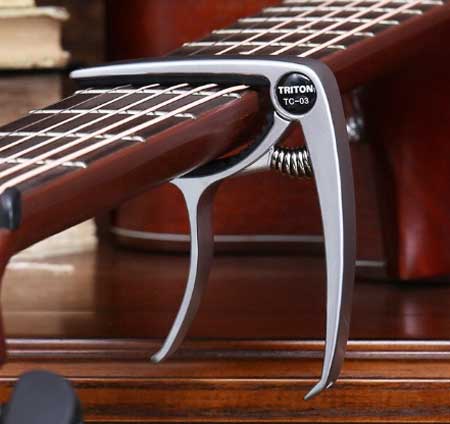 While this approach can get you playing your favorite songs without knowing the names of the notes or chords, this presents many challenges when we start jamming with other musicians.

There's nothing worse than being handed a chord chart you don't understand or being quickly told a key signature in which you can't remember which notes make up the scale.

In this blog post, I'll help you understand how the ordinary capo can unlock the basics of music theory easily and quickly.

These little tips will help you gain confidence when talking with other musicians. They also will help you apply more advanced guitar chords to your playing practically and easily.

The challenge with playing guitar is that specific popular key signatures require you to use barre chords.

For example, the F Major in standard tuning requires you to use your index finger to press all six strings down on the first fret for the F chord. This is a more challenging chord for new and intermediate players.

It only gets more difficult as you start playing up the fretboard and rely on barring for almost all of your chord shapes.

The power of using a capo is that you can leverage it to act like your index finger so you can play more difficult chords more easily. 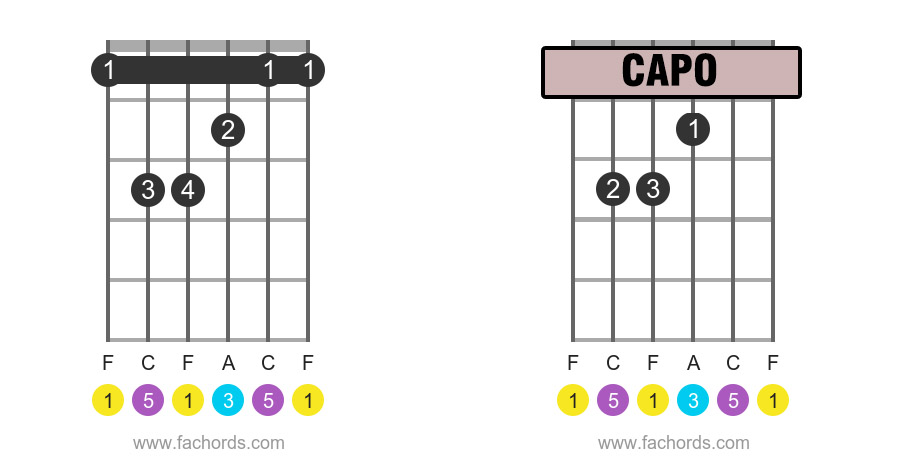 With a capo on the first fret, you can play the F major chord using the E major open chord shape.

In fact, when using a standard guitar capo, you can play any key on the guitar using G major chord shapes. The only thing that you will have to learn that is theory-based are these two things:

Understanding the notes of the low E string will help you transpose (switch keys) using your capo. If a song is in the key of A, you can put your capo on the second fret and play the same open G-Chord, but now you're playing an A major chord.

No matter where you put the capo on the guitar, you can play the open G chord, and the bass note will be the tonic (first note in a scale) and the key signature.

This trick will obviously not work if you don't know the names of the notes up the fret on the Low E, so you must study the fretboard and get these memorized.

The Nashville Numbers system is a simple way to call out scale degrees in any given key.

Most popular songs use the Major Scale and are made up of Major, Minor, and Diminished chords that make up the major scale. However, when playing in different keys, it can get confusing to remember exact chord and note names.

So the Nashville Number's system simply gives each scale degree a number.

So, for example, in standard G tuning, the chords would be:

All these chords (besides the diminished) will be the basic chords you first learn when starting guitar.

Now you can associate a number with each chord, so instead of saying a song uses the chords G Major, C Major, and D Major, you can say play 1, 4, and 5 chords.

Now, if you want to play a song in A Major, you can add the guitar capo to the second fret and play the 1, 4, and 5 chords the same way as you would in G Major, but you'll be playing in the key of A.

This transposition trick will only work if your tonic note is on the low E string.

What About Minor Keys?

Some players may wonder if this guitar capo trick will work for the relative minor key.

The answer is yes!

Playing in a minor key is as simple as starting on the E Minor shape as your 1 chord and then counting up from there. The only thing shifting for the minor keys is that the 6 becomes the 1.

A partial capo only presses down the A, D, and G string of the fret you place it on. The most common fret to put it on is the second, where your tonic chord would be the D-shaped chord.

When you put the capo on the second fret, you create an Esus chord that also mimics the open tuning DADGAD (except with the partial capo, it is EBEABE). 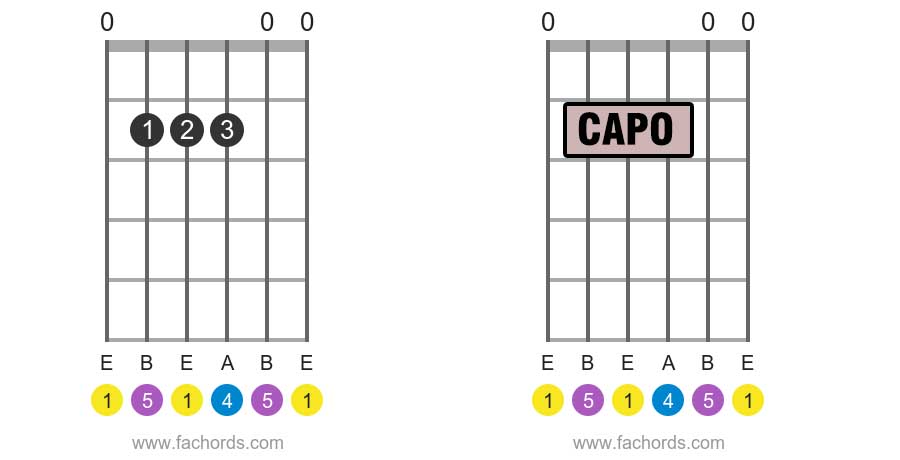 What's great about this tuning created by the partial capo is that all of your standard chord shapes will still sound great. However, because of the droning High and Low E and B strings, you naturally and quickly open up compound chords and inversions without changing your chord shapes.

These inversions and extensions often sound soft, dreamy, and beautiful and can be highly inspiring for creativity.

Another massive bonus for putting partial capos on the second fret is you can play the 1, 4, and 5 chords by only pressing down on one string.

This can be an excellent way for beginners to develop their strumming hand without having to focus hard on what their fretting hand is doing.

Suppose you want to take this concept further and explore sounds beyond what you will get in standard tuning (without learning any new chord patterns). In that case, you can put a standard capo two frets behind the partial capo anywhere on the guitar's neck.

This will allow you to switch keys without switching finger positions or learning new scale patterns.

This tip only scratches the surface of what a partial capo can do. As you grow in your understanding of music theory, a partial capo will open up a new world of guitar playing without having to do all those crazy finger stretches.

The takeaway from this blog post is that the capo can be a powerful tool for applying the musical side of theory quickly, making you a more confident guitar player.

By understanding how to use the capo, you'll be able to transpose chords and scales into any key signature, making playing with other musicians much easier.

Also, partial capos can open you up to a new world of sounds without having to go into alternative tunings or learn advanced chord shapes.

I hope you've found these tips helpful and given you some ideas for further exploring and strengthening your understanding of music theory.

Brad Johnson is a musician and producer from Southern California. When he isn’t spending time with his wife and kids at the beach, he is helping songwriters and musicians at Song Production Pros.
Free Download: Improve Your Chords, Scales and Theory Skills

Learn 7 tips that will help you play bar chords on the guitar. This tutorial will show you all the tricks you need to master bar chords..

Learn the I IV V three chords progressions in all music keys, the foundation of many popular guitar songs.