In this tutorial, we're going to learn string bending . Bending is a guitar technique that gives expression and feeling to your sound, but you should learn it the right way; without proper string bending your phrasing will sound downright awful. So let's get started!

One of the foundations of many modern genres is the concept of blue notes. Notes that are slightly different than standard pitch; most often lowered 3rd, 5th, and 7th scale degrees . These blue notes were better at matching the call and response , or the vocals of blues.

First banjos and later guitars were great at emulating these vocals because you could bend the notes . A piano or keyboard requires a trick to sort of mimic the process, but string bending gives us an awesome and expressive sound!

Normally to increase the pitch of our guitar we move up the frets. Each semitone rise will take us up the chromatic scale . But when you bend a guitar string perpendicular, it also increases the pitch. Depending on the string material and amount of bend will determine how much that pitch rises.

Again the purpose of this is to capture that vocal expressivity already present in the human voice. It is techniques like this that will make your guitar sing, scream, and wail. If you are able to do vibrato with your voice, this is similar to what we want our guitar to accomplish. This technique will give us a better melodic sense and especially improve solos, turnarounds, and the like.

The only downside is this amazing sound can quickly go bad when done wrong. Like most guitar techniques it is pretty simple, yet it requires proper practice to do it right!

The tab above shows you different bending extensions. In guitar tabs, bends are denoted with an arrow pointing up. The numbers near the arrow tell you how much to pull strings:

Depending on the note you are going for, will determine how much you bend.

A very slight movement will only cause microtonal differences. This is something that a piano player can't do . On the guitar, you can bend a string to raise the pitch by half semitone, obtaining for example a note that lies somewhere between a Eb and a E. Applied to the Blue note, This kind of bending is very expressive and it's one of trademark of Blues guitar .

Generally our bends consist of a semitone or a whole tone. Try this half-step bending (E to F):

A whole tone bending occurs when you raise the pitch by one tone, for example from C to D.

In some cases with the right gauge of strings we can get a note and half bend of 3 semitones! Gilmour plays a 3 semitone bend in the solo for " Another Brick in the Wall ".

Of course it is practice that will help you hit these right notes. It's not like just putting your finger on the fret, you have to get the right amount of pressure to increase the pitch the correct amount. And string material really makes a big difference, there are many forums and opinions on the best strings for bending .

Below are some string bending exercises to strengthen your fingers and get you practicing hitting the right note in the bend.

This first bending exercise helps you check if you're pulling strings in tuning.

First, you play a note, and then you play the same note by bending a lower fret . Pay attention to the pitches, they must be equal , otherwise you'll sound out-of-tune.

Try different kinds of bending: fast, slow, aggressive, sweet , enjoy the feelings. The goal here is to become fully aware of how bending impact your sound. Try to bend with your middle finger, then your ring finger, and lastly with the pinkie. Always use support fingers. 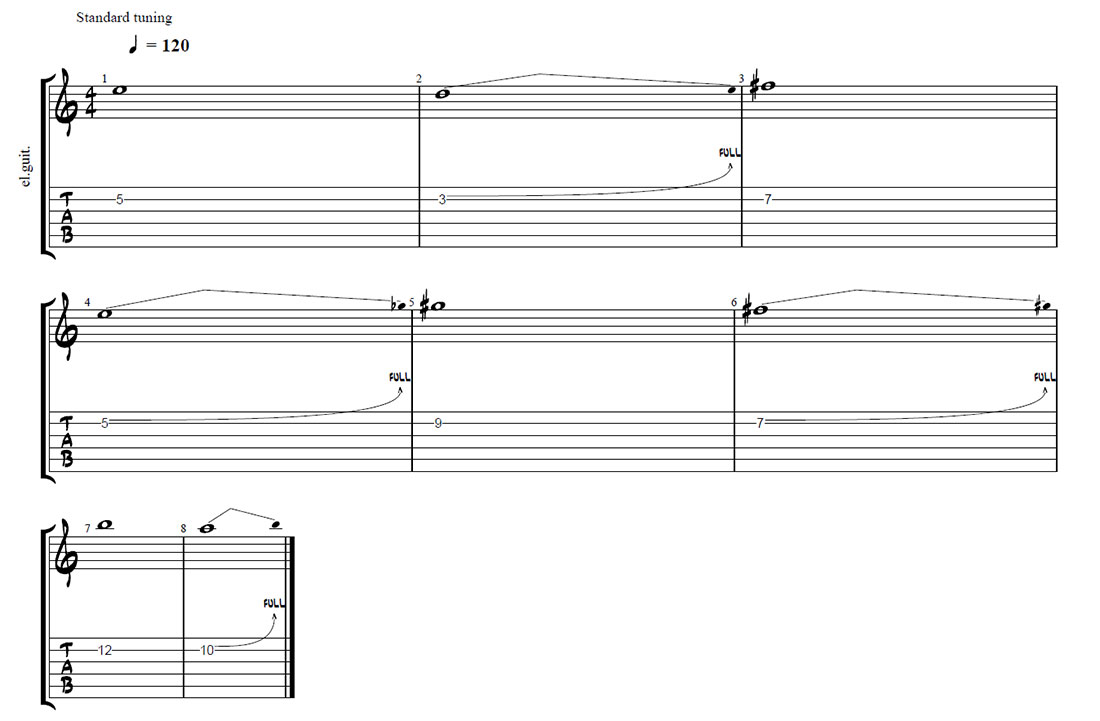 This exercise is similar to the previous one, but mixes half-steps and whole-steps bending . Practice this exercise an all the strings and along all the fretboard, bending strings with your middle, ring and pinkie fingers.

This is an advanced one, but it's one of my favorite bending exercises, it's really fun and rewarding. Credits to the guitar god Guthrie Govan:

Here's a comical-sounding exercise I sometimes try out on students who need to work on their bending. Try taking a scale or melody you already know and moving the entire fingering down a fret. In order to make the lick sound like it's still in the original key, you now have to bend every note up by one semitone, and the results have an entertainingly drunken quality about them. Playing like this always reminds me of Marty Friedman's phrasing when he's going for that Oriental vibe, and you might have heard Richie Kotzen using similar ideas. - from Creative Guitar 1, by Guthrie Govan .

Bending notes is most commonly used in lead guitar riffs and solos . You will find the most notable players among the best blues and rock artists out there. To really understand what is a masterful bending, listen to guitarists like Gary Moore , Jeff Beck , David Gilmour , Steve Vai and many more.

And some guitar players like Stevie Ray Vaughan and Peter Green are known for using heavy gauge strings in successful bending. And of course B.B. King is a legend for using bending and vibrato in the blues, many other rock players copied his style.

Some guitarists even wanted to bend notes and strings that would require extra hands! To accomplish this the B Bender guitar was invented, which sounds amazing and now we all want one ah ah!

Even though the bend is a simple process it takes time to master, and there are many different methods to deal with. Bending and releasing is doing the bend backwards (lowering the pitch) and a silent release is simply not letting it resolve. There are so many ways to express the process. Including subtle microtonal changes.

And just as our voice is capable of vibrato , so is our guitar bend. To do it we bend up like normal, but don't quite drop all the way back. Instead we quickly move our fingers up and down in the little space we bent the string into. This way it creates that wavy vibrato effect. It will take plenty of practice before it sounds right.

Bending strings will lead to breaks! It even happens to those who know the technique inside and out. And depending on your guitar and string material bending will have slightly different approaches and outcomes.

Electric guitars are clearly the best for string bending, especially when plugged into overdrives, reverbs, and delays you can have a loud and lasting bend. Plus electric guitars have lower gauge strings allowing for easier movement. Bending guitar strings on an electric will allow for the most expressive playing.

Acoustic guitars generally have larger gauge strings and without amplification our bend time is limited. A semitone is about as far as you can go on most acoustic string bends. You can try lowering your string gauge and strengthening your fingers if you want to attempt more.

As far as how to bend nylon guitar strings? Well it's a lot harder. Nylon is not as elastic as steel so it takes more bend to change the note. Bending notes isn't a huge part of the classical repertoire! In most cases it just isn't going to sound right.

Guitar string bending is not always needed but when the time comes you want to be sure you can bend into the correct note. Just as you would if you were singing it with your own voice!

Be stay updated on new tutorials, and to get some free ebooks, be sure to subscribe here