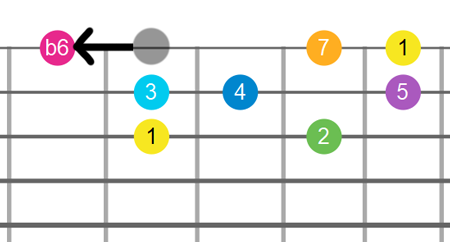 The harmonic major scale is not that popular in modern music, but it has a very easy formula, so it is great for even beginner guitar players. The only downside is that you will not be playing it much.

However, while it may be rare, there are certain times when it just fits the mood perfectly.

In this article we will look at how the harmonic major is formed and some modern pieces that incorporate this sequence of notes.

What is the Harmonic Major Scale?

So the C harmonic major is C D E F G Ab B, it is that simple! The flat sixth is the most important aspect of this scale.

But that minor change creates a huge difference in sound. Try playing the major scale and then the harmonic. The harmonic major has a more dissonant sound and perhaps even a dreamy quality. Which makes sense as it is also known as the 5th mode of the Lydian Diminished scale, and Lydian scales can have a dreamy vibe.

It is also possible to create other modes of the harmonic major scale by starting on a new scale degree. This is not as complicated as it sounds, we just start the same scale in a new position.

And of course these new modes will give us different musical intervals and thus unique tones and feelings.

Don't worry if you do not understand all these routes to getting the harmonic major scale, as always music theory has multiple ways to approach scales and chords.

The most important factor is to remember you are simply making that 6th degree of the scale flat, which changes the entire sound quality. We have a mix of minor feelings, but with the major still very present.

This is a 3 notes per string pattern, it requires a little bit of stretch:

And here you find two options for playing the Harmonic Major scale with root on the 5th and 4th strings (A and G).

The examples provided here are in the key of C. Please remember that scale patterns are shiftable, you can move them up or down the neck to play the scale with another root note.

As with many scales that are not quite major or minor, the harmonic major is often used briefly over specific parts of a song. As mentioned there is a dissonant quality to the b6, which is why you do not see this scale that often.

If it is not applied right or overused most listeners will likely not care for it.

Chords From The Harmonic Major Scale

If we build our chords based on the scale formula above that b6 will give us some unique ones to play with the harmonic major scale. In the key of C we can get a simple tonic chord like a C major 7th, but then more complicated chords will soon pop up, like the Ab augmented chord on the 6th degree, or the F m(maj7) on the 4th.

Rarely are these chords used in progressions all by themselves, usually they are peppered in with regular major and minor chord progressions. If you are a jazz player and you see one of these chords in a song, there is a possible chance that the harmonic major will be a good fit.

However it requires experimentation as the b6 can sometimes sound perfect, other times not so much.

The most common one used in jazz will usually be the V7b9 as we see that often in our improvisation. Some of the other diminished chords do not sound great at all and will need to be tested as to how they will fit.

If your guitar style is a form of experimental jazz, fusion, or metal then the harmonic major scales and associated chords may be great for melodies and compositions. If you play more rock and pop, you will focus more on the times when the iv shows up.

When you encounter a standard jazz progression 2-5-1 in which the 2 is a m7/b5 chord (instead of the common m7), it's likely that it's built on the Harmonic Major scale. For example, in the key of C, you would have: D m7/b5, G7 and Cmaj7

Remember that the harmonic major scale is often present in small pieces in songs, near modal changes or for brief harmonic effect. The popular steel guitar instrumental "Sleepwalk" briefly uses it over the iv (Fm) chord in the key of C. To be clear this is just an instance of borrowing the b6, too much would be overkill.

Other songs that use a similar progression are "Dream a Little Dream of Me", "Blackbird" and even "Jingle Bell Rock". Each song briefly uses the b6 while in a major key, technically giving us a form of harmonic major. Those are usually the best examples of harmonic major, technicalities! Ha!

It is also briefly used in "I Saw Her Standing There" when they use a iv in a I-IV-V chord progression. The Beatles also use passing harmonic major chords in songs like "Across the Universe", "Nowhere Man", "I Want to Tell You", and many other songs.

Pop artists love to lightly sprinkle it in on occasion, for those searching for music theory to argue about it!

In jazz it is briefly used at the start of "Night and Day" and the end of "Stella By Starlight". A better example of a song that uses it more is the prog guitarist John Petrucci with "Terminal Velocity".

Generally progressive or fusion genres are where you will see longer uses of it. But it simply doesn't sound good enough to be used that often.

The harmonic major scale is rare to see, and the examples that you find will be short and sometimes up for debate. It is simply another scale tool to use on occasions when it will fit, which you will only know if you experiment!

Generally when you want a minor feel in a major chord progression the harmonic major may be an interesting place to move. It may or may not work, let your ears be the guide.

That's all for today, please subscribe here to stay updated