Author for this post : Cody, the founder of Musician Tuts , a free tutorial hub for musicians. He has over 10 years experience playing guitar, drums, bass and audio engineering. He spends his days blogging, listening to Spotify, and playing music.

Having a poorly intonated guitar can be enough to drive a guitarist crazy. Picture this, you tune up your guitar perfectly, to the exact cent. You then play a G chord and everything sounds great, but when you start playing a solo on the 10th fret of the B string, it sounds out of tune.

That's a telltale sign of a poorly intonated guitar. In this post, I'm going to cover everything you need to know about your electric guitar's intonation but most importantly tell you how to check it and how to fix it.

The term "guitar intonation" is used to describe the state of how well your guitar's notes stay in tune across the fretboard. In other words, if you turn on your guitar tuner, tune your B string to the perfect pitch and then start ascending the fretboard on the B string, each note, in theory, should still be in perfect pitch. There are different levels of severeness when it comes to good/bad guitar intonation, however, if you're still not sure about whether or not intonation is the problem with your guitar, check out the section below to see which category your guitar fits into.

If any of the points under "Bad Intonation" in the section above sound like your case, then it's time to fix your guitar's intonation.

There are a number culprits that can potentially cause bad intonation. A few reasons include:

If any of the notes played at the 12th fret are sharp or flat then it's time to make a guitar intonation adjustment.

You won't need much for tools to adjust your electric guitar's intonation. However, the tools that you will require might vary slightly depending on the style of guitar/type of bridge you have. In general, you'll need:

Now, to fix your guitar's intonation there will be one of two things you'll need to do:

Let's go over the first scenario to start off. If the tuning of the 12th fretted string is sharper than the tuning of your 12th fret harmonic, that means that the bridge saddle needs to move back (away from the pickups), thus making the string slightly longer. 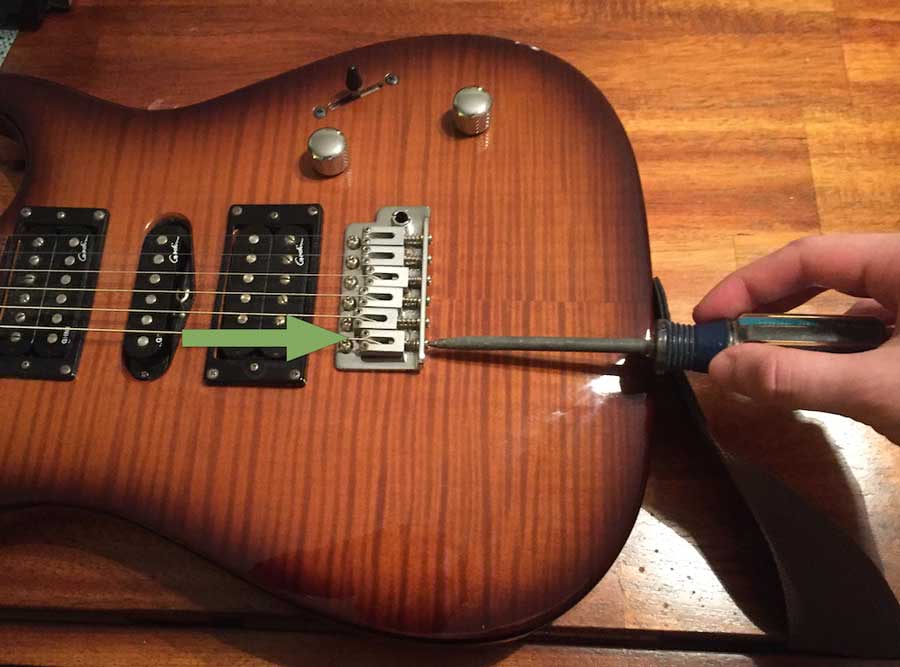 On the other hand, if the 12th fretted string is flatter than the perfect pitch of the 12th fret harmonic string, this means that the bridge saddle needs to move forward (closer to the pickups), making the string slightly shorter. 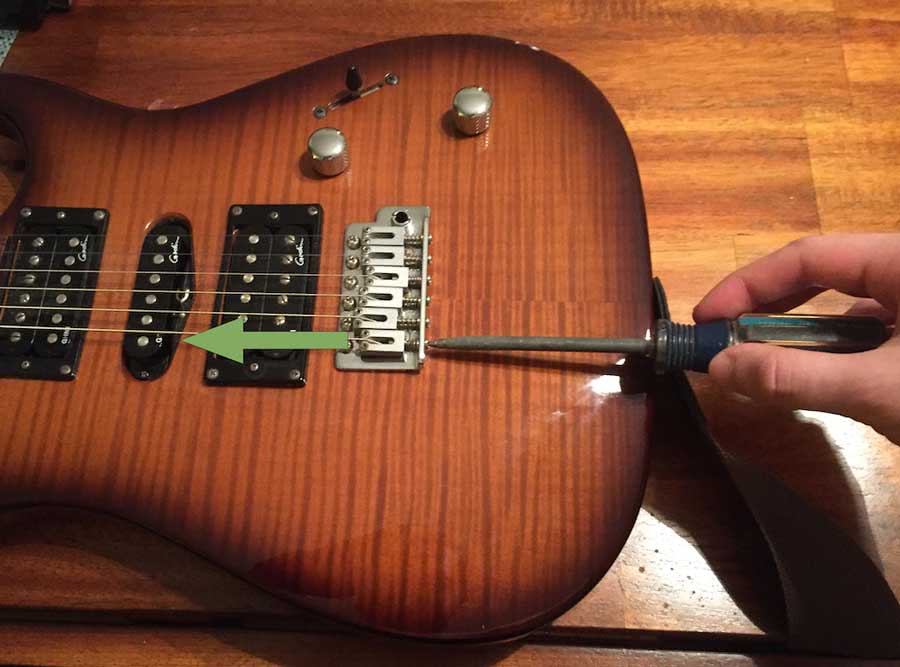 Then, retune the string back to its perfect pitch. When the intonation is set properly you should not see any different in the position of the tuner needle between playing the 12th fretted string and the open 12th harmonic. Rinse and repeat the same process for all of your guitar strings until the intonation is perfect.

Important note: when tuning your guitar and testing the intonation, make sure that you hold your guitar in an upright position (the same position you would play it in) as gravity can have a slight effect on the tuning.

A guitar with bad intonation can be extremely annoying. Nothing is more frustrating than playing a note that you know should sound right but just sounds off. Performing proper guitar intonation adjustments is pretty straightforward and easy to do. If you still aren't comfortable with adjusting your guitar's intonation yourself, bring it into a local guitar shop and ask the guitar technician to check the intonation for you. Most should be able to get this done in a couple of days and have your guitar sounding just like new.