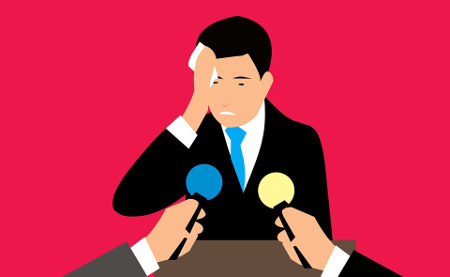 If you ever played in front of a crowd you must have experienced at least once some sort of stage fright .

It's absolutely normal if you are a beginner at his first live performance, it's not a weakness but a temporary state of anxiety.

The age doesn't really matter, as a fact stage fright is mostly common in people that tend to overthink what they are doing, as a result very difficult to find in reckless people that would definitely end up the show jumping off the stage.

So stage fright is basically anxiety of a live performance that can conduct in most cases to fear even the easiest action to perform in front of even few people.

But what do you exactly fear? Sticking with the fact that you do not suffer from any medical condition that can possibly be triggered by such emotional distress, you will be anxious about judgment coming from other people present in the crowd or if you're playing live in a venue it's not to underestimate the presence of other musicians.

Now it's time to go deeper and be more analytic about the particular position of guitarists in this sort of things.

Guitar player's hands don't move by themselves, to state the obvious, fingers are moved by your muscles and (not to scare you) the first victim of a stage fright attack are muscles indeed, so technically it can literally stop your fingers from moving, making you losing rhythm and synchronization with the bandmates.

It's not an uncommon condition, so if you suffer of it don't feel ashamed it's absolutely normal and justifiable.

The natural question is now: Why stage fright happens ? It's the most legit question at this point, to get over a problem the first focus is what does trigger it.

As a player we can identify two major causes:

Let's be honest, in our career we all did once a gig where we didn't have a clear idea what was going on because we missed a couple of hours playing our own stuff rather than the boring songs to go on stage .

Most expert players would know that to get away with it you must have a solid base of improvisation and a fair advanced ear training to overcome the singular challenge of improvising in front of a crowd on the spot.

But if you're a beginner and that's your first gig ever, this can be almost an impossible wall to climb and overcome.

When you're not prepared enough to play a piece of music your brain will start building up a fake confidence , a shield against the anxiety that it's just about to manifest, because at the venue, when everybody will turn up you'll realize that at end you didn't dedicate enough time to study the setlist.

This is one of the most common stage fright situation that will break apart even those song that you might know by memory because it's not how powerful one song can sound your brain does perceive and process the overall knowledge of what's going to happen.

Always remember that our brain works faster than a computer, you might not realize it in the current moment but it is always a few steps ahead to predict the possible outcome of a situation.

So while you'll be naturally thinking “I still do a couple of mistakes here and there, but the third tune sounds awesome though” you can tell in a very straight forward way that you're already building up stage fright.

Of course, when all of this happens you're not even close to the stage.

On the other hand, the band (if you play in a band of course) can be a double-edged sword .

If the group makes you feel stronger in some sort of circumstances bandmates aren't always the most supportive or understanding people.

As a beginner never underestimate the power of opening up with the band about your concerns on the upcoming show, otherwise they will charge you will the expectation of a brilliant and comfortable performance.

The second major cause of stage fright is to perform with people that expect too much from an individual or won't let you express as a musician or the worst-case scenario, they are a well bond band and you're the new entry and you know that they usually change cards on the table while playing.

If you are in any of this cases it won't really matter how advanced is your knowledge or preparation, you just won't feel comfortable to play and so you'll experience stage fright and this is possibly the worst form because most of the times it manifests right there on stage.

How To Get Over Stage Fright

To get over them is definitely not easy at all, even if you will come prepared and well in bond with your band there is no guarantee that you won't feel anxiety at all!

Here there are some suggestions that can help you get over your stage fright.

Breathing is the most important thing ever , don't let your heart to accelerate or you'll start sweating and panicking, so said take deep breaths and mentally go over your parts to play, slow down your heart beating by breathing slower and you'll feel much more relaxed and ready to portrait a good performance.

Now to state the obvious, of course, study your music, don't leave things at the last minute or even with this suggestion you will be more scare than ever to be on stage.

Visualization is a powerful technique that can help you live situations that will happen in the future. Visualize yourself playing with confidence in front of your audience. Focus on your music instead of fear of judgment. Some days before your performance, sit down in a quiet spot and imagine yourself during the gig: you play well, you and your audience have fun, there is no space for fear, just the joy of making music together. This technique can make miracles, even with basketball !

Start playing as soon as you get at the venue, warm yourself up , it will stretch your muscles and make you feel ready to play straight away, don't over do it , just warm-up before the performance for as long as you think it's necessary.

Eating a small amount of sugar that could be a small square of chocolate will help your brain releasing dopamine in order to calm you down.

If on stage you're still in panic don't worry, the most useful suggestion, in this case, is : let the music flow , even you miss a part don't worry, wait a couple of bars, nobody in the crowd will notice you did a mistake, they are there mostly for the show , not to judge you.

Feel the mood of the song and enjoy the moment, whatever the level of expectation is, the more you'll think about making a good impression the more likely you'll be to make a mistake.

Be confident of your playing and don't compare yourself to other musicians in the crowd , for sure they might suffer from the same stage fright as you do!

In conclusion a quick recap of good rules and tips:

What about you? Have you ever found yourself in a stage fear situation ? What happened? Drop a line in the comments below!