This generation is playing guitar differently than the one before. Computers are replacing guitar amps with software in place of pedals. Gig bags are getting lighter. Guitar learning software helps learn faster. It is fair to credit IK Multimedia Amplitube with all of this.

IK's AmpliTube is utterly essential to any electric guitar player's toolkit. Using one of IK's dongles to take input from your guitar directly into the computer via USB, AmpliTube emulates a full-featured amp and microphone setup with a complete pedal chain and a number of handy add-ons. And the sound quality is fantastic. With the right speakers, those amps sound like the real thing . The pedals, too, are less emulations than facsimiles – the Chorus is clean, the Overdrive is crunchy, and any psych-rock sound can be teased out of a Delay-Flanger-Tremolo combination. The pedals are easy to control, and the interface makes it easy to mute one or swap it out with a click. 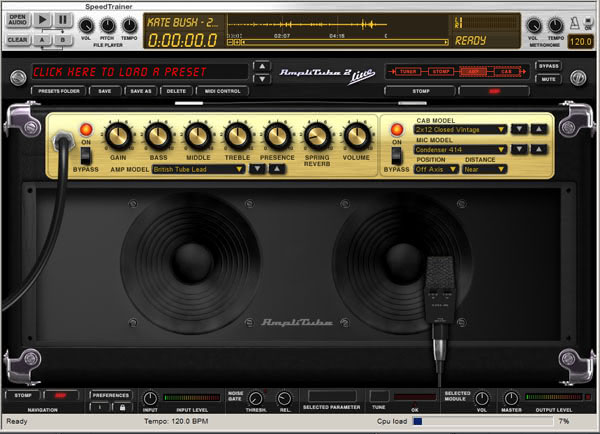 Signal processing aside, AmpliTube's real value comes in its Speed Trainer . If you're trying to learn a tricky solo or even just training your hands to play a riff, there's no better way, period. Load in a song file from your collection, and AmpliTube lets you play over it, adjusting the song's speed as needed , gradually inching it up as you get better at the piece.

What's even handier is the ability to set a loop range on the song, so instead of rewinding it manually each time, you can keep your hands on the guitar, never breaking your groove. If you're sitting in front of the computer with a guitar on you, the benefits of automating the rewind on a 20-second-long solo are staggering. Speed Trainer facilitates the most efficient guitar practising experience available. (another useful software to slow down music is Riffmaster Pro )

While it might not be clear what version of AmpliTube is right for your home studio , you certainly can't fault IK Multimedia for their lack of options. Aside from the standard AmpliTube 3 package, they've got a variety of different flavors, from Metal to Fender ® to Jimi Hendrix . If you can't still choose, there's also AmpliTube Custom Shop, which is free but encourages the purchase of individual pedals, allowing you to cobble together your own personalized setup . Whatever your balance of needs, funds and time, AmpliTube seems to have an option for everybody.

In case your computer isn't portable enough to bring to a gig, there's AmpliTube iOS . The basic program is free , and comes packaged with the iRig dongle which allows input through the iPhone, iPad or iPod Touch's headphone jack. AmpliTube iOS works on the same principle as the Custom Shop, providing a bare-bones setup with the option to easily purchase and download more pedals. While it takes a bit of money to outfit your iPod exactly like your computer, the results are the same. You can take your guitar anywhere and produce the exact sound you want.

That said, AmpliTube has always been glitchy. The program frequently crashes upon opening (both Windows and iOS versions), sometimes crashes while playing or switching pedals, and the sound has a tendency to stutter when the processor is over-taxed. While these problems are only minor inconveniences in a home practice setting, they could be fatal in the middle of a gig .

Overall, AmpliTube in all its forms is an astonishingly good piece of software , especially for the price. Compared to the hardware it replaces, it'll easily save you hundreds of dollars . However, if you're a compulsive spender, AmpliTube could be a dangerous thing for you. The range of pedals available, and each one so cheap, can only be described as 'tantalizing.' But that's between you and your budget. 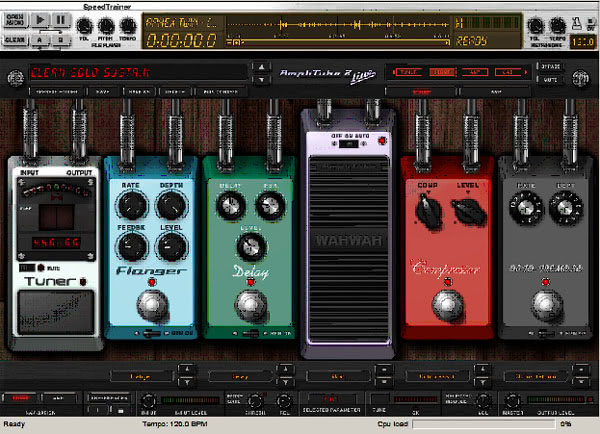 Here we analyze Riffmaster Pro, a popular slow downer app. Slowing down music is a great way to develop your musical skills (and spot wrong tabs!). .

Cubase is a popular DAW that provides you all the advanced tools you need to record multi-track audio and MIDI, edit, mix and master your music..

Transcribe is a software designed to assist musicians for transcribing music; in this post you’ll discover its main features and benefits.

Introducing Chordpulse, an easy to use backing tracks software. It allows you create chord progressions and complete songs in different styles and tempos. .

Audacity is one of the best free audio recording software. If you want to record your guitar, this software is what you need. Let’s see how it works.

Guitar Pro is a guitar tablature software that helps learn songs through guitar tabs. Here we’re going to learn about the main benefits of this tool.

Guitar Learning Interactive Software | Easy and free to use