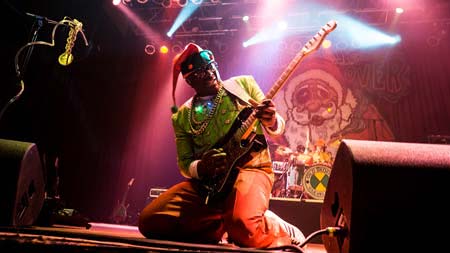 The winter solstice is celebrated by many cultures the world over, however the western culture has much of the market cornered with Christmas . Every year it seems to start a little bit earlier, which may be a great thing, or not, depending on who you are! Around this time of year, it is impossible to deny that the music of Christmas is a very big deal. While traditional songs are common favorites most listeners love the original tunes from the early days of rock and roll. There are many holiday songs that are perfect for either the electric or acoustic guitar, with great riffs and chord progressions. In fact, even if you are not a huge fan of Christmas music, it is always good to know how to play it. Especially if you like to entertain an audience , holiday songs will make folks happy!

This is a song that should show up more often on lists of great guitar intros, the beginning riff is an iconic part of rock and roll. Bobby Helms made "Jingle Bell Rock" popular during the rockabilly era in 1957. The intro has that wonderful clean electric guitar sound so reminiscent of that time period. This is one of those songs that nearly everyone seems to like, it gives a listener instant holiday cheer. The intro and chord progression may be a little more suited to intermediate players, but is manageable with a little practice. A simpler version of the song can always be played with these chords.

If you notice that "Jingle Bell Rock" and "Rockin' Around the Christmas Tree" sound familiar that is because Hank "Sugarfoot" Garland played guitar on both songs. His guitar definitely has the signature rockabilly sound of the era. The singer Brenda Lee was only 13 years old when this song was recorded! This tune will be a little difficult to play for the beginner. It will take time to learn the most common way to play it, or we can start with a simpler version. It is definitely a song that will always get toes tapping after the intro guitar lick.

The heyday of Christmas music was clearly during the early rock and roll and rockabilly era. Elvis recorded many holiday tunes, but "Blue Christmas" will always be his most popular. This song can be a little challenging for a new guitar student because it has the dreaded B7 (at least when played in the Key of E), but it's a necessary chord to learn.

As a guitarist you never need to look much further than Chuck Berry for some great riffs and licks. "Run Rudolph Run" is another 12 bar blues song similar to Johnny B Goode, and just the same a very popular song. As we all know, this song is often a staple of holiday movies! Not only is this a great holiday rockin' tune it also is a good example of a variety of guitar techniques. The repeated riffs use lots of slurs, bends, hammer ons, pull offs, and plenty of pinky use! Pinky practice is important!

Gene Autry, the singing cowboy, had a number of popular Christmas hits, one of the best being "Here Comes Santa Claus". The song is a great example of early country and blues as it was transitioning more into rock and roll. It's not to hard to strum this song on the guitar and an audience favorite for both adults and children. The chord progression moves a little fast at times, but with practice gets easier. The chorus chord progression also makes a great intro, especially if you play the last three chords slowly (Dm7 G7 and C) before segueing into the song. Like this song the other Autry tunes of "Rudolph the Red-Nosed Reindeer" and "Snowman" are perfect ditties for an acoustic guitar.

This Christmas tune dates all the way back to the mid 30's and has been covered by many artists. It has a great chord progression with plenty of 7ths and can be interpreted in a variety of ways. Of course it makes a great acoustic sing along song, your audience will definitely join you in singing. The chords are not to difficult and for the most part are fine for beginners.

While the popular version of this song isn't exactly associated with the guitar, it nonetheless makes a great acoustic guitar piece. It is often very popular among female guitar students. The verse of the song is a simple doo wop progression , nothing too difficult. It is the kind of easy guitar piece that really allows great vocals to stand out. That is why the original version of the song is so popular, Eartha Kitt's voice is perfect!

This song is a little outside of the normal rock n roll or country blues we have been playing, it is more of a jazz standard. Technically it has no mention of Christmas, but is still always associated with the holiday season. As is normal with jazz standards, there is a diminished chord in the progression making it a little more challenging for some guitar students .

This tune by Burl Ives was made popular by the 1964 stop motion animation movie Rudolph the Red-Nosed Reindeer. Like many of the other Christmas songs on this list, this song makes use of plenty of 7ths. In fact, you may have noticed by now that a lot of holiday tunes use very similar chords. This song has a great chord progression that utilizes a lot of different chords, it is excellent for beginning and intermediate guitar players.

The huge popularity of this song has always seemed surprising. Yes of course it was written by the super talented John Lennon, it is just that it has an initially depressing start. Perhaps that is why it has endured for so long because it is a counterpart and reality to the excessive joy and happiness usually associated with festive times. It is undoubtedly a Christmas song with a message and most listeners love it. The chord progression for this song is much different than the others so far, that is another reason it stands out from other popular holiday tunes. It is very simple, yet still quite powerful.

There are of course many more Christmas songs out there , some perfect for a guitarist, others more suited for a choir or carolers. There hasn't been much mention of traditional Christmas tunes, yet that doesn't mean they aren't fun to learn on the guitar. It is always good to know chord progressions of easy songs such as " Joy to the World ", " Silent Night ", or even the complicated " God Rest Ye Merry Gentleman ", that way you can always accompany a group of singers if necessary. Some traditional songs are definitely perfect for beginning guitar students who may struggle with 7ths or diminished chords or who aren't the best at reading tabs.

Whether traditional, rockabilly , or simple pop rock it is important to have a few Christmas tunes in your memory. You never know when you may just find yourself in front of audience who will gladly sing along! Especially with fun songs, like my favorite, Grandma Got Run Over By a Reindeer! It is not too hard to play on the guitar, loved by many, and a silly tune to end this list of great Christmas guitar songs!