I like very much the Tosin Abasi's lessons series included in my Jamplay Membership ; so I wanted to write a post about this creative musician. But before we jump into a little biography and piece about him, first have a listen to the song below:

Wow... right? Within one minute of that song, the listener is left flabbergasted by such a great guitar player. There are moments where his speed and rhythm directly copy the drums and it makes for an awesome composition. Hopefully you noticed that Tosin does not play a normal six string guitar , his guitar fretboard is huge and near foreboding for a novice guitarist.

Tosin, whose full name is Oluwatosin Ayoyinka Olumide Abasi , was born to Nigerian immigrants in Washington D.C. Like many guitarists he was self taught, even relying on the popular VHS video tutorials of well known 80's and 90's hair metal musicians. For those who remember those videos, sometimes they were absurd and over the top. The bands Tosin has played in have been labeled " technical metalcore " and " instrumental progressive metal ". This style of music can also go by a variety of names, but its hallmark is a technical mastery of the guitar. Even for those who really aren't fans of heavy metal, it is hard to not be amazed at the skills of such players as Tosin Abasi.

Playing technical metalcore and similar types of music requires 1000s of hours of practice leading to absolute mastery of the guitar fretboard . If you want to play at the speed of great guitarists like Tosin, a metronome is required daily practice. Many hardcore metal players use the metronome so often; they can hear it in their dreams! And as if playing guitar with six strings isn't complicated enough, many technical metal players like Tosin, play seven and eight string guitars ! However, whether you are using a six, seven, or eight string guitar, the key is to practice until your muscle memory is perfect. It takes a special kind of guitar player to build these kinds of skills, nearly being obsessive in practice and goals. In my experience heavy metal guitar soloists have a near religious practice schedule . 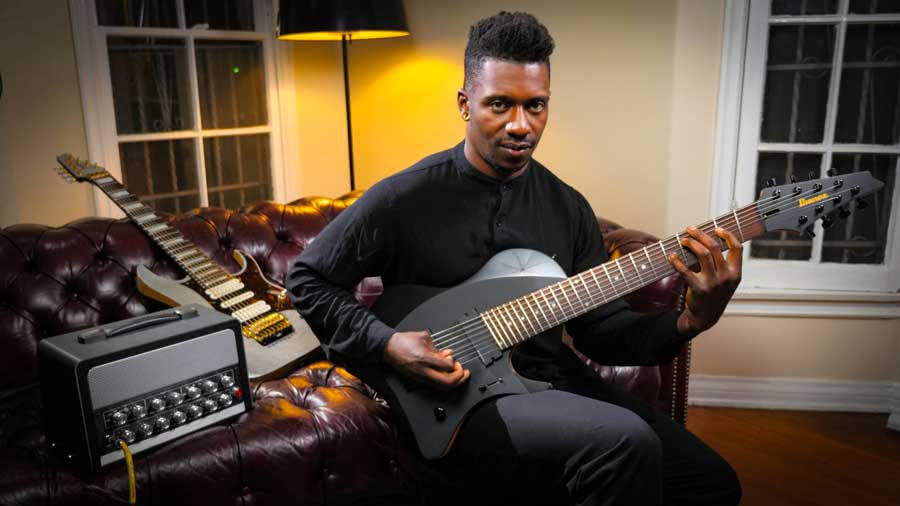 In the mid 2000s Tosin joined the band Reflux , which is your average hardcore metal band. They are definitely the kind of band that has specific listeners, those who like distortion, fast paced music, and lots of screaming and yelling. Ha! Even if hardcore metal is not your cup of tea, if you listen it is still obvious how much Tosin's playing stands out in this song . In fact, try and keep up with his fingers whenever it shows him playing. While playing with the band Reflux, Prosthetic Records took note of his mastery and asked him to make a solo album. This "solo" effort became known as Animals as Leaders , and on the first album nearly all guitar and bass tracks were recorded by Tosin. Since 2009 they have released four studio albums, all prominent on the djent scene . 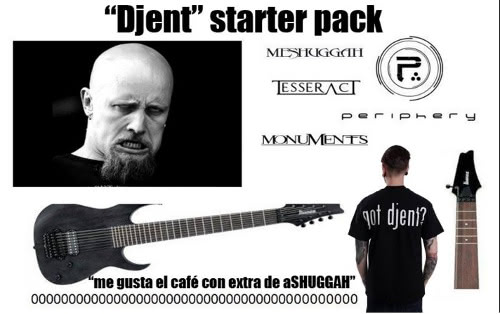 Djent is a style of progressive heavy metal music , known for high gain, distortion, palm muting, and low pitch guitar. The Swedish extreme metal band Meshuggah originated the djent technique, Tosin will often mention Meshuggah as an inspiration. To get an idea on how the djent style sounds here are a list of 10 songs, including the third on the list which is CAFO by Animals as Leaders . As always with musical genres there are plenty of arguments as to what is djent and what isn't, some even claiming that it really doesn't exist. However, Tosin Abasi himself, believes that djent has a list of specific features in progressive heavy metal . Any player that is capable of virtuoso feats of the guitar clearly has the right to claim a genre if they like. (image courtesy of http://djenthub.com)

Playing a guitar scale at breakneck speed is technically amazing, but not all guitarists who do this know how to create harmonic masterpieces. The direction of progressive metal over the years has been one of more complicated layers woven into the music . That is why seven, eight, and even nine string guitars are used, they allow for more interval combinations than the basic six string guitar. Polymeters are also used which allows for the same beat to be used over different measures. This is best shown by Tosin rather than explained here! Even the syncopated riffs take a little explanation in order to wrap your head around them. As you may have noticed in the links above Tosin will often use two handed tapping techniques . Which is as fun to watch as it is to listen to! When you add all these techniques together you get some surprisingly complicated music. I have heard some people jokingly refer to progressive metal as math rock ! And honestly with some of the meter changes and fast speed it really is a fitting description.

One sign that a guitar player has made it, is when they have their own signature guitar created. Ibanez originally created the TAM100 and TAM10 models for Tosin, both eight string guitars. These specialty models are based on the Ibanez RG2228 , the first mass produced eight string guitar in the world. Here Tosin is playing the song " The Woven Web " on the TAM10. These have since been discontinued, but Tosin has another one soon to be released. This new guitar is also an eight string , but a bit smaller than the average eight string. Clearly these custom guitars are meant for someone into progressive metal or even jazz , genres that beg for any added lows or highs and new intervals. 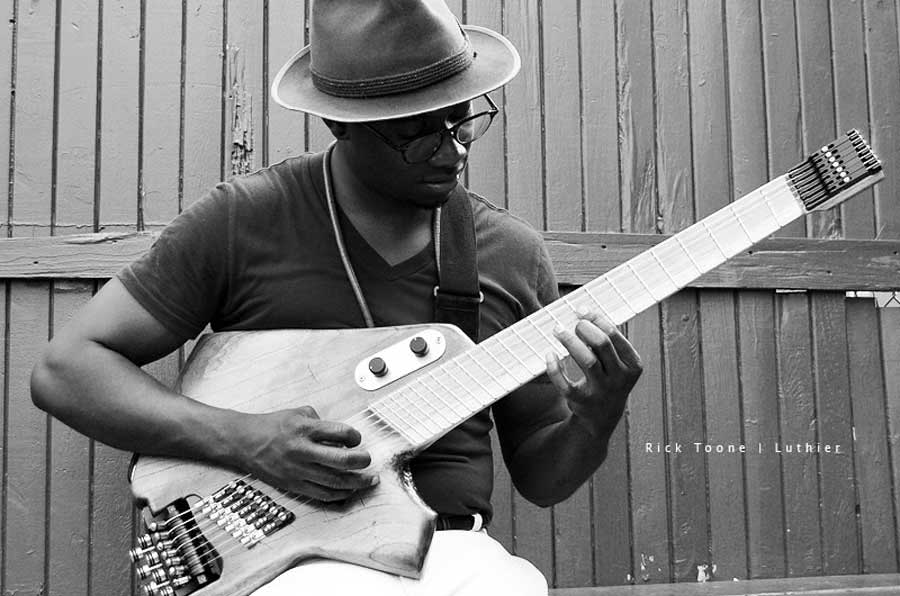 It will be interesting to see what comes next for Tosin Abasi and Animals as Leaders . When it comes to technically brilliant players, the listener will always have something new to look forward to in the future. Players who push the boundaries of their genres and draw from a well of musical variety will also always keep even the critics waiting to hear what comes next. In the meantime if you wish to be inspired to practice more, just watch Tosin play ! Sure it can be a little intimidating, after all he is outstanding, but when you put the work in that he has, you too can be a phenomenal guitarist . If you want to learn more about Tosin Abasi's style and technique, he has released a complete lessons series for Jamplay, check it out at this link . 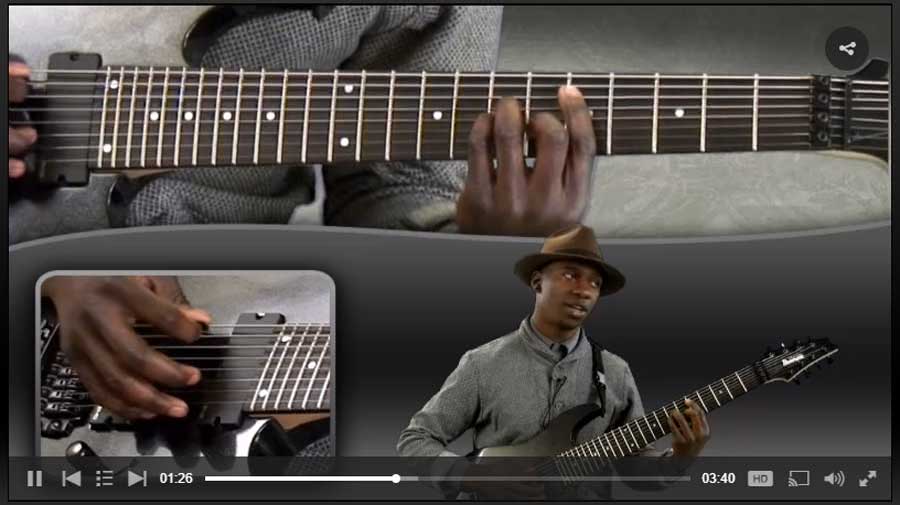