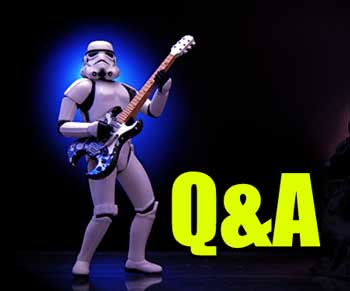 In this small Questions & Answers series we are going to ask 11 guitar experts three questions related to the guitar learning process.

Getting inspiration from different points of view is one of the best ways to get insights and fuel our inspiration, so take advantage of these very interesting answers and try to incorporate them into your practice.

Let's start with the first question. Chord progressions are the foundation of music: we all know the popular rock-blues progression I IV V , or the four-chords sequence used in the most of pop-rock songs ( I V vi IV), but now we'd like to learn some new and unusual progressions. So we asked our guitar teachers:

Question "What is your favorite unusual chords progression?"

This ebook will show you 52 chord progressions, that are the foundation of many genres and styles of Western Music. Why 52?

So many to choose from, so I'll go with what's been on my playlist recently. The opening section of Dave Brubeck's Strange Meadow Lark always leaves me motionless and wide-mouthed with awe, as does anything from Bill Evans. But that's jazz.
More down the mainstream, Killer Queen by Queen is an underrated (if only because of the hype of Bohemian Rhapsody) masterpiece of almost unfathomably meandering modulation.
And I must add It's Not Me by Supergrass (yes, the band that brought us that crudely pop-tastic "Alright") for its unpredictable, albeit structured changes that still sound as fresh today as they did when I was studying for my GCSE's. Incidentally and unashamedly, Supergrass remains one of my favourite rock bands of all time.

E5 - E5/D# - C#5 - B5
E5/D# = X69XXX
There is nothing especially spectacular with that progression, but the use of power chords with a changed bass note is pretty uncommon, even that they are easy to play, and by small means delivers a fresh sound to an otherwise very recognized area of progressions.

Original Star Trek theme . Alexander Courage rocks!
Very much an orchestrated piece with horns and lots of depth. Lots of jazz influence in a style that was prevalent in many of the TV shows during the mid 60's.
Key of Bb at 154 bpm.
My best recollection of the essential chords progression would go something like this:

Of course there's a lot of nuance in the original, but the above transcript gives you the basic idea. The Cmaj7 modulation is nicely dissonant, and the last phrase has a very cool progression built over staggered V's that lead to the penultimate II IV I finale.

I like chords that move in 3rds , as opposed to 4ths in traditional harmony. So chord progressions like Amaj7-Cmaj7-Emaj7 etc. They push me to think outside the normal harmonic norms and explore other options beyond my normal bag of tricks when comping and soloing.

I'm a sucker for short four-chord progressions that stray from the chords strictly inside a key. Songs like Sublime's " Santeria " and Radiohead's "Creep" hit you with a secondary dominant immediately after the tonic chord. Lately, I'm enjoying Otis Redding's " Sittin' on the Dock of the Bay ": G B7 C A7 . It's in the key of G, so B7 is the III or the V of vi. And C is the IV. And A is the II or the V of V. Really subtle and tasty.

Stevie Wonder's version of For Once In My Life is one of the greatest songs ever. The chord progression is as intricate as most of what you'll find in prog rock or fusion, but the song itself is a snappy pop tune that'll still pack a wedding dance floor fifty years after it came out.
(And just as a bonus, you get to hear James Jamerson thrown down one of the most iconic baselines of all time—an improvised romp over that progression that never once repeats itself.)
Can you believe Berry Gordy initially vetoed its release and had to be coerced into letting it see the light of day?

I love progressions that use the "spy chord" like E minor Major 9 . This is usually based on melodic minor scale harmony. I like to arpeggiate it after playing the I chord. Here is an example. Play a ii-V-I then play the I minor Major 9 . Fm7-B7-Emaj7-EmM9 . Play around with different variations. It gives a fun spy feeling.

My favorite is one I came up with on accident for a song I wrote called, "Got To End." It goes from a G#min11 to a G7(#11) and then back to the Bminor. I still can't explain why it works but it sounds great to me and was a great accident.

Hope you found these answers interesting. You should now have new cool chord sequences to experiment with. And of course, please share your favorite unusual chords progressions in the comments below!

The other Questions & Answer of this series: