One of the more troublesome aspects of music theory for many musicians is time signatures. Even if you may have taken some music courses in early education, you likely stuck to basic times like 3/4 and 4/4 time.

In this article we look at what time signatures are and how to read them.

The first step is to take a look at what a beat is, and there are a few terms involving the musical beat. The first is the pulse, which is often another way to describe a beat and what most of us tap our foot to.

The simple human heart beating is what likely led to this musical development. (Yes that is an assumption and not proven, but it makes the most sense!)

To be a pulse or beat there has to be some sort of distinction between each sound. If you play a note too slow, it becomes a drone.

The speed at which the pulse moves is the tempo. Sometimes tempos can be labeled with terms like presto, adagio, moderato and more.

But usually these days a tempo is measured in BPM or Beats Per Minute.

Now when we have a repeating pattern of pulses, this is known as meter. The most common repeating beat meter is four per measure. And a time signature is how we notate what that meter is.

Other important beat terms are groove and rhythm. The rhythm is how the beat pattern and other sections like the bass mix together. And the groove is where we build on that rhythm to find the sweet spot.

That pocket is where the magic happens! And it's not all up to the drummer, the whole band creates it. 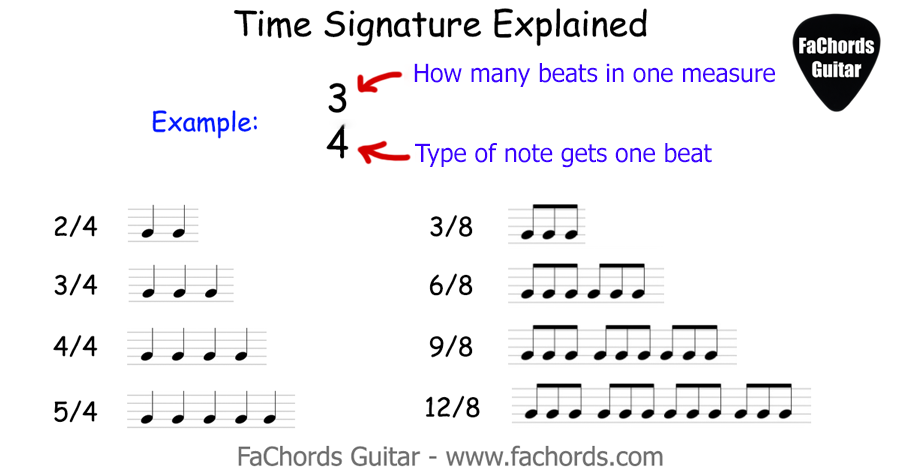 When you first look at a piece of sheet music at the beginning it shows the key and the time signature. If you see a C symbol then that is basic 4/4 time. A C with a slash is cut time or 2/2. If a time change occurs later in a song, it will show the break and the new meter.

That really is how simple it is to read time signatures. The hard part is taking that info and applying to your playing.

For example 12/8 time means we are counting eighth notes and there are 12 in each measure. That's easy, but now you need to learn to properly count and play it.

Simple time is when the top number of the time signature can often be divided by 2 and is counted in one way. Just like people have used their heartbeat to influence music, so have other essential movements.

This is the most common time and most songs you know are in it. The basic counting of 4/4 is four quarter note beats per measure.

Despite this being such a common time we can change it up a little depending on where we accent and stress our beats.

In older music the downbeat or first beat was accented the strongest, and the third is the next.

The bold being where you emphasize or accent the beat.

But along came syncopation and swing and now you often see 4/4 counted:

With that heavy backbeat for rock and dance.

And don't forget that we don't just have to use quarter notes. That is simply the basic beat of the time signature.

Here we have two beats per measure and our basic unit of counting is a half note. It is very similar to 4/4 but because the half note gets the beat instead of a quarter it is twice as fast.

Generally the accent will be on the first beat, unless using modern syncopation. Great song examples include:

Here we have 4/4 time basically cut in half with just two quarter notes per measure. This is also counted 1-2 and is the time most common in marches and polkas.

Again the accents will change the vibe but the 2/4 time generally has a driving march like rhythm.

This is another simple meter measured in quarter notes, but now just 3 per measure (simple isn't always divisible by 2!). Usually the first beat is the accented one:

And if you start clapping that beat with your hands you should immediately recognize a waltz feel. But there are also many modern pop hits that also use it.

As we progress in time signatures you will notice that some are very similar and almost interchangeable at times. Here the beats are not quarter notes but eighth.

And technically speaking 3/8 and 3/4 are pretty much the same. But musically they have subtle differences.

Despite 3/8 and 3/4 having a three on top, they are still simple times, unlike our next kind. Again they are simple because of the one way they are counted.

And a great example of 3/8 is Für Elise.

Compound times are often divisible by 3 and have more than one way to be counted. Times like 6/8 and 9/8 often have a dancing vibe, but more of a high class feel. Like a fancy ball with "proper" dancing. Ha!

Of course 6/8 can be divided by two or three beats and it is counted in eighth notes instead of quarter. It is very similar to 3/4 time.

That fourth is slightly less accented then the 1. This makes a subtle but important difference in 6/8 vs 3/4.

It has two dotted notes so it can be counted both ways.

It's confusing like the 3/8 above but try not to overthink it!

Some great 6/8 examples are:

Here we have 9 eighth notes per measure, or 3 dotted notes since we are dealing with notes divisible by 3. This time isn't as common these days but still occasionally used.

This is where time signatures get frustrating. Like all music theory so many aspects can be expressed differently.

Doo wop is a huge fan of 12/8 along with some other examples like:

Time signatures that don't fit into an easy pattern are called complex, irregular, and asymmetric. We also have additive meters that have multiple numbers at the top! It can all get very confusing fast.

If you really want to dive into some crazy and difficult time signatures, check this page out.

For now we are just going to mention a couple popular odd time signatures. Otherwise you should study the basics before trying to go too far.

And when it comes to counting these tough time signatures, there are often multiple methods.

One of the more common irregular times is 5/4, which by now you should know has 5 quarter notes per measure. This provides a kind of halting feel to the beat.

Here we have 7 quarter notes per measure and another irregular time we see often.

The most popular example is Pink Floyd's Money, but some argue it is in 7/8.

Again time signatures can be heard and counted in various ways.

If you really want to take your studies of time signatures to another level look into a little drumming. It doesn't require a great expense, simple practice pads and sticks.

Or use drum machine hardware and software to look into programming basic times and beats.

Taking up side practice in another musical instrument generally leads to a broader understanding and in many cases enhances creativity.

A little study and practice in different meters and times will later help with your strumming rhythm on the guitar.

And then the next step is to start looking into syncopation. This is how we slightly change our spacing of the beats. By playing it a little off time or accenting the offbeat notes we can give the music some swing.

Swing can be notated in the sheet music, but it isn't an easy thing to learn and physically replicate. It is honestly difficult to teach swing, you just have to feel it!

So for now on when you play a song pay attention to its meter and the beats. Watch videos of how to count different times and challenge yourself when listening to new music.

This tool allows you easily create a jam chords track, visualizing the chord tones on the fretboard. It will help you improve your improvisation chops.

This lesson shows you the most common chord progressions: learn how to play them combined with modulation, borrowed chords and secondary dominants.