In this tutorial we're going to learn some cool strumming patterns for beginners , that you can use to play many songs with your acoustic guitar.

The exact definition of the " strum " is a way of playing a stringed instrument with the finger or plectrum (pick).

This playing can be done in upward , downward , or a mix of strokes . And below we will show you some specific beginner guitar strumming patterns. But it's not always so easy to translate into better playing.

Just because you read the instructions on when to strum up and down, doesn't always mean the playing will sound good.

Teaching someone how to have rhythm is not an easy task. You should listening to your favorite guitar players and try to internalize the beat; with time, practice and patience you'll get there. Tommy Emmanuel is a great example of how strumming can be executed with incredible ability.

One piece of advice to make your strumming abilities advance; learn your chords and chord progressions .

A common pop song is often made up of three chords like G , C , D , and back G. As you practice the guitar strumming patterns below, play them over chord progressions.

This will help you feel like you are playing a song, allowing you to get into the proper rhythm of the strumming.

This article will mostly be covering beginner downstrokes and upstrokes , and they can be played with your pick. Once you master some of the basic patterns you will be able to move into playing with more of a fingerstyle.

The most basic strum is the downstroke, just simply hitting all the strings at once , starting at the top of the note.

Remember a G chord starts on the low top string, but a C starts at the next.

Make sure to start strumming at the bass note of the chord, for a downstroke.

Do not underestimate the downstroke! It is a common feature of punk, metal , and many other styles. It is represented by a downward arrow when reading most guitar strumming patterns.

The upstroke is just the opposite, you start from the bottom high string and pluck upwards.

Unlike the downstroke this isn't often played alone, it's mixed in with other downstrokes.

Now of course every strum will not always go from the very top to the bottom and back.

Like in funk music you only play the top treble strings with the pattern.

Speaking of funk, what makes it funky is sixteenth notes . And rock is often made rockin' with eighth notes .

The point being that learning to strum also means learning how to count notes.

Of course we won't jump right into complicated patterns, but it is necessary to learn to count the beat and to have a metronome. Don't worry about sounding robotic and with no rhythm in the beginning, that will come; first focus on counting and playing the strums at the right time.

Basic Strumming Patterns To Try Out

Make sure your guitar is tuned and pick the best chords you know how to play for the patterns below.

Stick to G,C, and D chords at first as that is easy.

First read the pattern, make sure you understand it and try a dry run.

After you have a good idea, turn the metronome on low and start playing. Each pattern will get a little harder than the last.

For each strumming pattern we show the tabs and you can listen to an audio sample at 50 bpm and 100 bpm .

The first pattern is the simple four beat downstroke. Simply play a downstroke on each beat of the measure. Keep increasing your speed as you play.

Now a simple eighth note down, up, down, up pattern this time putting the upstrokes on the ‘and' of the beat. By removing various upstrokes and downstrokes in this example, we will get a variety of rock guitar strumming patterns. 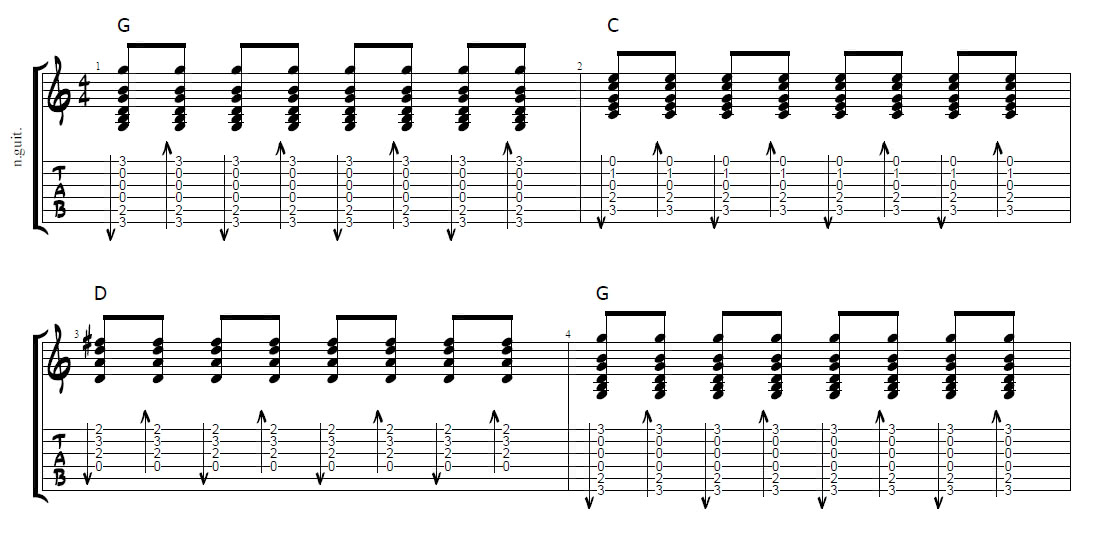 The next pattern may seem like jumping ahead too fast, but it is important to know how to count sixteenth notes. It's counted one-ee-and-ah-two-ee-and-a… so on. 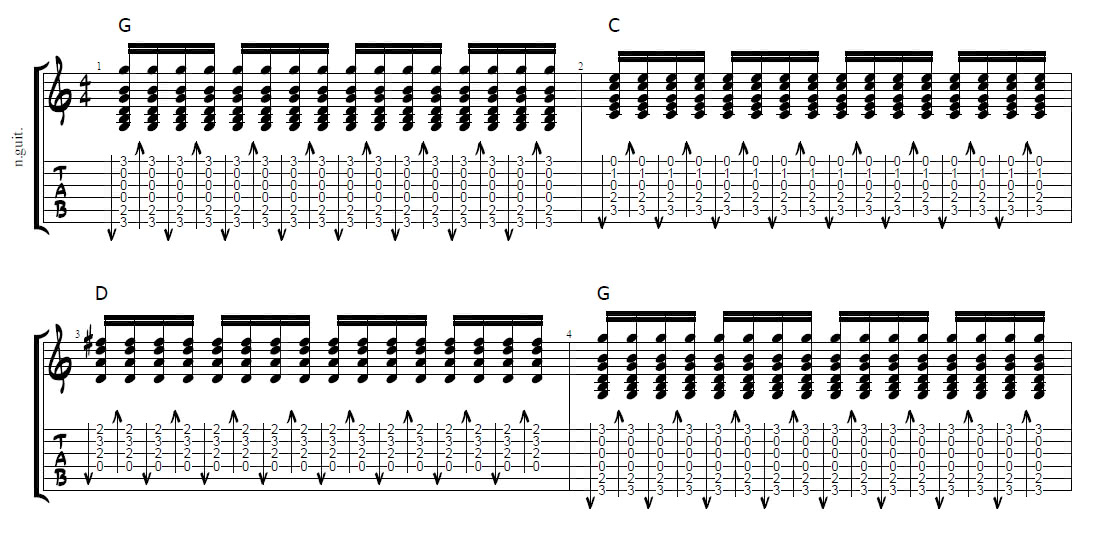 You have had it easy so far just strumming down and up, but now for a little harder strum. When you strum downwards on the beat only play the low bass string. And then strum all the strings on the next downstroke and upstroke, this is a common strum in country and folk. 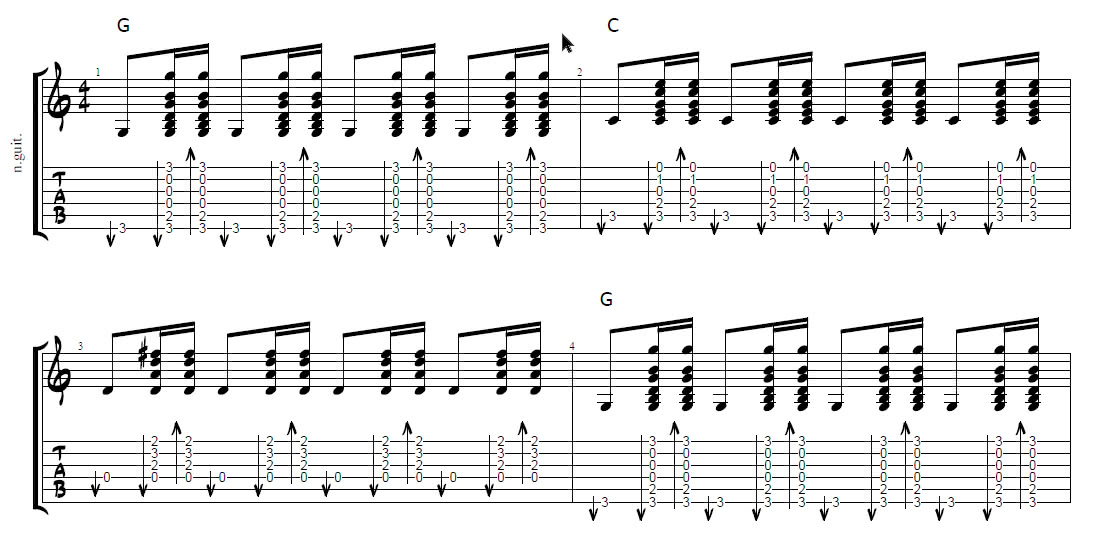 This next one is playing the sixteenth notes at the start instead of after like the last pattern. 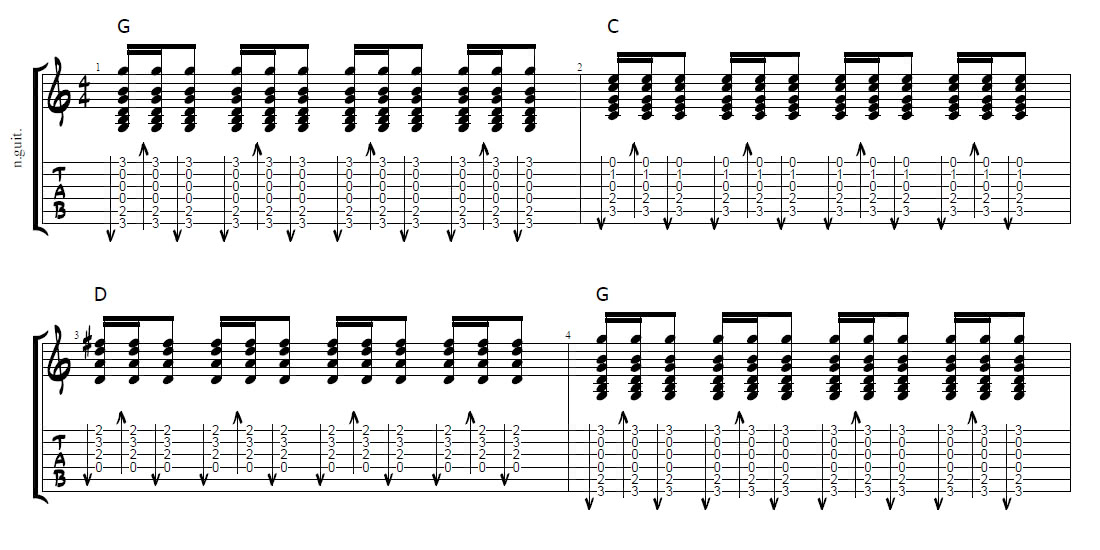 Here we are back to eighth notes again on this common rock and pop pattern. 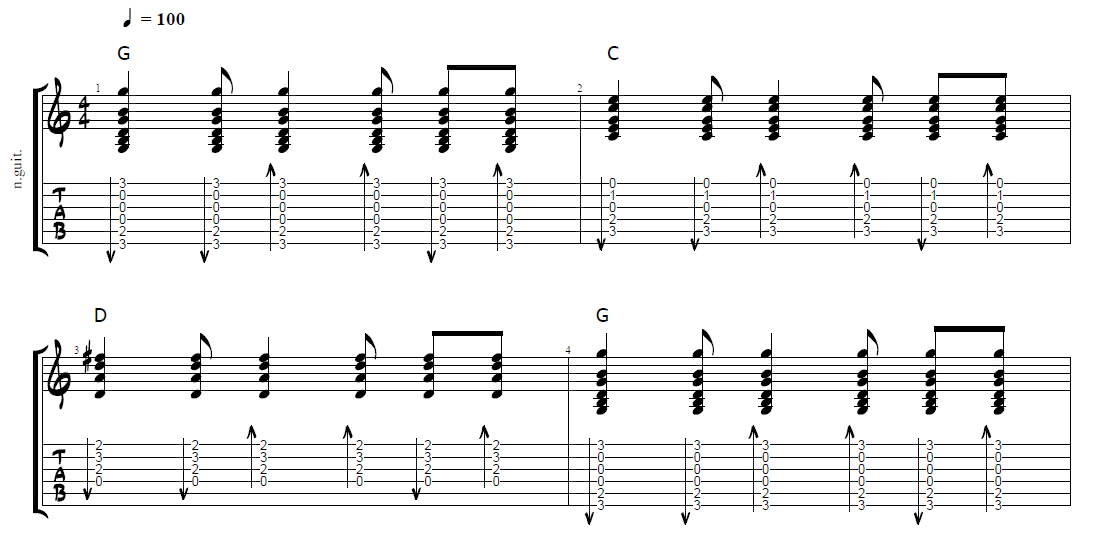 Ska and reggae are defined by their offbeat rhythms, as in you often don't play on the beat. Reggae is a great genre to get to know rhythm.

Pattern 8: Leaving out the third 'and'

A very common strum you will see in many genres, and it of course can have variations and sixteenth notes added in if you want to really spice it up. It is very simple, but for some reason leaving that third 'and' out really makes it powerful! 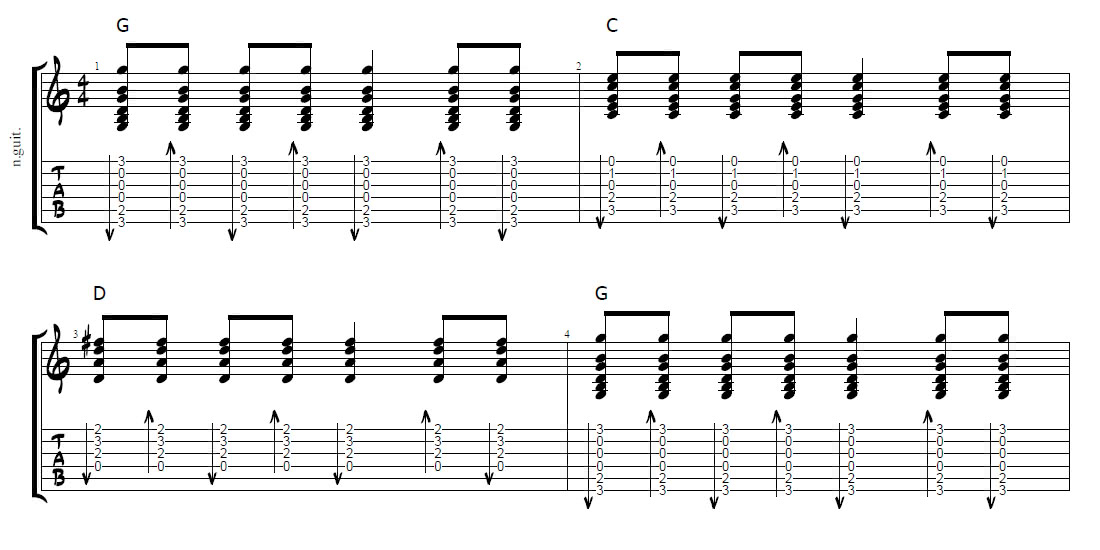 This is a simple pattern that use triplets . Triplets are often used in funk, that has a lot of offbeat playing. And a lot of times a triplet is played on the higher treble frets. You also mute the strings, but that is another article with more advanced strumming patterns.

A triplet is played just as it sounds tr-pl-let, often using alternating strokes. You play the chord 3 times (down-up-down) on 1 beat. The following pattern is specifically conceived to teach you some basic triplets.

You will also find triplets in the metal genre, but for now we will stick with this well-known strum riff for those who want something heavier. 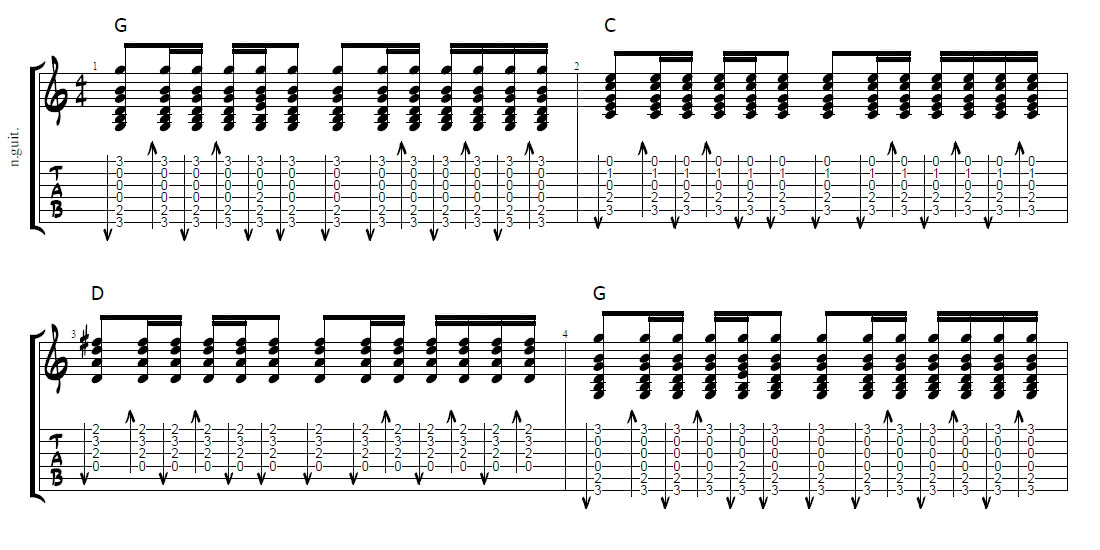 Now that you have tried these guitar strumming patterns, keep practicing until you have them down by memory. After that start playing faster, trying harder patterns, and then soon stepping it up to some fingerstyle patterns.

And if you find you are having an easy time memorizing and playing the patterns, but a hard time with rhythm?

It is time to start playing along with some songs you like until you get the right feel. It will happen, if you just keep practicing.