In this post, we're going to clarify a topic that often confuses many novice guitar players: enharmonic intervals. From a beginner's perspective, enharmonics are tricky because they have different names but the same sounds, how is that possible?

Actually, enharmonic intervals are easier than it seems.

Intervals, as we have already seen in our posts about fretboard intervals and chord construction, are simply a distance between two pitches.

An interval has a quality and a quantity.

Let's start with the quantity: to determine the quantity of an interval, we simply count how many notes there are between our two pitches,counting the notes of the major scale: C, D, E, F, G, A, B and C.

So, we can now show the complete table of Interval quantities

When dealing with interval quantities, we have 7 different options (the 7 notes of the major scale).

But in an octave there are 12 semitones, so we use interval qualities to get more specific.

Here are the possible qualities for an interval

There are some rules that apply to qualities:

So all the possible combination we can have are:

In the table above, you can notice that there is an interval 6 half steps wide that is listed as Augmented 4th and Diminished 5th both.

This is an enharmonic. There are the same notes on guitar, but have different names.

The key to deal with enharmonics is to count on interval quality:

Between the intervals C to Eb and C to D# there are 3 half steps, but with a difference:

That's is: they are 3 half-steps large both, but with 2 different names because they have different quantities.

An example enharmonics with chords 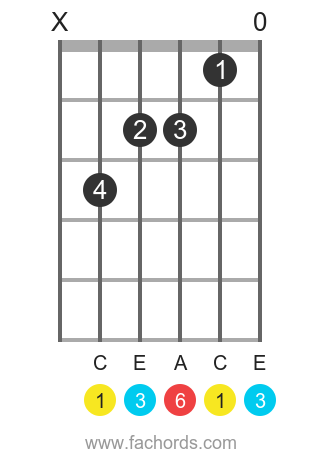 This chord is composed of the Root (C), Major Third (E), Perfect Fifth (G) and Major Sixth (A) 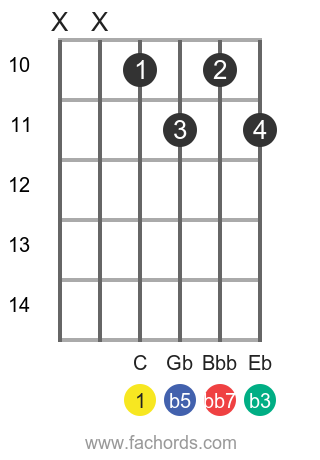 Did you spot where the enharmonic is?

The note A in the first chord and the note Bbb in the second chord have exactly the same length, 9 half-steps, but they have different names because of the note involved:

You find more examples of chords structure in our online guitar chord library.

I hope to have clarified a bit what enharmonics are and how they related to intervals qualities.

At the end of the day, it strongly depends on the context in which you're operating: if you're building a seventh chord you'll have a certain set of intervals; in the case of different chord type you'll have a different intervals set.

Stick to the counting notes method (quantity) and your life will be easier.

Chord construction: learn how to stack intervals to create different types of chords, and apply these concepts over the entire guitar fretboard..

Find the fretboard interval diagrams created from all the combinations of root position and interval types. This is the basics of chord building..