We all start out learning G, C, and D as they're amazing training wheels for budding guitar players. They teach you how to read chord diagrams, to prepare for changing your fingerings, as well as building the fundamentals of picking hand techniques.

However they can harm your playing if you want to progress to a higher level of playing, and there are several reasons for this...

In this article, I'm going to tell you why learning chord shapes forever freezes you in the beginner/intermediate stages of playing, and what you can do to break out of this and make your chord playing is more exciting and fresh to listen to.

At the beginning, you'll have no choice but to use these chords. So don't take this as a message that there's some alternative way to learn chords at the very beginning of your guitar playing journey.

What I'm saying is that Em, Am, G, C, and D are all very limiting when it comes to songwriting, arranging, and playing ability.

Whenever most people use these chords they'll do the following: 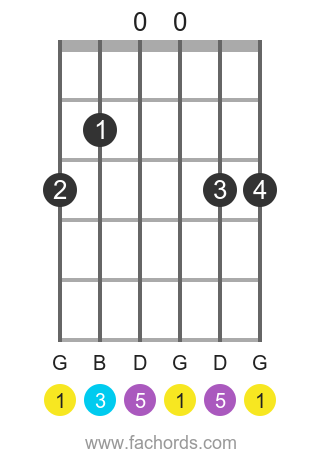 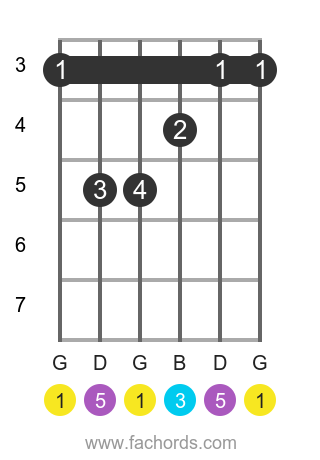 Think about it. When you sit down and start strumming any of the chords I just mentioned...

Do you feel bored? Do you want something a little bit more challenging?

Well I've got some answers for you on how to do that exactly...

Why You Should Know Several Chord Shapes Of The Same Chord

The reason I'm saying basic chords are boring is also that I've spent a LOT of time reading sheet music and reviewing chord shapes suggested in them.

Take a song like Adele's "Easy On Me". You're probably hearing it now in your head. How would you replicate that piano melody on the guitar?

Well, it takes more than what the basic chord shapes offer like:

If you don't want to play Adele that's fine. A lot of guitar players just want to play Jimi Hendrix and Black Sabbath which is perfectly fine. However, not everybody does and I consider myself in that bunch. I also want to do more than strum basic chords.

So this is what I discovered when I tried applying some of the things I just mentioned to some Michael Jackson tunes...

Eventually, I've created a complete ebook about these concepts, Chords Domination | Play Any Chord You Want Across All The Fretboard: this resource will help you see chords not as static shapes but as fluid structures that you can assemble on the fly across the entire fretboard.

For example, have a look at the picture below, it shows you several ways to play the C major chord along the neck. In the ebook, you'll find the same diagrams for 44 chord types. 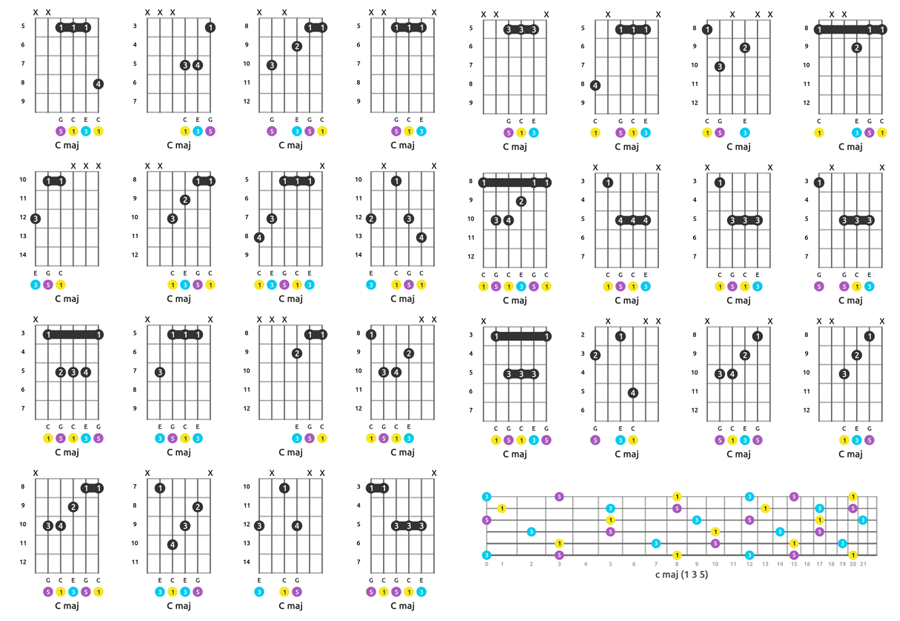 Everything About Chords Changes When You Understand This

I mentioned in the bullet point above that you can break out of basic chord shapes by seeing the chord tones all over the fretboard. I noticed how vital this is when I was arranging some Michael Jackson tunes like Billie Jean, Man In The Mirror, Bad, and Black or White for guitar.

To simplify this process, let's look at the G major scale and the G chord:

I realized that I could play G in a lot more ways once I put together the third and the fifth intervals. If you don't understand why we use those, then all you need to know is that most chords have at least a third interval and perfect fifth, but that's not every chord.

The next thing I noticed is that I can arrange these shapes to harmonize with the melody. So if a melody requires me to play the B note and a G chord, then I could play a G chord in several places while harmonizing with that note.

For instance, 7-10-9-X-X-X would work because it uses the B note as the top voice on the D string.

Personally I love sharing this info with anybody who will listen because I've not liked the fact that so many riffs and progressions are set by open chords and power chords. I knew there had to be a way to literally rearrange these musical ideas and breathe new life into them.

Since then, I've used this idea to:

As mentioned earlier though, you may not have many aspirations to get to a playing level where you may want to use this. So consider this...

When you're playing for your friends and family, or just playing by yourself, would you want to sit and reimagine ways to play what you already know? Even if it's as simple as G-C-D?

There will be times where you'll want to do more than bang the 320033 G chord louder, and many of the ideas I've shared with you here will help you do that.

The guitar is a harmonic instrument, which means you can play more than one note at the same time. Only the piano and a few other instruments can do that.

So if you want to pursue more with the guitar, and advance your chords knowledge starting today, then this is your invitation to start doing so!

For downloadable resources (chords, scales and fretboard pdfs) and to stay updated, subscribe for free here.