Unlike other instruments, the guitar can be explored with a strong visual approach: the fretboard is a grid on which one can draw geometries that will give life to all kinds of sound.

We can shift a pattern up or down the neck, without knowing the name of the notes we are playing, and still, sound good. Also bar chords work in this way.

This classic approach is certainly helpful and makes things easier, but has some drawbacks.

If you rely only on scales boxes and fixed shapes, soon or later you'll find yourself playing the same things again and again, trapped in those shapes, and eventually, you'll experiment boredom!

In this tutorial, I want to introduce a tool that I've found very useful to break fixed patterns and gain freedom on the instrument: the fretboard tones maps.

They are so helpful that I've put 44 of them (one for each chord type) in my complete ebook "Chords Domination".

What Are Fretboard Tones Maps

The logic behind these fretboard maps is really simple. We simply draw all the tones in a chord across the entire fretboard.

Take for example the C major chord. We know that a major chord is created by stacking the root (1), the third (3) and the fifth (5).

Now we draw all the C, E, and G we find on the fretboard. As previously said, on the guitar we can shift patterns along the neck, so instead of showing specific note names we show the name of the intervals: 1, 3 and 5.

Yes, these are the CAGED shapes that many of you already know.

Now let's draw a fretboard map for a C dominant 7th chord. A dominant chord is a major chord plus a minor seventh, which can be found by counting 7 from the root and then lowering it by one half-step.

In the of C, if we count 7 we get to B, which becomes Bb if flattened by one half-step. So, to create a C7 fretboard map, we have to draw all the C, E, G and Bb notes. Again, we want to draw the intervals, not the note names.

What if we wanted a C major 7th? Well, we count 7 from the root and we get to our Major Seventh, B in the key of C:

Basically, with a fretboard map, we can see clearly where the tones in a chord are placed on the fretboard.

To create a chord, we simply have to select the chord tones in the fretboard area we want to play.

There are some guidelines to know:

Usually the 5th is the first to go, because harmonically it does not bring too much. You could even drop the root (1) if there is a bass player that plays it.

The most important tones are 1, 3 and 7, because these tones have the maximum harmonic content. Shell chords, used all the time in jazz, are based on these tones.

If you have a bass or keyboard player who can take care of the root, you could even don't play it to focus on other tones.

Here below you find a diagram that shows you how to create several C7 chord shapes across the entire fretboard.

Fretboard Tones Maps as A References for Guitar Solos

A well knows trick among great guitar soloists is the following: instead of playing scales mindless up and down, try to focus on the notes that belong to the chords of the backing music.

This technique is called chord tones soloing and is the trademark of the best lead guitar players.

Fretboard tones maps are helpful for seeing where are the good notes! Have a look at the video below, and try to play a solo using only the chord tones shown in the video:

Where To Find Fretboard Maps

I've created a complete ebook that contains the complete fretboard notes map for the most used 44 chord types out there. You can get a free excerpt here.

On this website is also available a free web app that will allow creating chord progressions and seeing the tones of the chords on the fretboard, exactly like in the video above.

Give a try to FaChords Chord Progressions Generator now. 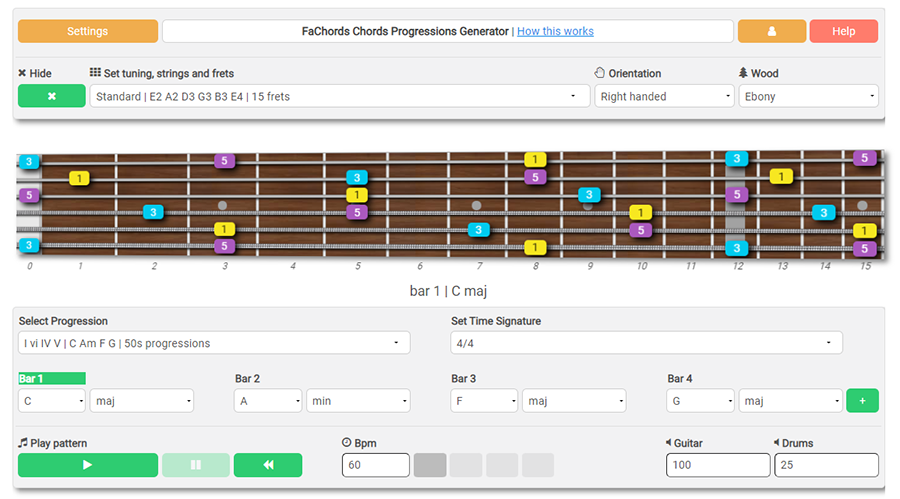 Ok, I hope that the concept of fretboard tones map stimulated your fantasy and will to experiment! To stay updated, subscribe here.