In this tutorial we're going to learn what are interval inversions.

As a quick refresher, an interval is a distance between two notes, or pitches. Depending on that distance, we'll obtain different sounds and feelings.

Some intervals sound very stable while others are dissonant and unstable. This is the basic palette of a musician.

If we take the major scale and count each of its note from the root, we get the following intervals:

Half-steps are also called semitones and correspond to frets on the guitar. 1 half-step = 1 semitones = 1 fret.

By looking at the table below, we notice that computing intervals (so far) is like doing primary school math: we count the notes and get names like Second, Third, Fourth, Fifth, Sixth and Seventh.

We can also notice the types of intervals: Perfect, Minor, and Major.

So far so good.

But what about intervals of 6 half-steps, 1 half-step, or 8 half-steps? They don't exist on the table.

Well, we have to know that we can also have Diminished and Augmented intervals.

The image below shows you the relationship between all the kinds of intervals: 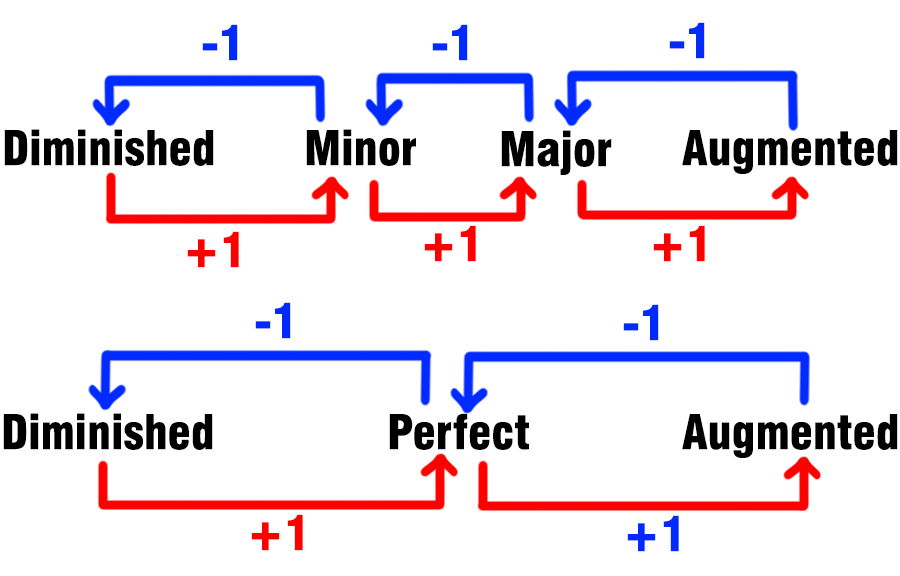 It works in this way:

Now we can draw a complete table with all the intervals, with distances from 0 to 12.

Did you see the row with "Diminished Fifth / Augmented Fourth"? What is this? 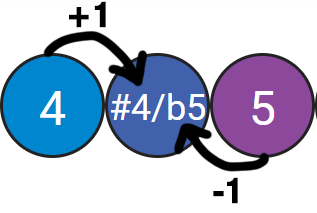 You can also use this fretboard intervals guide to play intervals on the guitar neck.

After this quick introduction, we are now ready to learn about interval inversion.

For example, this is the interval A E (as always on guitar, it's helpful to show this concept on one single string), which is a Perfect Fifth (7 frets):

E A is five half-steps or frets, so it's a Perfect Fourth.

Now it's time to unveil the rule that stays at the foundation of interval inversion: the rule of 9.

In the example above, we inverted the 5th interval and we got the 4th interval, so 5+4 = 9

Here are other examples:

What Happens To Interval Type During Inversion?

You might be wondering how the process of inversion impacts the type of interval. Here's a recap schema:

A Peculiar Interval: The Tritone

The Tritone is an interval 6 half-steps wide. It can have 2 names: Augmented fourth or Diminished Fifth.

The inverted interval of an Augmented Fourth is a Diminished Fifth, and vice-versa. Again, 4+5=9, or 5+4=9.

The particular characteristic of this interval is that it divides exactly the octave in 2 equal parts (12/6=2), and it's the most dissonant interval.

This ends our tutorial on interval inversions. To stay updated and get free access to the free resources, subscribe here.