In this tutorial, we're going to analyze the tritone interval (also known as the Devil's interval) and the important role it plays in chord progressions.

Good music is similar to a story that unravels through peaks of tension and calm landscapes, so dissonant intervals like the tritone are important to spice up things and control the mood of a song.

The tritone interval is 3 whole-steps wide, or 6 semitones. It can be called also diminished fifth, or augmented fourth.

It is the only interval that divides the octave in exactly 2 parts (an octave is 12 semitones). It is placed exactly in the middle.

Using the C major scale as an example, the tritone is the interval formed by C (the root) and Gb (or F#, learn more about enharmonics here)

Here below you find a fretboard map with the tritone interval shown on several strings. Play them on your guitar and feel the daunting sound that this interval creates.

Tritone intervals are one fret and one string up from the root, except for intervals across G and B strings that are 2 frets up, because of the way guitar is tuned

The Tritone Resolution, or "Where Shall We Go Now?"

When you hear the tritone, you can perceive a remarkable tension, a desire to go somewhere else, or, in music theory terms, to resolve!

Resolution is what dilutes the tension and allows the song to proceed in its story.

Tritone resolution can happen in 2 ways. Let's use notes in the C major scale for the sake of simplicity.

Suppose we have a tritone formed by B and F (if you count the semitones between those two notes, you'll get 6)

In this resolution, B goes up by 1 half-step and becomes C, while F goes down by 1 half step to become an E. It's called push because it's like to apply force to the notes and bring them closer to each other. 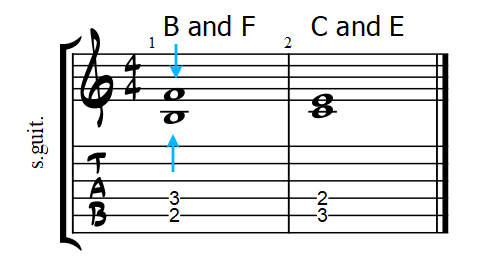 You can really feel the sense of satisfaction and completeness, that this transition created.

In this resolution, B goes down by 1 half-step to Bb, while F raises by 1 half-step to F#. It's called pull because it's the opposite than before: we move the notes further apart, increasing the distance between them . 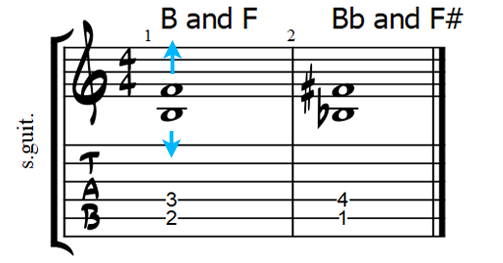 Also in this case, the movement brings satisfaction, it feels like we have come to an end.

The Tritone Resolution in Chords You Already Know

You could dismiss all this stuff, marking it as boring music theory, but I'm sure you already using tritone resolution, even if unconsciously.

What is the most common chord quality that has inside a tritone interval? 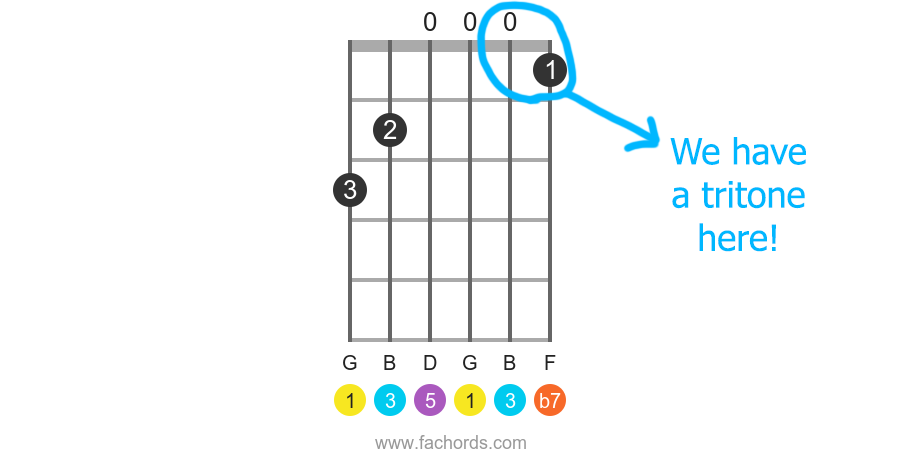 If we take a look at our beloved G7 dominant chord, we can clearly see that it contains a B and an F. The distance between B (the third) and F ( the minor seventh) is exactly 6 semitones, or, in other words, a tritone.

The fact that dominant chords contain a tritone (always formed by the third and the minor seventh, 3 and b7 in the diagram above) is the reason why they have their characteristic sound.

Curious fact: because of its disturbing sound, it seems that the Roman Church, in medieval times, banned the use of the tritone. They called it "The Devil's Interval" and forbade it. Imagine the boring life of a busker bluesman not allowed to use dominant chords! Luckily, centuries later, he had his revenge at a famous crossroad. However, the ban thing is just a myth with no proven sources.

Now, armed with our new tritone intervals knowledge, we can look at some of the most used chord sequences with new eyes.

The C major chord is composed of C, E and G. 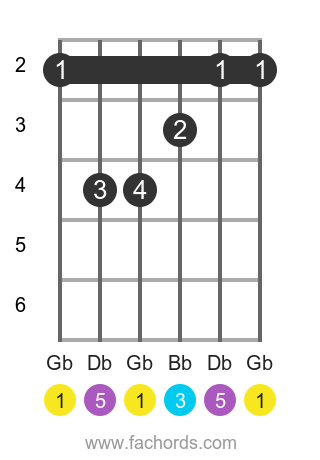 The Gb chord is composed of Gb, Bb and Db.

B goes down by 1 half step and becomes Bb, F raises by one half step to F# or Gb (different names for the same pitch).

That's all for today.

Remember that you can subscribe here to stay updated on new tutorials and gain access to the free download area, on which you'll find some free chords and scales pdf.