Finally, we've gotten around to one of my areas of expertise...strong>finger-style. If you have never tried finger-style, you should. It can change your life. Instead of just mindlessly strumming chords, finger-picking can create an entire tapestry of musical possibilities, even on the most simple songs. Finger-picking is good to learn if you ever decide to branch out into Spanish Classical, Jazz, some Country music, pure acoustic, or bluegrass music .

It is also essential to learn if you ever want to learn additional instruments like the banjo. I play a banjo, also, but what if you decide to do a banjo song like Foggy Mountain Breakdown , but didn’t bring your banjo? I just tune my guitar to open G, and finger-pick it, almost like I would on the banjo. It works….. Some of the most beautiful guitar music ever, has been created with finger-picking by such artists as Khaki King, Tommy Emmanuel, Jim Croce, John Denver, Dan Fogelberg , and others. If you want to see what is really possible with finger-picking, listen to Tommy Emmanuel’s Since We Met , maybe one of the most beautiful songs ever done on acoustic guitar. Other good examples are Jim Croce’s I Have To Say I Love You In A Song , John Denver’s Fly Away, Khaki King’s Goby, Paul Simon’s The Boxer, and Dan Fogelberg’s The Leader Of The Band. Also, Simon and Garfunkel’s Sounds of Silence . 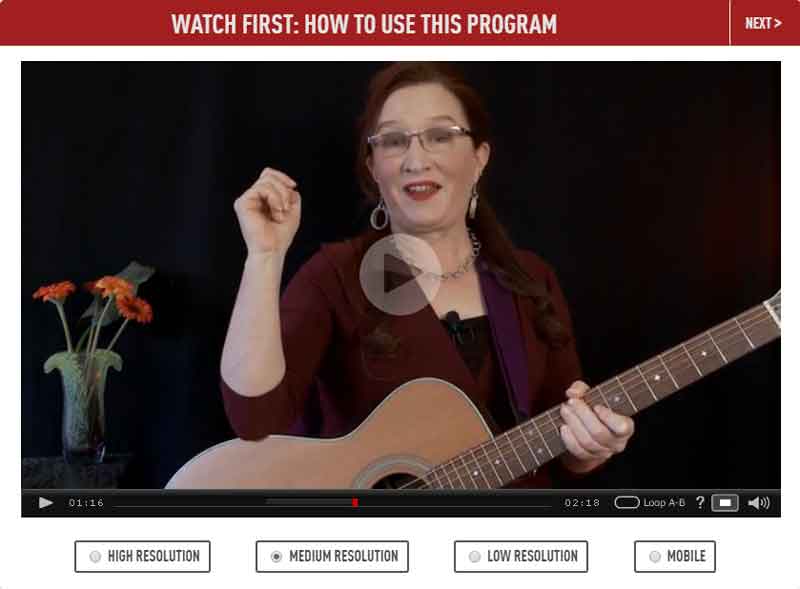 One of the reasons I keep listing songs for you to listen to is because music is created to be listened to, with your ears, your heart, and your soul, not read from a piece of paper. You will never completely understand the music , or the person who wrote it, or who is performing it, until you learn to play by ear. It is a skill you should be honing on a daily basis (just my opinion…).

On to the lesson. Your instructor for today is Lisa McCormick from Brattleboro, Vermont, and she is an Independent singer/songwriter/guitarist that has lesson videos on GuitarTricks.com . She seems to know what she is doing as far as finger-picking goes. I will say that she is showing the picking pattern with no chord, just on open strings. You really should be doing this pattern with an easy chord , like a G, so you will get a good sound, and get used to what it is supposed to sound like.

The pattern she is demonstrating is a variation of a Reverse Roll . The strings you actually pick may differ according to what chord you are playing, but the pattern will always be the same-thumb on Primary Bass Note, index finger on the Dominant Note, thumb on Secondary Bass Note, and pointer finger on the Sub-Dominant note. This pattern keeps repeating over and over. If you remember from previous lessons, this is called an arpeggio . You should practice it slow at first until it becomes natural, and automatic, then increase your speed gradually up to the song tempo you need. It’s also OK to alternate finger-picking and strumming .

A Forward Roll is almost the opposite. It is-thumb on Primary Bass Note , just like the Reverse Roll, pointer finger on the Sub-Dominant Note, thumb on Secondary Bass Note, index finger on the Dominant Note . There are lots of possible variations on these, but learn the basic patterns first. Then it will be easier to modify them to your individual needs.

You can use a thumb pick on your thumb if you want . There are a lot of different kinds of thumb picks. The one I use is the Dunlop Herco Flat/Thumb pick. It has the advantage of being a great thumb pick that doesn’t slide around on your thumb, and you can also use it as a regular teardrop-shaped pick for strumming, very useful for switching back and forth in the middle of a song. It’s really hard to drop one of these.

A similar pick is made by Fred Kelly, but it is much more expensive, and doesn’t work any better. For finger picks, the best that I know of are Alaskan Finger Picks . They stay put, and have the same reach as your fingernails. Much easier to use than regular fingerpicks , which will make you have to adjust your reach to accommodate them.

You can also use your thumbnail and fingernails (I use my fingernails and the Herco Thumb Pick). If you plan to do this, You need to coat your picking nails with Sally Hansen’s Nail Hardener on a regular basis. If you don’t, your fingernails will chip and split, usually in the middle of a song. Bronze strings can be hard on your nails.

You can also just use your thumb and fingertips . You will probably get a blister or two at first, but you’ll soon build up callouses on all of your fingers, and then it won’t be a problem. This has the advantage of not having to have picks with you, dropping picks, and having to look for them on stage, or putting on a new one in the middle of a song, or having thumb and finger picks shift on your finger, etc… You can also strum with just your thumb

Another option is to go to a Nail Salon and have artificial nails put on. I have done this in the past. These work great, but you will have to have them redone every 3 or 4 weeks. Don't try to do it yourself with those home Do-It-Yourself kits. They won’t stay on. Trust me on this…. There are few things more irritating than have a nail come off during a show .

Practice these finger-picking patterns a lot, and you will be amazed at how much better you will sound . Besides, finger-picking is loads of fun……. But don’t be surprised if other guitar players become jealous of your new-found talent.

It reminds me of the story of a woman who had just been diagnosed with a terminal illness, and was told she only had 3 months to live. She asked the doctor if there was anything she could do to prolong her life just a little bit longer, to put her affairs in order. The doctor told her that the only thing he could think of was to marry a Finger-Style guitar player . She asked how that would prolong her life , and the doctor replied, " It won’t, but it will seem like a lifetime… "

This tutorial will show you the basic of fingerstyle and some easy songs that you can try to play without a pick (tabs included).