The Nashville Numbering System is a method of denoting chord letter symbols by using roman numerals, and it's one of the most important concepts taught in guitar lessons, really useful when dealing with chord progressions.

Here below you find a chart with the Nashville Numbers for the keys of C and G. The table shows the chords of the C and G keys and their scale degree in Roman numbers (I,ii,iii, IV,V, vi, vii°).

For example let's say we take one of the more common progressions known as the I-IV-V, or the 1-4-5

Now suppose that your band mate says: "This song is I-IV-V"

Easy, isn't? What you have to do is to understand the relationship between the chord and its scale degree number. In this way, you can denote chords with numbers and deal with chords progressions easier.

Another powerful device used to manage keys and chords (and much more) is the Circle Of Fifths, that deserves a separated tutorial.

Why degree numbers are written in uppercase or lowercase?

In this way the Nashville Number System also shows the types of the song chords.
For example, the progressions I V vi vii ° in C key is composed of these chords: C G Am Bm/b5

Here below you find a complete chart showing the chords for all the keys. As an exercise, try to find the chords for a I-IV-V song in F major key (solution at the bottom of the table).

The chords for a I-IV-V song in F major key are: F Bb C

Each scale degree has a specific function in the rules of modern western harmony, and knowing how to combine them is the foundation of chords progression theory.

Here is a helpful pdf reference sheet with the chords for all the major and minor keys.

Everything starts from the major scale. Musical scales are composed by the so called intervals, that are the distance between notes of the scale. The minimum distance between two notes corresponds to one fret on guitar. You can call it half-step, semitone, or half tone. If you play the open lower E string, and then you push its first fret and play it, you have just played an half-step interval.

Every scale has its own personal sound, that depends on the distances between the notes composing it. In western music the queen of the scales is the Major Scale.

Chord progressions are based on scales, so if you don’t understand scales well, then go back and review that section before continuing with this one. You have to have a good command of scale theory to understand chord progressions.

From the previous section on scales, you know that a diatonic scale is seven notes in an ascending order, at specified intervals unique to the type of scale it is. Chord progressions are based on the diatonic, or chromatic scale. Chord progressions can be based on both major, and minor keys. Remember, a major scale has a half-step between 3rd and 4th notes, and between the 7th and 8th (which is the first note one octave up) notes.

A minor scale has half-steps between the 2nd and 3rd steps, and the 5th, and 6th steps. Also, remember that B to C, and E to F are natural half-steps, which is why there is no E#, Fb, B#, or Cb notes or chords.

So, in the key of C,you don’t have to worry about sharps or flats, unless they are Accidentals (more about those, later…). Each note in a scale is assigned a number, so for the Key of C major , it would be like this:

Some people like to make the 5th chord a 7th, which is OK. It’s a matter of personal preference, and what kind of sound you want. The 1-4-5 chords are used because they can harmonize with every other note in that scale. A standard major chord progression will always be 1-4-5, or in this case, C-chord, F-Chord, G-chord.

Right about now, you are probably thinking, "But a lot of songs have more than just 3 chords...what about them?" Each Progression also contains three Relative Minor chords. They will be the minor chords of the 2nd, 3rd, and 6th notes of the scale, also called “off-notes”. In C, these would be Dm, Em, and Am. So a song in the key of C may also contain an Em, Am, or Dm chord, or any combination of the three. “ But that only accounts for 6 chords. What about the 7th?” Don’t worry. We have that covered as well. If you need to use the 7th note, it will be a Diminished chord, meaning it will be a minor chord, with a flatted 5th note. In this case, Bdim. For the chords progressions in other keys, I have provided a handy chart for you to use. Refer to it often, and it will help to keep you from becoming lost.

Other chords can be added to standard progressions for effect, but once you learn basic progressions, the rest will be easy as pie. You will eventually be able to recognize any chord or pro-gression just by its sound, and be able to transpose from one key to another automatically. If you get confused, just refer to this chart.

In the video below, the popular guitar instructor Randall Williams explains the bit of theory you need to understand chord progressions:

Chord progressions are all built around these particular tones and chords in each key. The question might be, does it matter what key we play in? Well the answer is, it depends. Even though a I-IV-V song can be played in the key of C as C-F-G, or in the key of G as G-C-D, each key can give the song a slightly different feel. Sometimes musicians use the Nashville Number System to quickly transpose keys, to make it easier to play a song, but they occasionally find that the "feel" of the song can change with the key. Each chord progression out there is based upon the relationship between these chords.

For example listen closely to how each of these progressions sound: C-G-Am-F and C-Am-F-G:

When you learn a new chord progression it is important to pay attention to the order of the notes and how each chord leads into another sound or resolves. During a middle of a verse we want chords that lead us on; during the end of a verse we want chords that have a resolution. Usually a song will begin on the tonic and end on the tonic, of course there are exceptions. And we can change a common progression by giving the chord a slight change, by adding a 7th for example.

Go back to that common I-IV-V progression, now let’s add some sevenths and see how it is changed:

notice how it sounds far more bluesy and rocking? In fact many music historians will tell you that the 7th is what makes rock... well rock! Even the Beatles tell a story of riding a bus across town just to learn how to play a B7 chord (remember they had no internet back then!) which allowed them to play like their American rock heroes.

Of course that is how new music is made, if we all play the same I-IV-V progression it will get a little boring, so we make substitutions, we add 7ths, 9ths, 13ths, we change majors to minors, minors to majors... the key is to make sure the music still resolves to an acceptable place.

If we change C-G-Am-F to C-G-A-F, play that and notice how something seems off (because of the A major instead of A minor), it just doesn't have a pleasant sound. Of course maybe there is a musical time when this “off” sound might be great, but generally we want a progression that will make our ears happy!

Check the following video for a demonstration of the I-IV-V chord progression in a blues context: 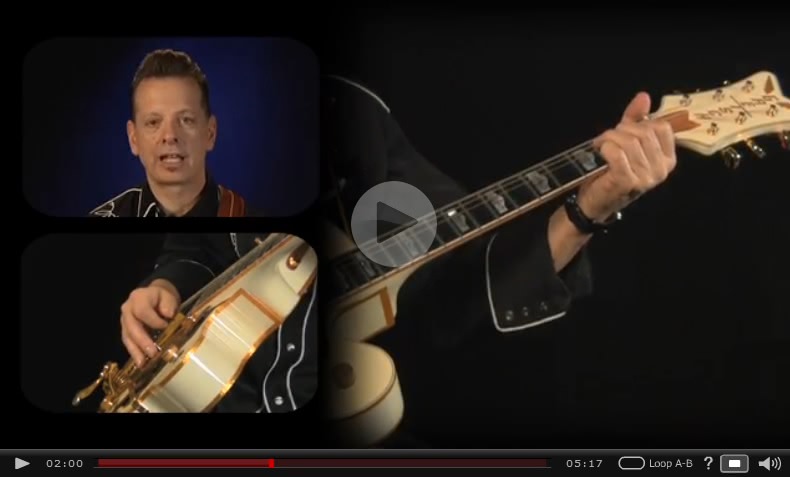 So now that we have an understanding of chord progression basics and the Nashville numbering system, let’s look at some of the more common and simple progressions out there. We will stay in the key of C for all examples. 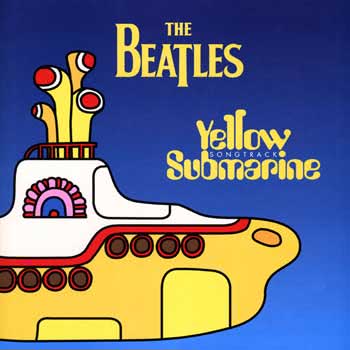 One of the most basic progressions used in folk music and reggae is I-V, or C-G. These simple two chord songs can be very popular such as Camptown Races or Alouette and even the Beatles Yellow Submarine. Often a 7th is added to the V or dominant chord in these songs. 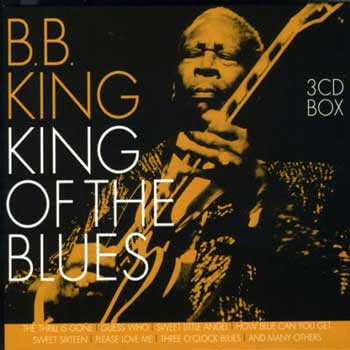 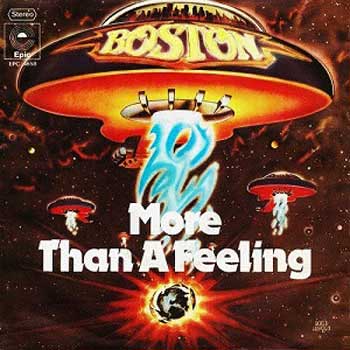 In Rock n Roll another common progression is I-bVII-IV, now that means the seventh chord is a major and flat. C-Bb-F is used by Roy Orbison in You Got It and Boston in their song More Than A Feeling, in fact variations of this progression are well known by those in rock and pop rock. 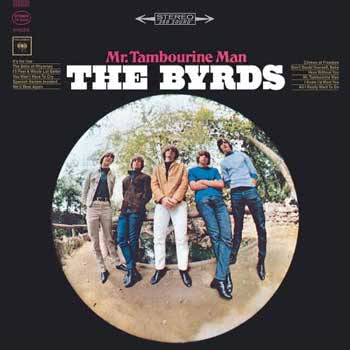 And finally another basic one is the pop rock lydian progression of I-II-IV-I, notice that the II is not a minor (ii) in this situation. C-D-F-C was used in Eight Days A Week by the Beatles and Mr. Tambourine Man by the Byrds.

Now sometimes these chord progressions mentioned above are used for verses, choruses, and sometimes bridges.

Rarely is the same progression used throughout the entire song

However it is important to recognize these progressions. After a while you will start to pick them out when you hear new songs, and even later still you will learn to appreciate subtle changes that songwriters make to common progressions. That way they can create a song that will be liked, yet will still be a little different than the rest. Remember to always pay attention to the way in which various chords sound with each other, a tonic, dominant, and so on mean nothing if they cannot work off each other.

Each time you now learn a new chord, notice how it sounds when played before or after other chords you already know. Experiment as much as possible with chords, keys, and as many chord progressions as you can find!

Now you should have a good understanding of the Nashville Number System and its use in composition, improvisation and songs transposing. Below you find some useful resources for moving forward with the study of chord progressions: 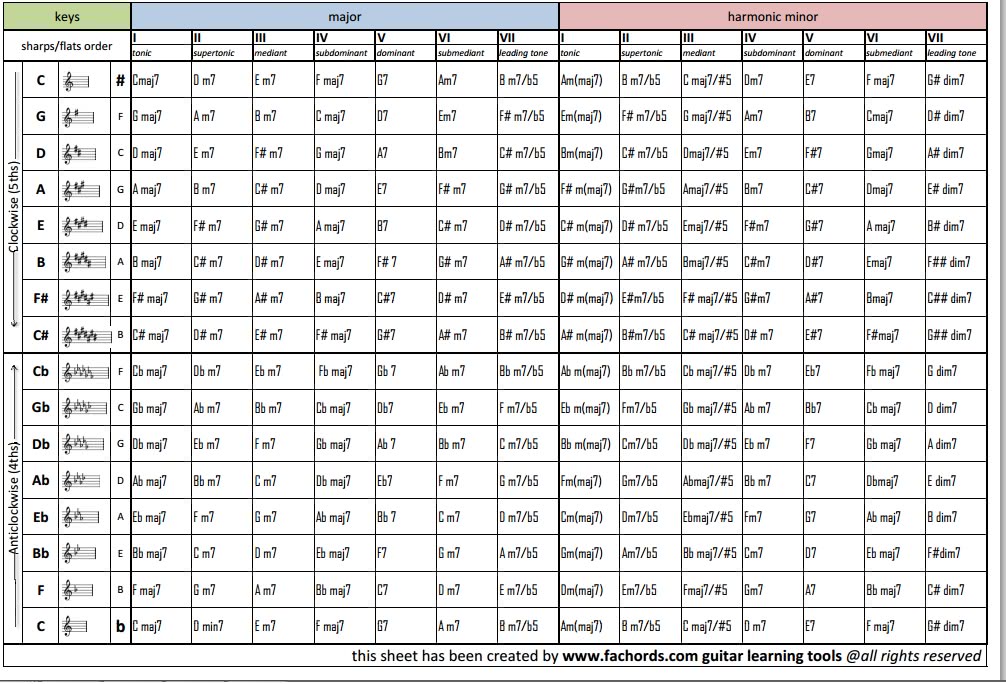 Diminished chords often confuse guitar players, as actually there exist 3 types of those chords. This tutorial will show you how to build and to play diminished triads, half-diminished and diminished 7th chords on guitar. You'll also learn how to use them in your own songs..

How To Transpose Guitar Chords

In this tutorial, you'll learn how to transpose chords songs in different ways: with a capo, with chords tables and with the help of the fretboard. Often we need to transpose songs in a new key to make them easier to play and sing..

This article will teach about Rockabilly guitar story, style and technique. Learn the famous 3 chords changes, the travis picking and the right attitude for playing rockabilly songs.

Songs with the same chord progression

The Circle Of Fifths for Guitar Players | Interactive Tool + Tutorial

Circle of Fifths hidden secrets: a complete tutorial and an interactive tool (for guitar players) to learn how to create songs, manage keys, construct chords and more.