Three chords are all you need to play thousands of songs on the guitar. One of the most common chord progressions used in music is known as the I-IV-V or 1-4-5, and with it you can play quite a variety of songs across many genres.

Here we will discuss where this progression is derived from and why it has so many uses.

Introduction: The I IV V Progression 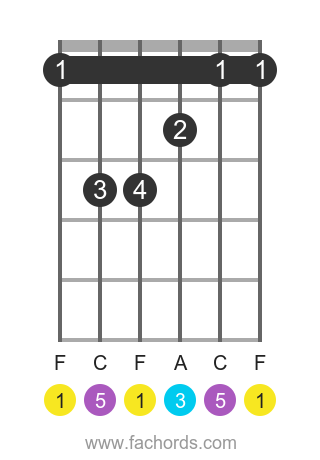 If you haven't studied any basic music theory yet, now is a good time to start or brush up.

In the western scale there are 12 notes and the distances between them make all the difference in how they sound. These are note intervals and the best place to start for ear training.

Each semitone difference has a particular sound quality, some are major, minor, or perfect. The first, fourth, fifth, and of course the octave are known as perfect because they sound the best.

These intervals are consonant and strong, and where songs usually begin and end. Even when playing in obscure modes and scales, it is common to resolve back to the "perfect".

And the chords built on these degrees end up with the same qualities, they are known as the tonic, subdominant, and dominant.

While the other major and minor chord degrees bring flavor to the music, it is possible for the consonant chords to survive all alone.

In fact, bringing in other chords can disrupt and change the mood. If we want a strong composition that stands out, the I-IV-V is the way to go.

This concept also applies to the Four chord progression.

This table is taken from my Roman Numbers vs Nashville Number systems tutorial, have a look at it to better understand chord progressions notation.

I IV V Chord Progression in All Keys

Now it's time to try this progression on guitar! Here below I've put an image showing the I V IV progression in most common guitar keys. Try the chords in all keys and get used to the sound!

These diagrams are an excerpt from my complete ebook 52 Chord Progressions | Learn How To Connect Chords and Create Great Songs , in which I'll show you many progressions that are the foundation of plenty of popular songs, in all keys. 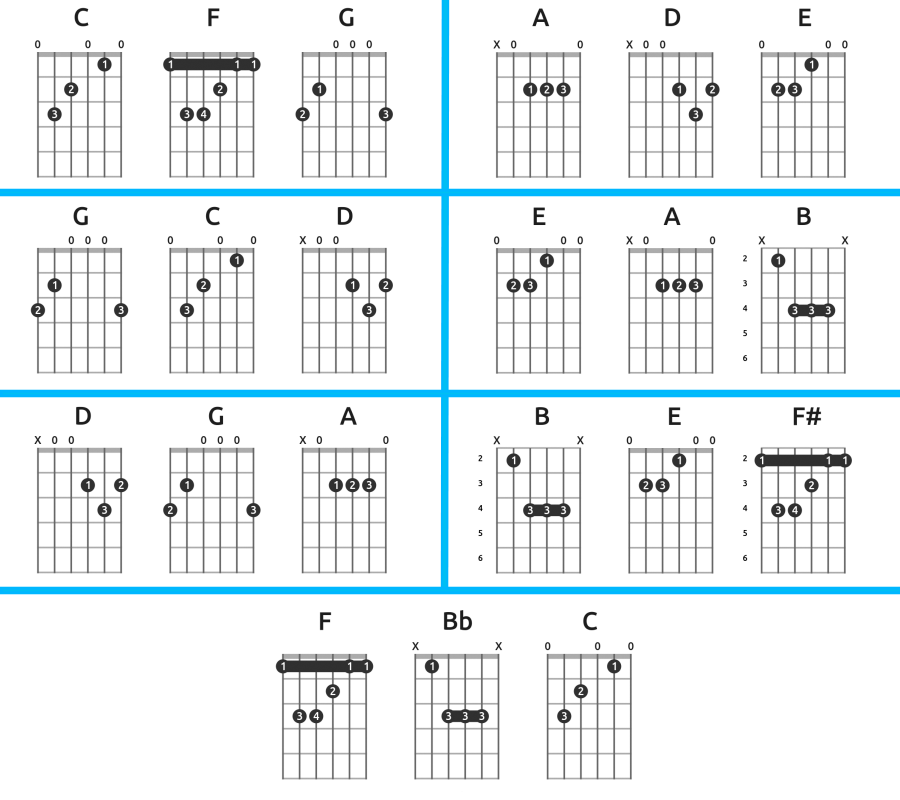 It would be hard to find a genre or style of music that doesn't use the I-IV-V, almost everyone has it in a verse or chorus at one point. It is most common in folk and popular music, as simple consonance appeals to everyone.

We will use the Key of C first, so play a simple C-F-G and back to C again, notice the F is the "weakest" of those chords.

The I and V are the strongest and can hold a song on their own, but when the IV is involved its less than perfect qualities help build tension.

Songs with just the I and V or I and IV get a little repetitive. The extra added tension and chord is all that you need to write some great music.

Keep in mind that some songs use it the whole time, others for just specific sections. Folk classics "Like a Rolling Stone" and "Blowing in the Wind".

However you will quickly find a lot of variation and different orders. Almost all of the early blues genre is the same I-IV-I-V-I, they simply go back to the tonic before going to the V.

Another trick is to use a V7 when it comes to blues, jazz, country, or rock. It adds a little more tension to an already solid chord progression with examples like "King of the Road", "Johnny B Goode" and Blue Suede Shoes.

And by playing them in slightly different orders or as extended chords we can create a variety of songs and genres.

These three simple chords with some added tones can be an entire career of guitar playing.

Many musicians have found fame on the I-IV-V7 alone.

Variations Of The 3 Chords Progression

We can try different orders as with the blues like; I IV I V I or a I IV V IV I.

Of course once we start on a different tonic then we are no longer playing a I-IV-V progression. Playing C-F-G has a different feel then G-F-C which is usually shown as a I-bVIII-IV, it still sounds great, but it's not really a variation when we change the key.

However, don't let the details of music theory stop you from experimenting. Try any order that sounds appealing to you.

Along with rearranging these chords there are also many ways to extend them, the most used extension of V7 was mentioned above. But musicians have tried all manner of additional notes in search of a new sound.

Not Only Major and Minor Chords

After all, just playing I-IV-V all the time does get boring, a little extra can really stand out.

There are also many variations where we don't add, but we drop notes within the chord, like the third. Just using the 1 and 5 on the scale results in a power chord, which is very common in rock, alternative, and metal genres.

"Wild Thing" has a I-IV-V5 and a lot of 90's songs sometimes use all power chords (this allows for a nice consonant base to sing, riff, and solo over). The song "Good Riddance" starts off with both power chords and extensions with a I-IVadd9-V5.

And besides extensions there are also substitutions, and the most obvious one to make is a minor for a major.

"Louie Louie" has a I-IV-v (have a look at my Nashville vs Roman Number System tutorial to understand the differences between uppercase and lowercase notation) which is what makes it stand out. Play the V vs the v on your guitar and see how it makes all the difference!

Sometimes songs use all minors in a i-iv-v manner like "Black Magic Woman" and even a more modern example with "Get It Together" in hip hop. This change to minor of course leads to a completely different key.

Again, once we start jumbling the orders of the I-IV-V too much or changing them to minor we get away from that major and uplifting feeling.

1 4 5 As A Foundation for Most Complex Substitution

In some cases certain substitutions will take you into new territory and away from the original consonance, but this is not always a bad thing.

As you practice you will see some of the most popular hits just tried any substitution they could with just these three chords.

In the end, the best way to learn different varieties of the I-IV-V is to play as many popular songs as possible across genres. It will not take long to find portions or entire compositions that use it.

They are the best sounding chords and the backbone of western music, and you will soon see that it's hard to play guitar without running into them!

That's all for today, to learn more progressions check my 52 Chord Progressions Ebook and dont' forget to subscribe here.