On this page, I will show you a set of effective exercises to master guitar scales. The risk in practicing guitar scales is to become a scale-robot and playing boring solos that sound like...a scale.

To fight this bad habit that affects many guitar players, the exercises on this page force you to play less "scalarly", with the help of interval jumps, triads and quadriads in scales, and so forth; keep reading to learn more.

All the examples here are based on the C major scale, but you can apply the concepts to any kind of scale.

At the end of the page you can download for free a zip file with the GuitarPro exercise tabs for more than 30 kinds of scales (all the modes derived from major and natural, harmonic and melodic minor, as well as diminished and augmented scales).

The GuitarPro tabs exercise archive has been created as a complimentary resource of my complete ebook Scales Over Chords, check it out if you want to expand dramatically your scales knowledge.

Let's warm up a little bit and execute the scale up and down several time. This is not strictly an exercise to practice everyday, but we start with this one so that you can get familiar with the pattern, that will be the foundation of the following exercises.

Be sure to use one finger per each fret (index on fret 7, middle on fret 8, ring on fret 9, and pinkie on fret 10), to keep the left hand movements efficient, and don't forget to use a metronome.

Exercise 1: Two Up One Down

This sequence introduces interesting picking patterns that will give you hard times, but with patience and practice it will incredibly help you build your technique.

Exercise 2: Three Up Two Down

Same concept of the previous exercise, but with longer fragments. Are you able to spot the sound of this sequence in some of your favorite solos? 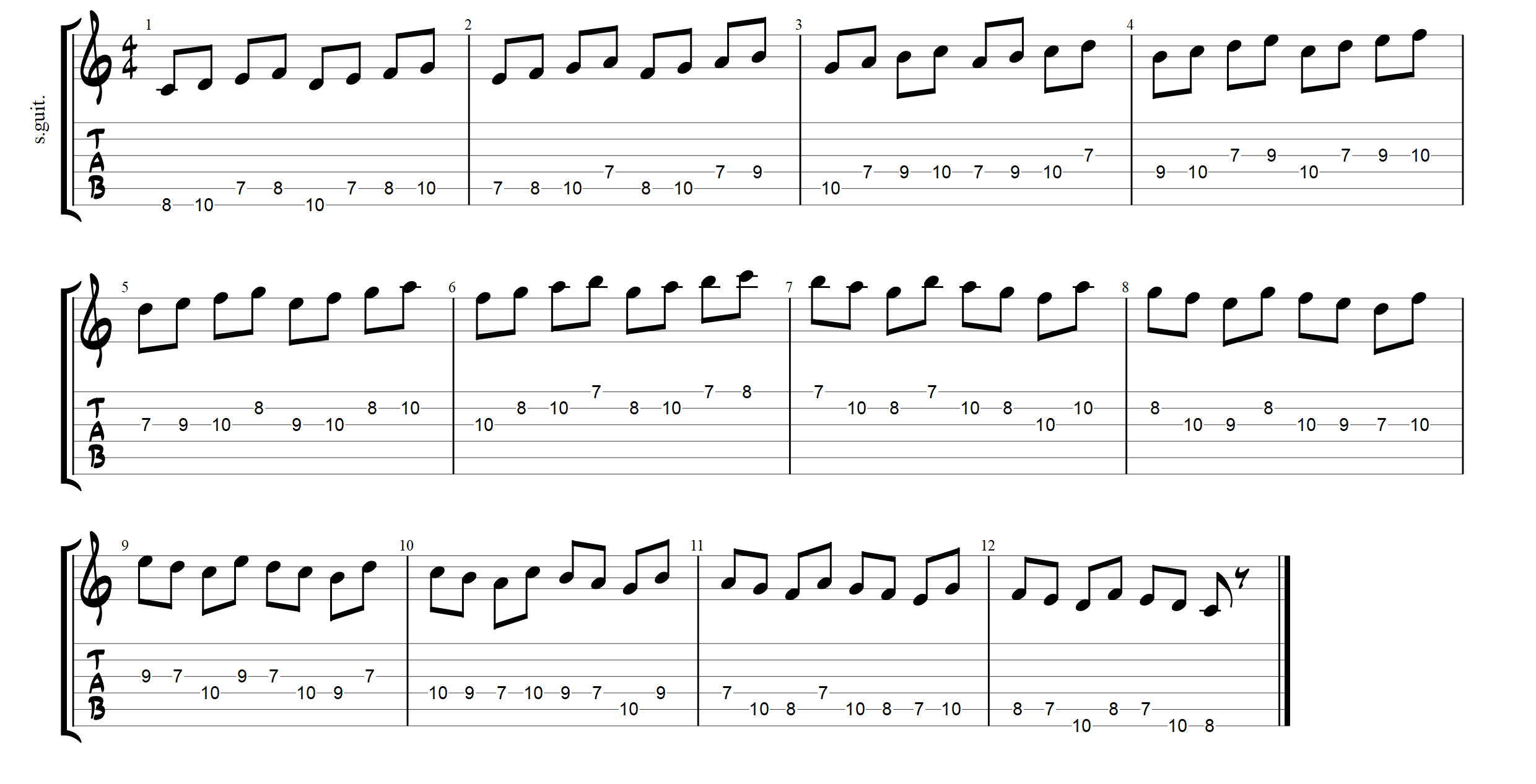 We begin to break the scalar sound by playing the pattern with third intervals. This simple trick highlights all the chords generated by the scale. Put attention to the sound of those micro-arpeggios that come out by playing a scale by thirds. 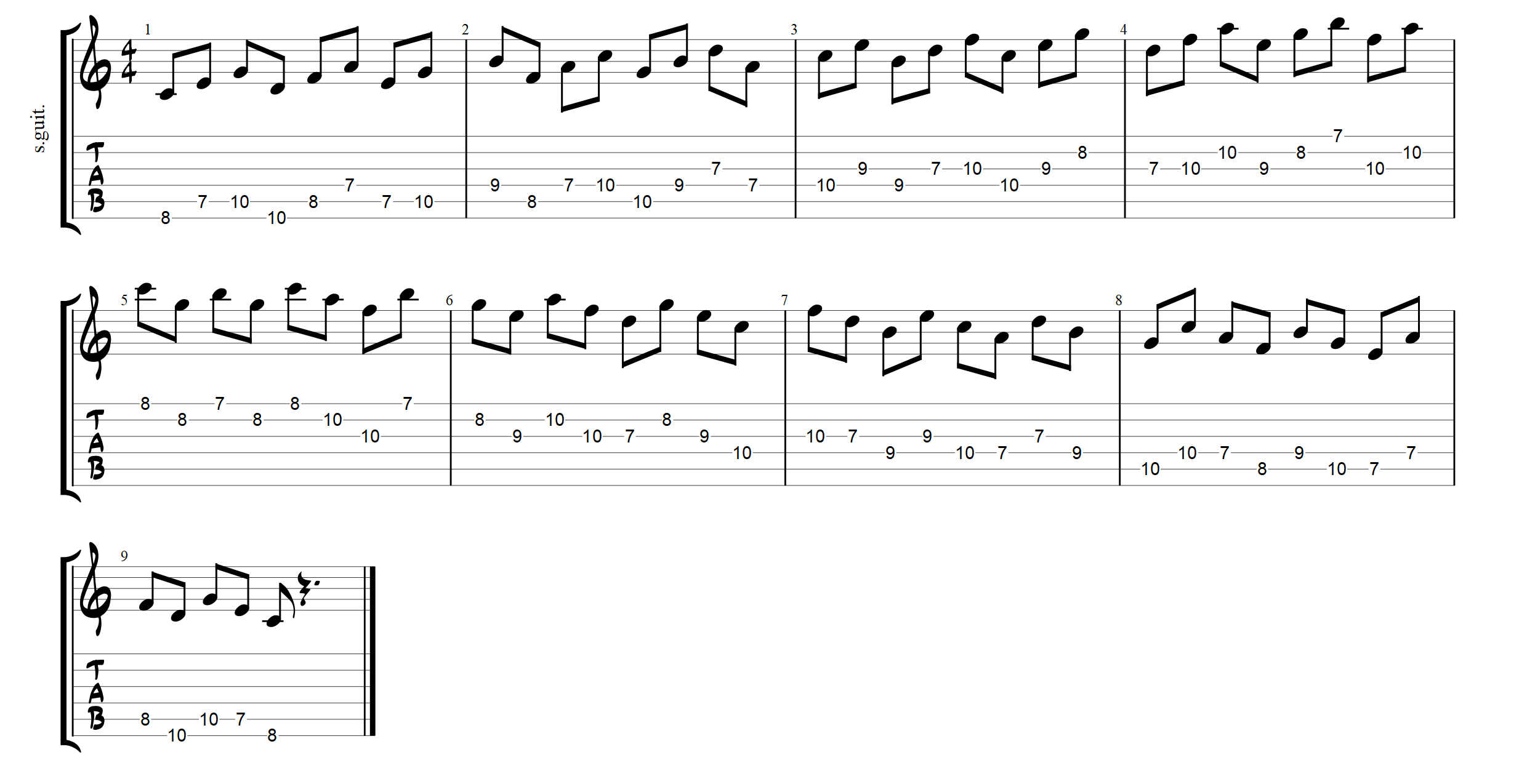 We expand the concept of the previous exercise by adding one more tone; in this way we can hear the seventh chords generated from a scale. This skill will be useful when you'll have to improvise over a chord sequence and you want to highlight chord tones. 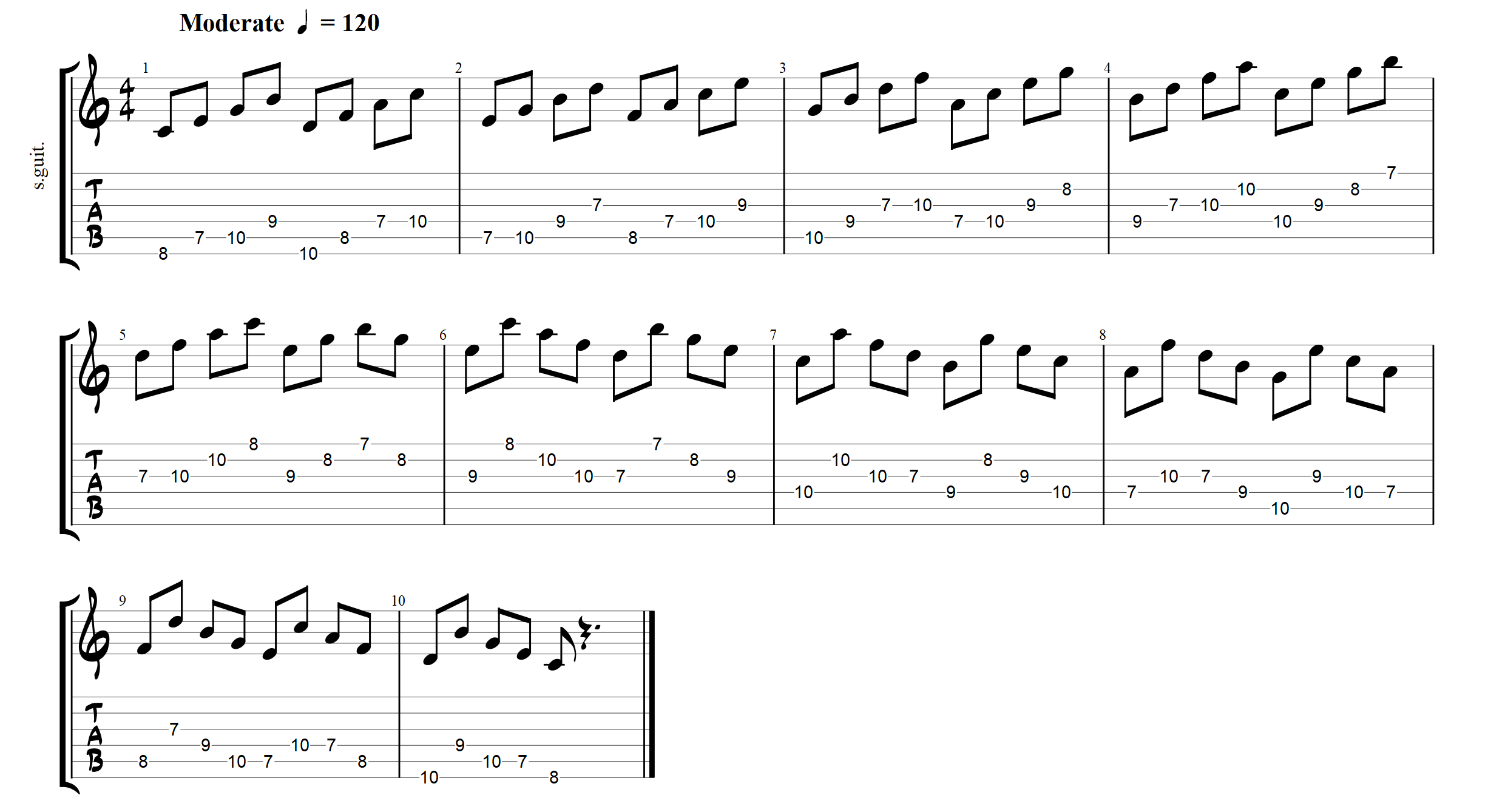 A simple variation that creates nice rhythmic effects and forces you to care the right hand picking work.

Same as before but the odd number or repetitions (3) make things more interesting. Your alternate picking skills will explode!

Sixth intervals are great intervals that give a fresh feeling to your melodies. This exercise, if executed for enough time, will help you internalize this sound; as sixth intervals are quite large, using this element in your solos make them less similar to a scale. You'll have to use string skipping to play this sequence.

Fourth intervals belong to the world of suspended chords: chords that are neither major, nor minor. They have a really modern sound and having this interval in your arsenal will help you to generate more creative ideas.

Often fourth intervals are neglected by guitar players, because the notes are on the same fret; this requires to roll the same finger on two strings, an operation that is slightly more difficult than playing notes on different frets. Don't be wrong and learn your fourths :-)

On the free download area you can download hundreds of GuitarPro tab exercises for all kind of scales.

This archive have been originally created for my ebook Scales Over Chords, an ebook that will show you how to play many types of scale along all the fretboard, as well as which scales to use over any chord type; now the GuitarPro archive is available for free to all FaChords Guitar subscribers.