The harmonic minor scale is not your normal western sounding scale! It has one simple semitone difference that immediately gives it harmonies that are not in the normal seven musical modes.

This extra dissonance leads it to sounding like an Arabic scale and creating difficult chords to play over.

Did you know? There also exists a scale named Harmonic Major Scale

How do you play the harmonic scale?

The first place to start is with our natural minor scale or known modally as Aeolian, which is built on the 6th degree of the major scale.

Giving us the formula of:

It is a very common scale and one you should be familiar with as it works great over most minor chords. The harmonic minor scale has the same notes except the seventh is raised, giving it the final formula of

This is an important distinction as that raised 7th creates a leading tone and all kinds of new harmonic possibilities. Try playing the A harmonic minor scale to get a feel for it, you may notice it has a Middle Eastern flavor. It was once known as the Mohammedan scale as it has similarities to Arabic music scales.

This may seem like too much information to take in, but it is important to understand the varieties of minor scales. They don't always exist exclusively in a song and in many cases are mixed. You will see a quick passing harmonic minor in many pop tunes, but it is brief.

While we are mentioning scale formulas try the Hungarian minor scale with a raised 4 (1 2 b3 #4 5 b6 7). It has more of an Eastern European feel.

These different kinds of minor scales will sometimes have multiple names as they are used all over.

Here below you can download a free pdf with the most common pattern for playing the harmonic minor scale.

For more diagrams, check my complete ebook Scales Over Chords. 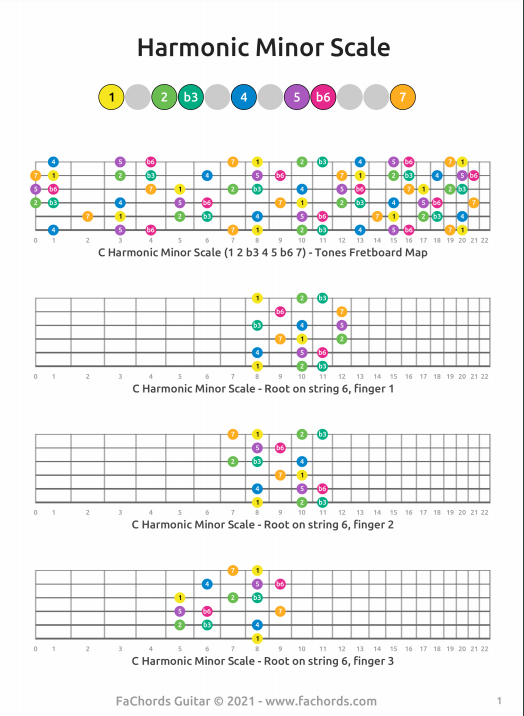 Chords and Progressions for Harmonic Minor

Of course, your harmonic minor will not have the same applications as the natural, as our chords that we can make are changed quite a bit. That raised 7th has created more dissonance and made it harder to resolve, which makes it less popular among composers!

Yes, you are reading that right the III is augmented and the ii and vii are both diminished. A C harmonic scale will give us the chords

The most important part to takeaway is that our scale allows our V to be a dominant chord, like a V7. Despite the dissonance of the scale, it provides interesting ways to play around this dominant seventh.

This odd assortment of chords makes it perfect for playing over minMaj7 as they are made up of 1 b3 5 7 notes. If you have an imin(Maj7) then you will want to play a harmonic scale over it. The VI can be used as a maj7 and the diminished can both be used with a 7th like m7b5 or dim7.

And further extended chords will be min(Maj9) and other 9ths based on their position and chord degree. A iv chord may be as simple as a m9, while the ii can be as complicated as a m7b5b9.

The point being that the harmonic minor scale has some specific chords and sounds so you must be careful when using it.

But as we mentioned, the harmonic minor is just used in parts of a song, particularly over V7's. All those other chords will not be used as much as the major V in a minor scale. The most common progression would be V7-i, like E7-Am. And you would only likely be playing the A harmonic scale over the E7 chord. The natural minor would be used for any other parts.

Other possible but simple progressions are i-iv-V7 or ii(dim)-V7-i. Or if you just have a ii-V7-i you can just use the harmonic minor over the V7. The III+ is not used that often in progressions, so that is not one you will have to worry about.

We are not going to find a ton of "popular" examples in harmonic minor as it has its own unique flavor to it. Most songs that people like use natural or melodic minor, however heavy metal and its subgenres don't mind the odd sound. Considering how much metal is influenced by classical music, this is no surprise.

The "Sultans of Swing" is a great example of the quick V7 use. The song is mostly in the natural minor until the V7 with a progression of i-bVII-bVI-V7.

"Tonight" also uses a V instead of a v.

It's not hard to find examples of songs that do this, but it's so brief it's not the best example of the full harmonic scale sound. Instead we need some that have more prominent examples like the pop "Easy Please Me", jazz flamenco type tunes like "Mediterranean Sundance, or "Stash".

And even though the metal genre uses it quite a bit, it is still mixed in with other minor scales. Great examples are "Masters Apprentice", "Hangar 18", and "Far Beyond the Sun". If that last one sounds familiar you may remember a similar harmonic minor use in the Castlevania videogame.

You'll notice all the songs that have more of the harmonic scale, sound a little strange and exotic. Our ears are simply not attuned to those chords and intervals. For the most part you will see the harmonic minor scale in passing like this.

It's true that because the harmonic minor scale is different from the usual modes you will be playing in, it doesn't have that many applications. It has an odd sound and creates some tense harmonies, but if that is what you are looking for in your composition, the scale is worth trying. It may not be used a lot, but it is good to have in your arsenal.

Here below you find a video that shows you two different fingerings for the E harmonic minor scale, one covering 1 single octave and one that goes all along the fretboard.

If you need help reading this diagrams, check the guitar tab tutorial

The more you play music in the harmonic minor, the more you will learn to train your ear for picking it up. If you compose and write your own tunes you will always know a great way to give your minor songs a little more tension.