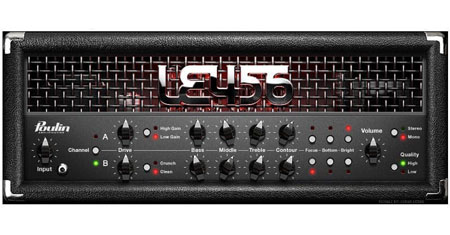 If you read and watch enough guitar lessons, you will see a variety of opinions on whether you should practice with a clean guitar sound or with distortion. For the best results on guitar, you should use both. In this article we will discuss the difference in guitar tones like clean, crunch, and distortion and how they should be used in practice.

The original popular American instrument in the 1800's was the loud banjo. Guitars gained in favor in the 1900's but they couldn't keep up with the volume of the big band instruments and orchestras. While early microphone recordings helped the guitar stand out, it was amplification that made it the centerpiece of most pop music from 1955-2000ish.

These days guitars do not have the prominence they once had, but they are still relevant. And they never would have reached such popularity if it wasn't for the exploration of guitar tones. Especially for a solid body electric! With no acoustic space and just an electric signal, we must try everything we can to get the guitar sound to stand out.

The Need for Distortion

A clean guitar signal can sound amazing in the right song but as the blues and rock progressed, artists began turning their vacuum tube amps up to high volumes so they would cause distortion. The next step was accidentally or purposely damaging amplifiers to get specific gritty sounds.

Broken equipment is mostly what led to many of the first effects like fuzz boxes. The Rolling Stones, Jimi Hendrix, and The Beatles all used various fuzz distortion boxes, and then Pink Floyd came along with a slightly cleaner but still distorted sound.

Musicians and companies were then actively finding new ways to modify the electric signal to sound complex and warm, or loud and the obvious lead instrument. You can now choose tube screaming distortion, solid-state-distortion, a myriad of overdrive pedals, amplifier speaker distortion (nothing like regular speakers); and they can sound crisp or crunchy!

Why practicing with a clean tone is better

One of the best parts of playing with a clean sound is that each note mistake and imperfection is audible. If you have sloppy technique, then you need to start with clean tones. Even if you have plans for playing distorted music, you need to have some guitar basics down before moving on.

Generally, a beginning guitarist will want to practice with a clean and quiet tone, it doesn't help the confidence when there are loud distorted squelches of the wrong notes.

When you are playing scales and clean arpeggios, they will also sound a lot better and nicer with a clear tone, too much distortion will muddy them up. Alternate picking, legato, and tremolo picking are usually better to start out with clean tones.

Proper picking articulation will also be a lot easier to work on with a clean sound, as any distortion will cover it up. With large amounts of distortion, the gain is so high it is hard to differentiate between individual note dynamics.

Practicing with a clean tone is usually best when you are first learning a song. Get the technique down and the proper articulation and then move onto distortion if it requires it.

Why practicing with distortion is better

The compressed and amplified signal creates a lot of noise and feedback. When a guitarist normally plays with a clean tone they will be surprised by the extra noise of distortion. But there are many times when that comes in handy.

Muting strings is also a lot easier to practice with distortion, and it is one of the main reasons to use with the overdriven sound. It is a lot more obvious and louder when you do not mute the proper string. When you mute strings you do not want a single sound to come from them, and with distortion you will hear any problems.

A little bit of distortion will also help with note bends, especially if the overdrive gives it sustain. And sweep picking works best with distortion, so you are aware of any excess noise in the strings.

With more of a crunch sound, you can focus more on practicing dynamics, tone, and expressivity. Your distortion doesn't always have to be used in a loud or excessively overdriven way. Fuzz and crunch effects can be used to shape the notes beyond just your physical playing technique.

With the right amount of distortion, you can add overtones, texture, and other aspects to the music that would never be possible with a clean tone.

How to Practice with Clean, Crunch, and Distortion Tones

In the past you would have to buy a nice amp if you were going for a particular sound, or even a cheaper alternative with lots of effects like a Line 6. If you have the money to buy amps and distortion pedals, they are mostly analog and the better choice. But these days there are apps and software that model all guitar tones.

There are many to choose from, and they make it so you can try out a huge variety of guitar tones, just the presets alone are worth it. They will make it easy to play with clean, distorted, fuzz, crunch, and overdrive tones. Guitar amp modeling software is a modern miracle for guitar players.

Obviously whether you practice more with clean or distorted sounds will depend on your genre and style you want to play. If you are going for a clean jazz fusion then you will have a little overdrive and some other warmth, but generally a clean tone. If you are in a death metal band, serious distortion may be necessary.

If you aren't sure, just play it safe and practice with a variety of guitar tones! And don't forget, sometimes you want to turn the amp completely off and just work on muscle memory and hitting notes properly without any signal at all.