Chord transformation is another name for the Neo-Riemannian theory. It is not the standard method of chord labeling and voice leading, in fact in some cases it clashes with other music theory. There are plenty of criticisms of it on the Wiki page, but we have no need to dive that deep, hopefully just the basics might make us better guitar players!

In this theory we are going to transform major and minor triads into new chords based only on similar notes.

There are three basic transformations known as the LPR: leading, parallel and relative; and each one simply moves one note of the triad to make the new chord.

Despite its fancy name this concept is just another way to use simple chromatic movements, which is a common part of rock and jazz. However, since it doesn't have a tonal center, its applications are limited in pop but it does have its place in modern music! 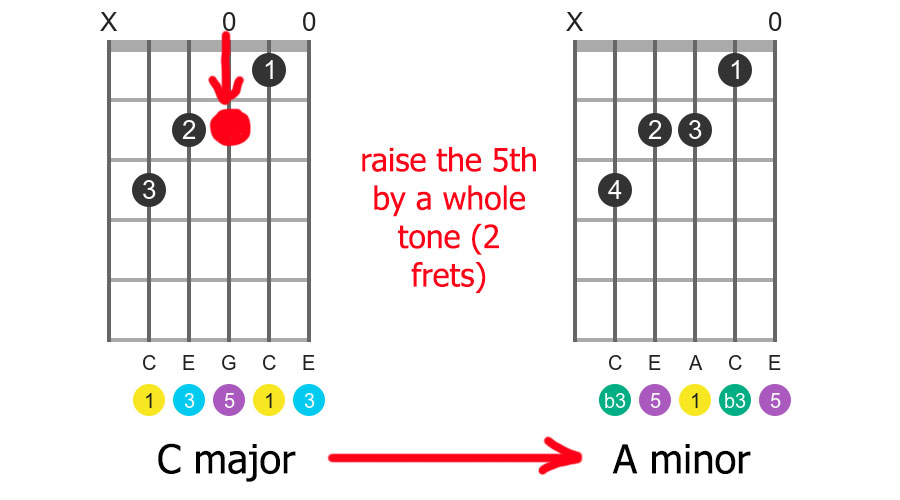 The first transformation is relative or (R), this is done in a major triad by raising the 5th a whole tone.

If we take a C major ( C E G) and raise the 5th (G) to A we get an invertedA minor chord. It's a 1st inversion because we have the 3d as lowest note.

We could also see this chord as a C6, but I digress.

To get the relative transformation of a minor triad we move the root down by a whole tone. Thus, an A minor with its root moved down a note will be a C major.

The major third interval is not changed in either of these movements. 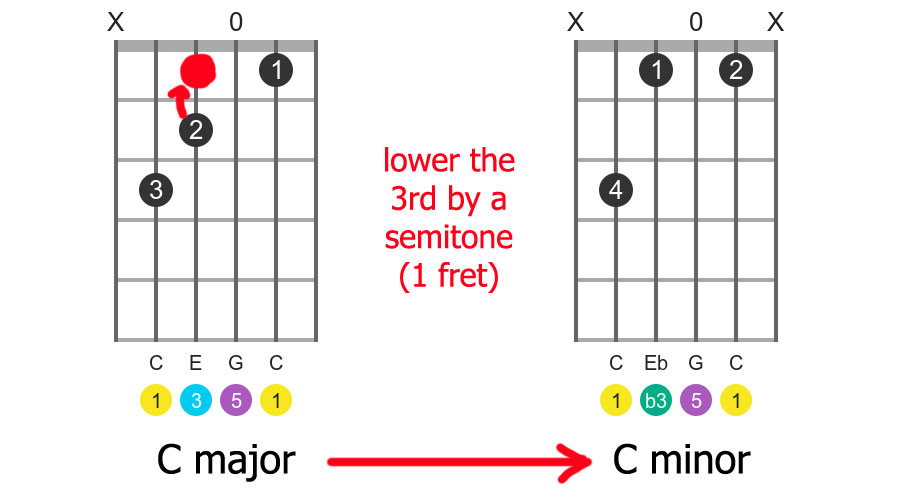 If we want to transform a major triad into its parallel minor triad, the 3rd is lowered by a semitone. So, the parallel transformation of C major is changing the E to Eb giving us C minor.

When finding the parallel transformation of a minor triad to a major, we simply move the 3rd up a semitone. In reverse the C minor will transform into the C major. The 5th interval is the one kept with no changes. 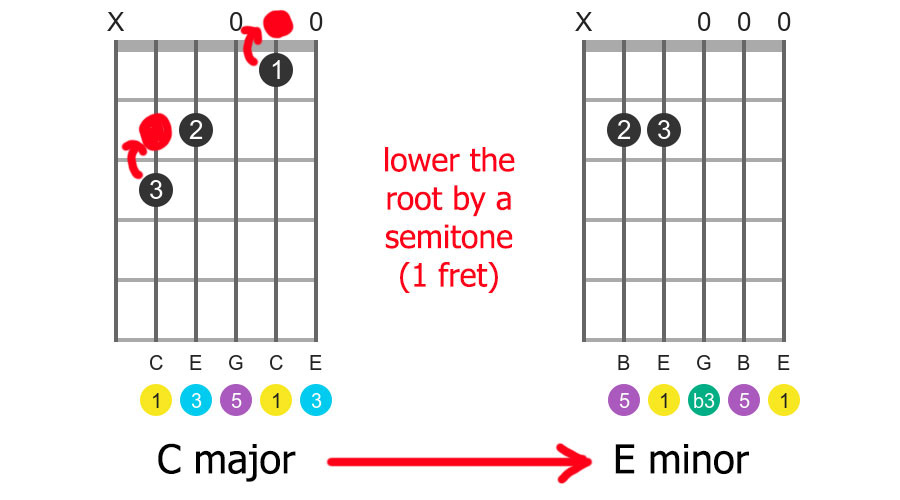 Here we transform the triad based on its leading note exchange. For a major triad we lower the root a semitone, so a C major will become an inverted E minor. It's a 2nd inversion because now we have the 5th as lowest note of the chord.

When changing the minor to a major in a leading tone exchange, we move the 5th up one semitone. If we do this to an E minor the L transformation will be to a C major. Here the major third is the note that is preserved.

It is important to note that all three of these methods (L, P, or R) will work the same in reverse. If you take the chord you transformed it to, and apply the rule, it will change back into the original chord.

Here below you find the recap tables for relative and leading transformations.

This table shows you the chords in a major scale (check the numeral notation tutorial if you need a refresh):

In this table you can see the relative chords created by raising the fifth by one whole tone (2 frets), that's the relative transformation:

And here the chords created by lowering the root by a semitone (1 fret), that's the leading transformation:

There are a few more transformations beyond the LPR worth trying, but not as common. And they are essentially combinations of the three above, but in specific orders. This is where it can be confusing because we have to remember to think in chord inversions.

Always make the transformation from its first inversion, despite which inversion you arrived at. 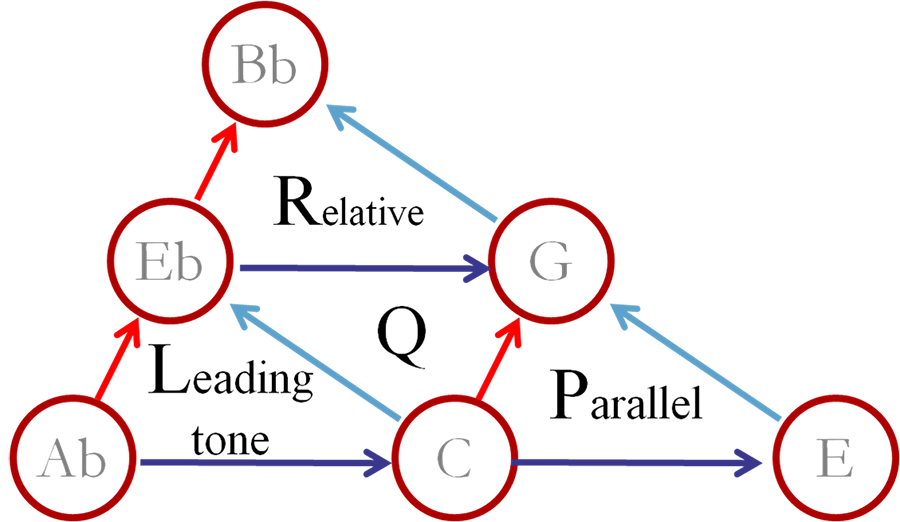 This can be found by using RLP. Start with C major which (R) transforms to A minor, and then A minor (L) transforms into F major and that (P) becomes F minor.

The (S) or slide can be done by using the order of LPR. If we take C major and (L) transform it, we get E minor. And then if we (P) transform E minor we get E major and finally an (R) transform will make that a C# minor.

Here we use LPL to transform to the new chord, which creates a hexatonic cycle or a series of six chords all related by simple semitone movements. A C major (L) moves to E minor and then (P) moves to E major and then (L) again to its final Ab minor.

There are more modern transformations based beyond just triads and into extended chords. While they vary in name all share a similar but small chromatic movement between two chords that usually aren't related at that moment in the composition.

How to Use Chord Transformation

It can get frustrating fast, as you must pay attention to whether you are moving from major to minor. And you must be aware of changing the inverted chord, or at least which is the 1,3,5 or it will get messy.

That is one reason the charts and graphs are helpful to save time in doing the mental math.

It's also not the easiest topic to explain because there aren't many great examples. After all we are dealing in very nonspecific harmony here, it is meant to be meandering almost!

These sequences are very common in modern films as background atmosphere music. Because they have no tonal center, they can make it so the music is present, but not adding much emotion or story elements. If you want to compose for a film, you will be using these transformations in less dramatic scenes.

In jazz and fusion music PL, RP, or RL sequences are common to see for improvisational purposes. If we wanted to use the PL sequence, we would move like this.

Some specific modern examples are Frank Zappa's "Easy Meat", "Dinosaur" by King Crimson, "Morning Bell" by Radiohead, "Sour Girl" by STP, and "Blow Up the Outside World" by Soundgarden.

You will notice they do not sound like normal rock and pop, and in some cases, they would fit a movie soundtrack! Usually in popular music we like tonal centers so chord transformation will not be found in great abundance.

As a guitar player your goal is not likely to be analyzing classical pieces with Neo-Riemannian transformations, but they will come in handy when looking for a different approach to a new song or chord progression. The LPR movements are just more tools in your arsenal of writing and creating new ideas.