Like most modern genres, country guitar music is a mix of elements and riffs from past styles. Over time the term has evolved and it now encompasses quite a variety of songs. Some listeners prefer older country music like Hank Williams, while a new audience is discovering it through HipHop crossover artists like Lil Nas X.

Regardless of the era all country music will have similar scales, chord progressions, and rhythms on the guitar.

Country music was a result of Black southern gospel and American folk styles mixing. Folk music originated from many cultures across the U.S. melting pot, the most popular styles being from the Appalachian mountains and the cowboy lifestyle of the southwest.

These styles took advantage of the rising tide of syncopation with songs like "Big Rock Candy Mountain".

Meanwhile the church gospel had morphed through ragtime, jazz, swing, and R&B which was soon renamed rock and roll. R&B and rock are defined by their accented backbeat on beats 2 and 4 along with the heavy use of blues scales.

The mass production of records in the 1950's led to almost every music style incorporating rock and dance backbeats into their style.

The technology was great but unfortunately music was sold to mostly segregated audiences leading to certain genres having social labels. Despite some country songs using the same elements of R&B, it was mostly sold to White audiences.

Early rockabilly was rebellious, but country music eventually morphed back into a more socially acceptable style.

After the 1960's it branched into the bands who were more folk like and didn't use drums, and those that used drums and were more country rock. Bluegrass was the extreme end of country that preferred a folk approach and country rock led to genres like Country and Western, Southern Rock, Americana, and roots rock.

By the turn of the century, country music had branched into many directions. However even the modern bands that use it are still playing the same musical themes.

The Music Theory of a Country Song

Country and folk music genres are generally very easy to play and sing along too. And that doesn't mean the music is inferior, it's just not complex.

One reason it is always so popular and catchy is that most listeners want a fun song to tap their foot to! Which brings us to rhythm, not all country music uses drums. It is important to know how to keep the rhythm of the song going on your guitar. 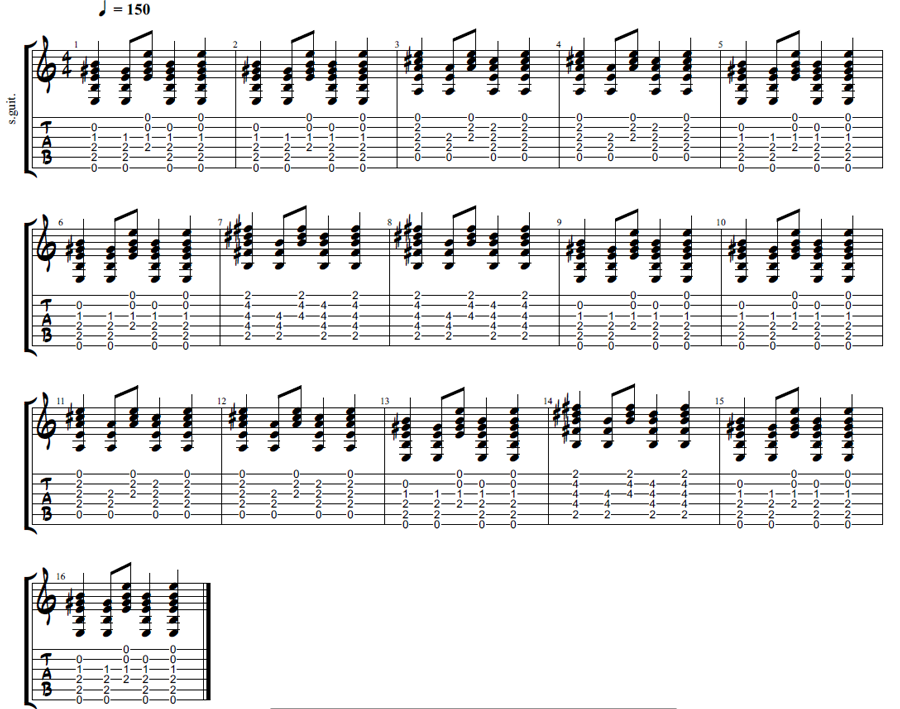 One of the most common ways to keep a rhythm in country music is to use an old ragtime trick! You play bass notes and chords back and forth, this creates great syncopation and a catchy contrast.

There are different ways to alternate bass when picking notes, but Travis picking is one of the more common methods (named after the country star Merle Travis).

Many of the picking styles country stars use were influenced by banjo, mandolin, and even fiddle playing.

One of the more common country and folk chord progressions is the 1-4-5 or I-IV-V. Start with the key of G and play the progression G-C-D.

Use the G major scale to pick notes in between each chord change.

You don't have to pick many, just be sure to alternate between a pluck and a strum so that it makes you want to move. As you improve, start adding more notes and flourishes in, trying different picking styles on the progression. 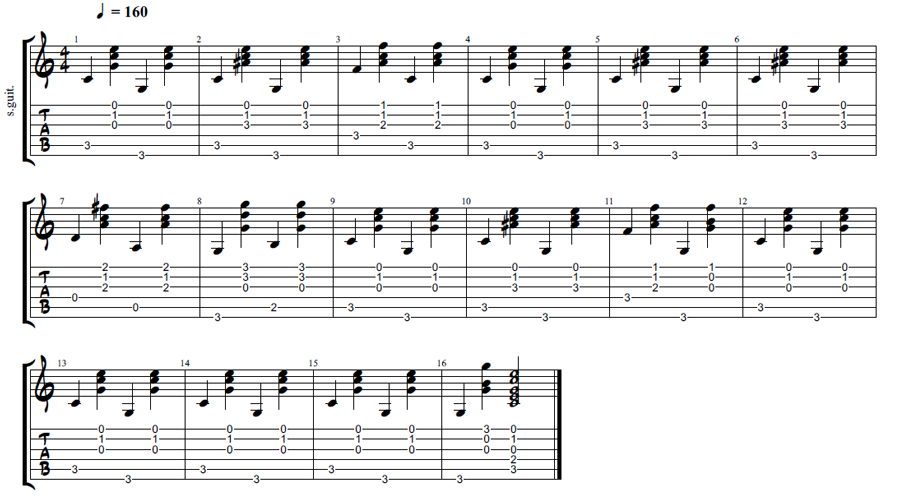 Now we know the folk aspect of country, but to spice it up we add some minor pentatonic or blues scales and more syncopation. Country, rock, and pop all love the I-IV-V7 progression, which gives us G-C-D7.

The flattened 7th on the D gives us more tension and makes it rock more. Besides blue notes you will also use chromatic movement in country songs when you descend or ascend bass lines.

Most country music will be major chords with dominant sevenths, but minor chords do show up. The older cowboy country of Gene Autry and Roy Rogers uses similar jazz chords of the time.

And like pop, some country progressions use the I-V-vi-IV and its variations. It also makes use of 12 bar blues progressions like I-IV-I-V7-I. Like folk music, if you start to make the progression too difficult it will lose its country feeling.

Because country songs are often so easy, most will be accessible to beginning and intermediate players. If you are the type that loves older country the best artists to play are Hank Williams, Patsy Cline, Dolly Parton, and Willie Nelson.

With easy songs like "Jambalaya", "Walkin' After Midnight", "Jolene", and "On the Road Again".

These older style songs are good practice as they have a nice mix of major and minor chords.

If you prefer rockabilly country the best artists to play are Johnny Cash, Carl Perkins, and Eddie Cochran. Their songs "Ring of Fire", "Blue Suede Shoes", and "Summertime Blues" all follow the simple I-IV-V7 format. 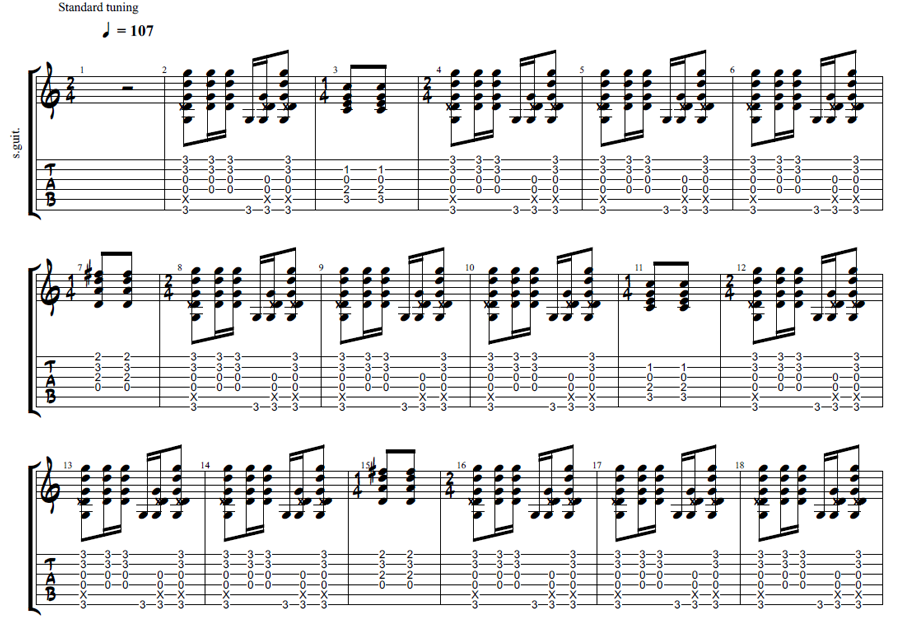 If you prefer a little silliness mixed with your I-IV-V7 country songs, Roger Miller has a lot of fun hits.

John Denver's "Take Me Home, Country Roads" has easy chords, the only part to worry about is the strumming. And another 1970's easy I-IV-V hit is Kenny Rogers "The Gambler".

Another popular country genre was the Bakersfield sound which included artists like Merle Haggard, Buck Owens, and Dwight Yoakum. Their songs have more of a rock backbeat like Southern rock bands.

Into the 1980's and 1990's country was a separate genre than pop and had artists Billy Ray Cyrus with the two-chord song "Achy Breaky Heart", and Garth Brooks with a I-IV-V in "Ain't Goin' Down Til the Sun Comes Up". Alan Jackson's "Chattahoochee" is an easy song and mostly uses the I-IV-V except for a II7 right before the chorus.

Ween is known for their absurd lyrics and antics, but that doesn't change the fact it is an excellent country album. The songs are not difficult, and the session musicians are some of the best in the country music world.

These days the most common country song to play is "Wagon Wheel", it is four chords and very simple. However, like "Stairway to Heaven" it is played so often that some open mics and clubs will not allow it.

Ha! But it really is a perfect four chord country Americana tune for a beginner. If you prefer a more modern rocking country song, Alabama Shakes "Hold On" is just a I-IV the entire time.

After playing a lot of country songs you will see how easy they are, usually the chords are the simple part, the rhythm is more difficult. The best way to get the right strum is to listen to the song and play along until it sounds right.

Because the chord changes are the same you don't have to focus on that aspect. Study different flat and finger picking methods for the country genre that appeals to you.

Make sure to practice more than just 4/4 time. 2/4 is cut time used in faster tempos and a 6/8 shuffle is a popular groove that gives off a very different vibe.

Many of your chords and bass runs will involve the use of open strings, there are times when you play up the neck but sticking to open chords will sound fine. As mentioned you will want to add dominant 7ths and blue notes into your melody to give it more tension.

Because country chord progressions and rhythms are so similar the melody is where you make the song stand out. A good country song has a great lead, hook, riff, or chorus to grab the listeners attention.

Double stops are common among mandolin and violin players, but they are also useful on the guitar. A double stop is only playing two notes instead of the minimum of three that you need for a chord.

This is a similar concept of playing a power chord, except that is the 1st and 5th scale degrees.

Often in country music we are playing the 1st and 3rd or the 6th for double stops. The key is to play them in the correct rhythm of the song.

Arpeggios are also important in folk and country. Instead of always strumming your notes there are times when you can play each note individually in a specific pattern.

If you get good at your alternate picking you can arpeggiate in between your strums and it will sound awesome.

In general you want to stay in simple major, pentatonic, or blues scales and not stray too far. Country is the opposite of jazz, you don't venture outside the modes or common harmonies, and you stick with the tried-and-true formulas.

The best way to learn to play country music is to create random playlists and learn the songs that you like.

Try out a few different eras and country styles and you will find it is an accessible form of music for all levels.

Whether you decide to stay with no drums and pure country or add some rocking backbeat you will discover country music is an easy genre to play on your guitar!