The ii V I chord progression is the foundation of Jazz and is an essential concept to practice if you want to enter in the Jazz realm.

In this lesson, I'm going to propose you a full workout that will help you play instinctively this important Jazz progression, and, at the same time, internalize a number of important chord shapes.

The final target of this practice is to see the ii-V-I progression as a whole chunk, instead of thinking about single chords.

What is the ii-V-I chord progression

The ii-V-I chord progression is a harmonic sequence commonly used in jazz and other genres of music.

It is built on the tonic (I), supertonic (ii) and dominant (V) chords of a major scale.

In the key of C major, for example, the progression would be Dm7-G7-Cmaj7.

The ii-V-I chord progression is used in various genres of music, including jazz, blues, rock, folk, and pop.

It is also used in many popular songs, such as "Autumn Leaves" by Nat King Cole, "All the things you are" by Oscar Hammerstein II, and "In a Mellow Tone" by Milt Gabler.

Benefits Of Learning a Progression as A Whole Chunk

Learning a chord progression as a whole chunk helps you to better understand how different chords fit together in a musical context.

This understanding is essential for being able to create effective musical phrases and transitions.

It also makes it easier to remember a particular chord progression, as you can recall the whole progression rather than individual chords.

This is useful for improvising or writing music, as you can quickly remember and play a certain progression.

Learning chord progressions as a whole chunk also helps to develop your ear and aural skills.

By playing and listening to a chord progression, you can become familiar with how it sounds and how each chord fits within the progression.

This helps you to better understand the harmonic language of music and how to use it effectively.

We want to practice the progression in all the keys, so we're going to use movable chords (without open strings) with root on the 6th, 5th and 4th strings.

This will help immensely expand your chord vocabulary.

Below you find some fretboard maps with the chord tones and the corresponding chord shapes.

Please note that these fingerings are only a subset of the endless options you have, try to stick with them.

If you want to experiment your own shapes, be sure to include at least the root, the third and the seventh (you might want to have a look at my shell chords tutorial to learn more about this aspect).

Now we're going to take a look at the chord qualities we're dealing with.

It is often thought of as an extended version of a major triad, as it adds an extra note to the basic three-note structure.

The major seventh chord has a bright, uplifting sound and often creates a feeling of anticipation and resolution due to its dissonant nature. 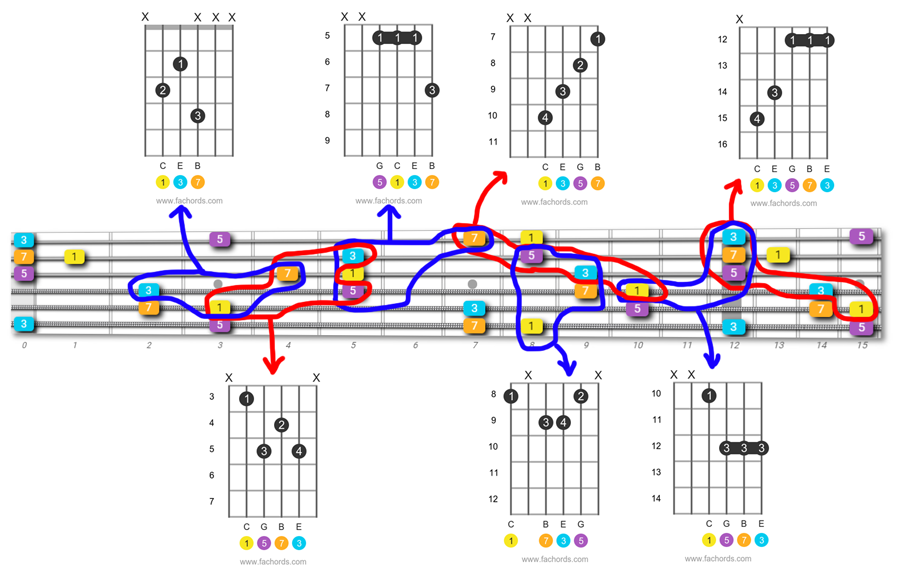 A dominant chord is composed of a root, major third, perfect fifth, and minor seventh.

This type of chord is commonly used to create a sense of tension and instability, which can lead to a feeling of movement and resolution. 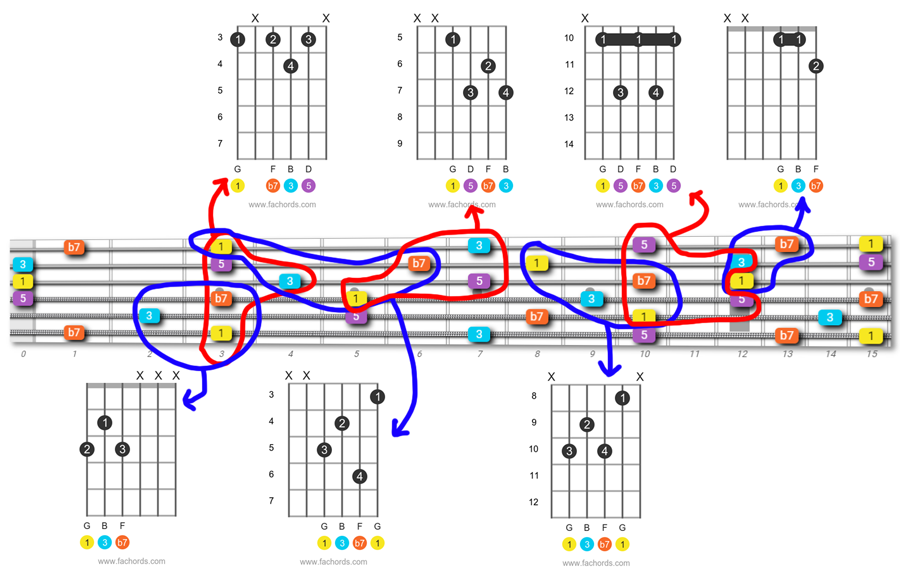 A minor seventh chord is a musical chord consisting of a root note, a minor third, a fifth, and a minor seventh. 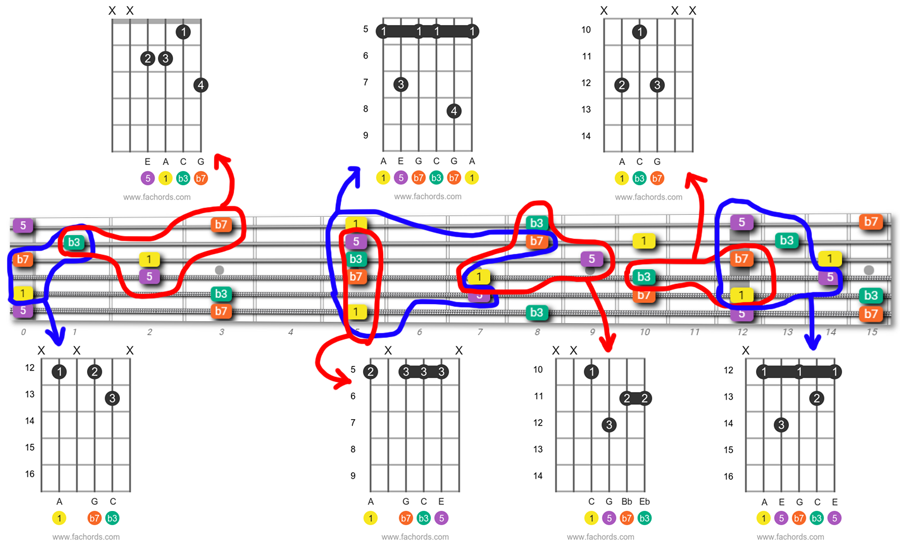 The workout is organized in the following way:

The constraint of staying between the selected frets forces us to use a different set of chord voicings for each key, helping us tremendously internalize chord shapes.

Here below you find all the chords for the ii V I progression in all the keys:

Ok, now you have some material to work on.

It's important that you follow all the keys, even the strangest (wonder how an E# can exist? Check the enharmonics tutorial).

Once you have this stuff under your belt, we will proceed to the minor version of this progression, and learn how to solo over those chords.

But for now, be sure to practice these progressions. To stay updated, subscribe here, thanks!