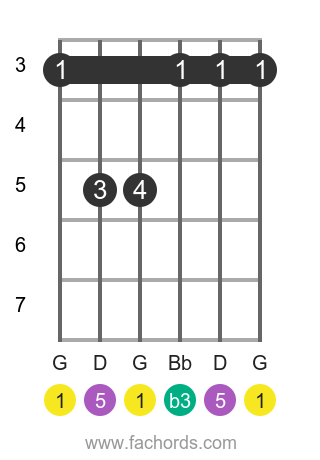 The intervals composing the Gm chord are Root, Minor Third, and Perfect Fifth

The G Minor chord is known as:

The Gm chord is made up of the notes G, Bb, and D

Notes of the G m chord: 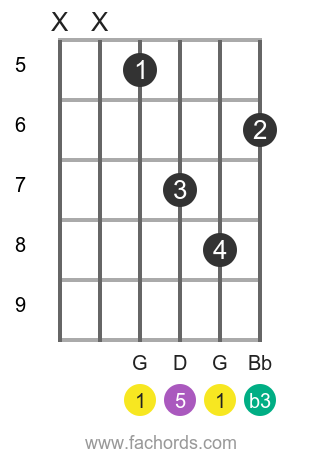 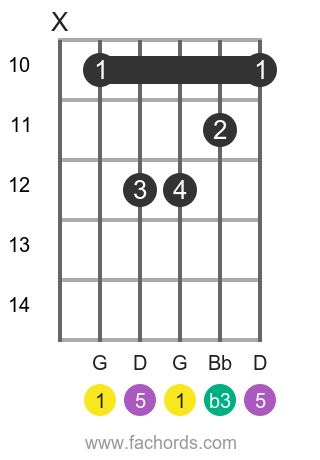 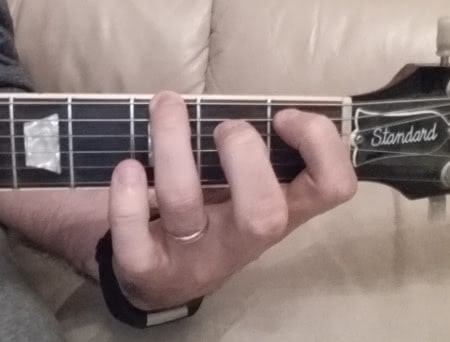 Plus, we're going to see the most common major and minor keys which the Gm belong to. Lots of work to do, but I promise it will be rewarding!

Before beginning, one warning: Often, the stripped-down version of a chord does not sound so good as the original. It is theoretically correct, easier to play, but lacks of sound richness. Feel free to use it while learning, but your final target should be the standard shape.

We're not going to give a full lesson on harmony here, you only should know that a minor chord is constructed starting from its relative minor scale, taking the first (root), the 3rd and the 5th notes. If you want to learn more about this, have a look at our chords formula tutorial.

Here's the G minor scales and its degrees:

If we take the root, the 3rd and the 5th degrees of this scales, we have the tones that compose a Gm chord

How we can apply what we learned so far to the guitar?

Well, if we have a look at the fretboard and where the three notes above are placed, we can start reasoning about our fingerings.

In the fretboard diagram below are shown the notes composing the G minor chord (don't you know the notes of the fretboard? Then you might find useful our guitar fretboard notes tutorial.)

Gm chord notes on the fretboard. Click to zoom

On the guitar, once we know what notes compose a chord, we can take any of these notes on any string for creating our chord shapes. There are some rules, that are not strict but just guidelines:

Easy Gm chord notes on the fretboard. Click to zoom

Gm guitar chord with root on the fifth string. Click to zoom

Here below you find the most common keys (major and minor) that have a G minor chord on one of their degrees.