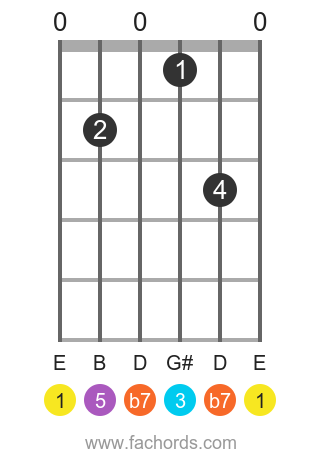 This chord is composed of the Root, Major Third, Perfect Fifth, and Minor Seventh

The E Dominant Seventh chord is made up of the notes E, G#, B, and D.

Dominant chords introduce a tension that resolves on the tonic with a pleasent effect.

Notes that compose the E 7 chord:

How the Dominant Seventh chord is built: 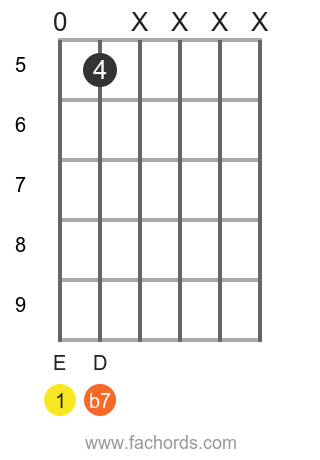 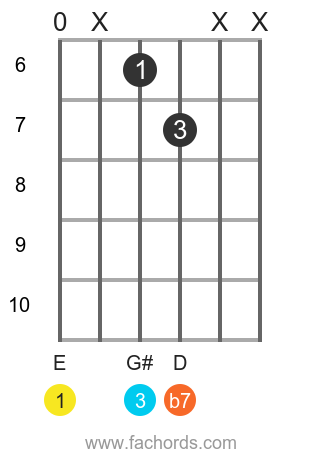 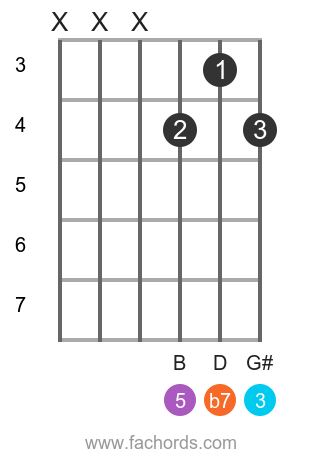 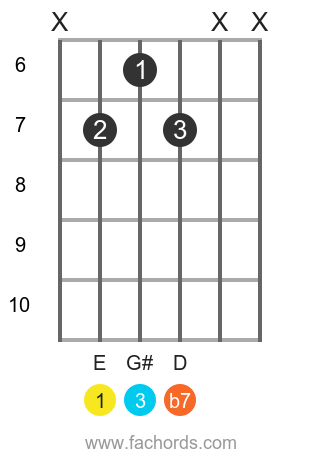 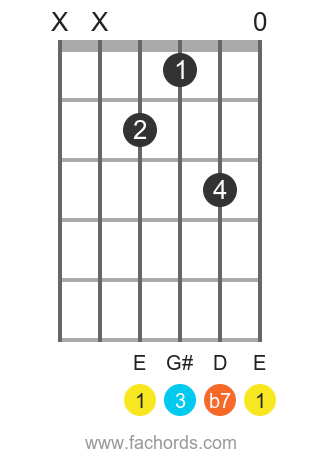 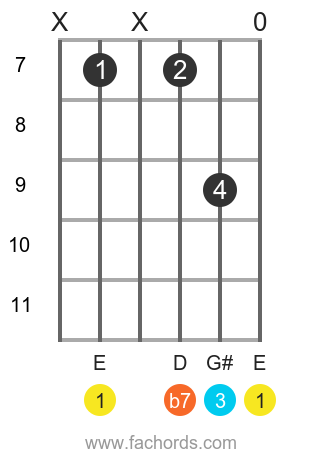 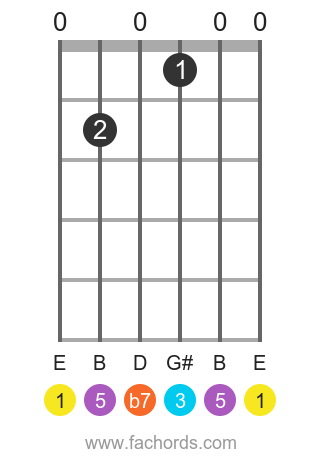 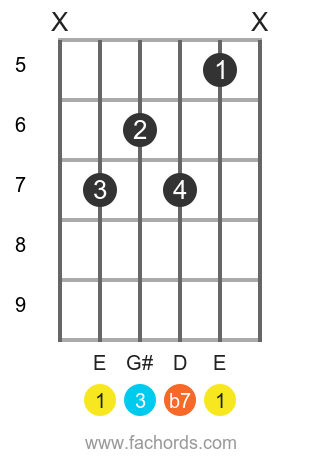 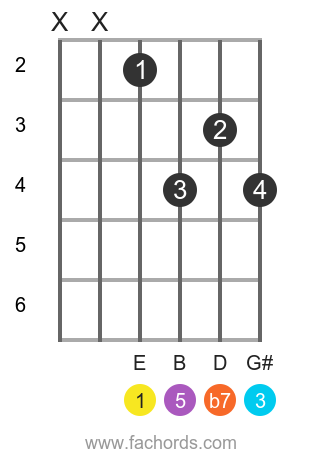 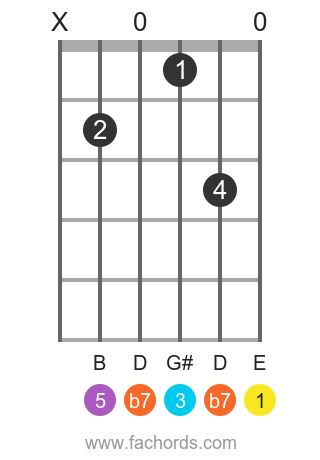 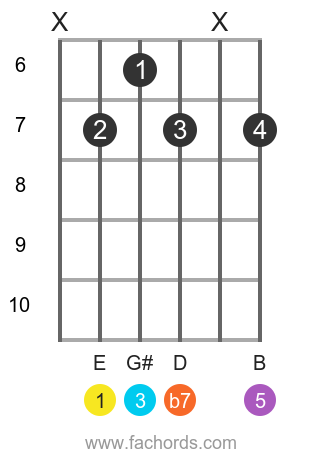 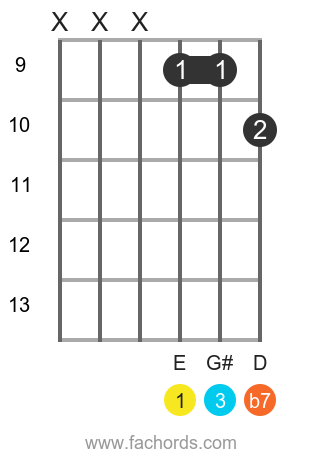 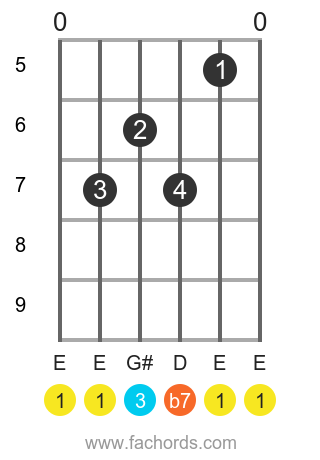 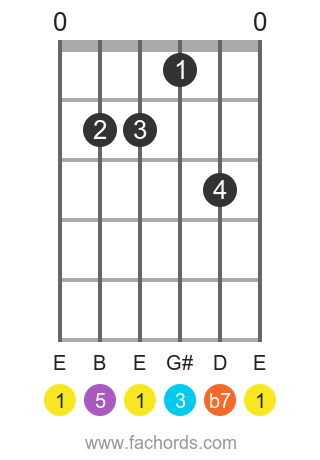 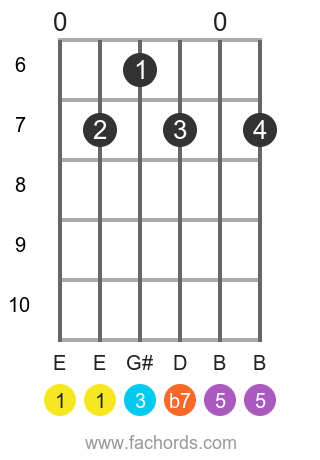 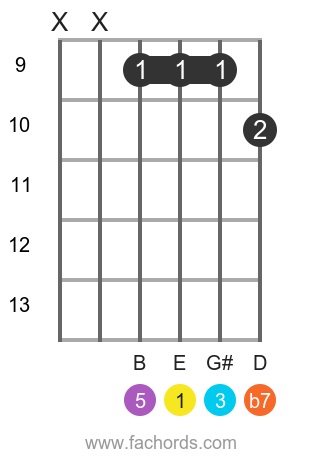 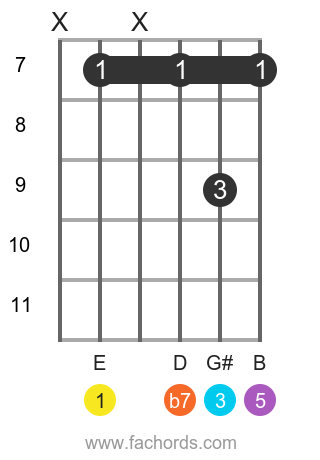 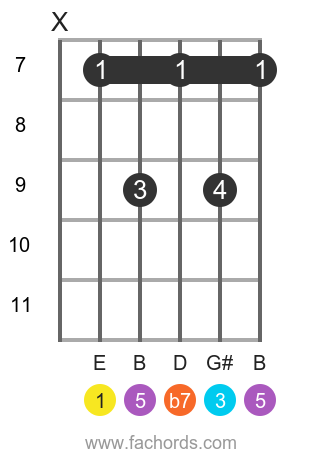 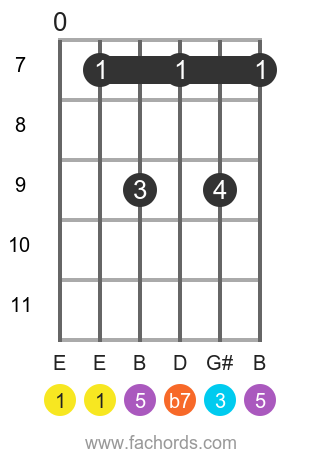 Before we look at different fingerings for the E7 chord on our guitar lets first breakdown the musical aspects of this chord.

Remember the notes for the E major scale are:

An E major triad or chord is made up of the root, major third, and fifth note of that scale, thus E major is EG#B

The E7 tones on the guitar fretboard. Click to zoom

Using the tones above we come up with some of the more popular versions of how to finger the E7 The most common E7 is the open position 020100:

Other common positions are barre chords of other 7ths. For example an open A7 chord is 002020, if we move that position up 7 frets we get an E7 that is X79797. (This is the version of the chord that you will often see played in the funk genre.)

Notice how some of the chords have an X, which means a muted string. If the muted string is the low or high E than it is also fine not to mute those strings.

The main function of the dominant seventh is to lead up to a tonic resolution. For example one very common place you will find dominant sevenths is in blues music and the seventh is often played right before the root or tonic chord. We created an handy chords in keys pdf to help you manage this stuff.

The dominant seventh is often used in rock n roll, pop, and blues. Try playing the progression ADEA, now play ADE7A and you will notice how it gives it a much more bluesy and even rocking sound depending on how it is strummed.

As far as E7 chord use, it is not as common as other 7ths. You will often find it in some folk tunes and a number of Christmas pop songs use it. However, one genre that really loves the E7 chord is funk. You will see E7 often with E9 and E7+9 (which is known as the Jimi Hendrix chord).

In fact if you were trying out to play guitar for James Brown he would have you play E7 and E9 repetitively to give you an idea of what you would mostly be doing on stage! In funk music we usually play the E7 higher up on the fretboard, like the positions shown above

Some specific songs that use the E7 chord are:

The most common keys we will find with the E7 chord is the Keys of A, B, and E.

However you will also potentially find it in some more random places depending on where the songwriter was looking for some tension leading to resolution.