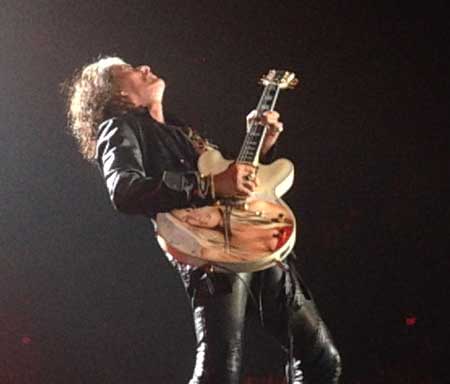 In this world there are plenty of Top Ten lists for the greatest guitar songs , scales , solos , and of course riffs. There are no gold standards and music is always subjective. In this article we will attempt a Top Ten riffs list, at least with some exceptions! First off our list is no particular order, we pick a couple great riffs from each era and we focus on repeated riffs.

For example, Chuck Berry’s famous riff on Johnny B Goode is amazing, historical, and well deserving of the title of greatness. However, that is more of an intro riff, we are picking mostly simple riffs that play throughout most of the verse or chorus, if not the whole song. Which is also why I haven’t included Jimi Hendrix below, his riffs are fantastic but embellished as you would expect from one of the greatest guitar players ever.

Is our list perfect? No, there are a ton of great riffs and classics left out. We have simply tried our best to give guitar students 10 phenomenal riffs that are fun to play and even educational . In fact, the word ostinato describes what we are looking for in each song. Ostinato is a musical term for a repeated phrase in the same voice and pitch throughout a composition. But it sounds so much cooler to just say riff!

This 1958 instrumental was an early example of distortion, feedback, and power chords all making a simple repeated riff that made history. The word rumble was a slang term for gang fights back then so this song had the displeasure of being banned on the radio. This is an easy riff to learn with very simple tablature, the key is to get the right distortion that gives the song that raw power. This song has some serious endurance often popping up in commercials and famous movies like Pulp Fiction .

Eddie Cochrane was not around very long, but he made a big impression on the world of rock especially for young British musicians like George Harrison. Many young guitar players at the time found his simple riff in Summertime Blues to be an easy song to learn. The well known riff is only a matter of switching from E to A and B to E , some folks like to use a B7 (either way use the B bar chord). As you practice this on the guitar it is easy to imagine all the famous 60’s guitarists that once played the same riff !

This song has the wonderful history of originally being written by the legendary Robert Johnson as Cross Road Blues . It is often assumed that this song is about selling one’s soul to the devil in exchange for astounding guitar skills, yet this is never even mentioned at all in the lyrics. Eric Clapton took the song and infused it into driving rock with a repetitive riff. Playing Clapton’s version is not as easy as the last two riffs, but with a little practice it will soon fall into place. It is the rest of the song beyond the riff that is more difficult.

Here is another example of a very simple repeated riff that makes a memorable song. This song released in 1968 is regarded as one of the firsts in the heavy metal genre . It is known for being very long and this guitar riff fills out the extended jam. Easy to play and always fun to sing!

It was a sad day when Bowie died, the world lost a songwriter that was a genius. In 1974 he released Rebel Rebel and to this day it is his most covered song. Bowie himself played the lead riff in this song in all his glam rock style and glory. This song has a habit of getting stuck in your head, the riff just doesn’t want to leave!

Now many lists of great riffs will include “ I Can’t Get No Satisfaction ” by The Rolling Stones, which is understandable because it is a fantastic guitar riff. However, I would make the claim that Can’t You Hear Me Knocking is just as great! When that song starts off it just screams Rock N Roll and the riff remains a powerful bluesy sound throughout the whole piece. Notice that this song has a different guitar tuning , instead of standard tuning we are in open G (DGDGBD) . This is a great tuning to have in your guitar repertoire!

Again many lists may choose Back in Black as a greater riff than Highway to Hell, but where folks like to zig, we like to zag! In all fairness both songs are killer guitar riffs. This was the last album of the lead singer Bon Scott, after he died Brian Johnson took over (the song Back in Black being dedicated to Bon Scott). The song is rather easy to learn and is a staple riff when trying out a new guitar.

When picking the best riffs of the 80s it is hard not to always go directly to heavy metal. That entire decade is filled with an array of awesome and hard rocking guitar licks, but here we decided to pick a historical riff. Money for Nothing will always be associated with MTV and how much the music video changed the entire industry. This song is not too difficult to learn, the key is finding the right pedals and slight delay to get the sound just right. Interestingly, Mark Knopfler wrote the lyrics after overhearing an exchange by workers in an appliance store.

This is another riff that sparked a whole new era of music. Grunge had been around for awhile when this song was released 1991, but with huge success alternative and grunge rock became more mainstream. At first the fellow members of Nirvana didn’t think much of this riff, but after playing it over an over for a half hour they realized they were onto something. The riff is simply four power chords played through heavy distortion (don’t forget to tune your guitar a half step down ), as usual not complicated but powerful. It also sounds great on an acoustic guitar!

The biggest hit of the White Stripes, released in 2003 it has become a song known the world over. It won a Grammy award and proves that even after all these years very simple and catchy riffs are still possible as a guitar player. You would think after nearly 90 years of great musicians playing the electric guitar that all the simple melodies and licks are taken, but of course not. While many people think this was played on a bass it is actually played on guitar using a pedal to lower the octave .

Hopefully, this list has inspired you to take a deeper look at songs with catchy and clever guitar riffs. We left out so many , including lots of riffs more suited for the acoustic guitar! In the comments below tell us what you think are some great riff driven songs!